A Hamilton woman who has turned her redundancy into a budding dessert business is encouraging others to look beyond job ads for their next chapter.

Donna Williams is among the thousands of Air New Zealand staff to have lost their jobs this year.

But despite a year of massive challenges, her new business is taking off - proving to be a recipe for success.

Bright signage greets hungry customers at Gumdrops dessert shop. It reads: "If all the raindrops were lemon drops and gumdrops oh what a rain that would be..."

Williams says it is a fitting phrase - chosen because it represents looking for the silver linings in life.

Williams, Ngāti Tūwharetoa, is a master at finding silver linings - her shop is a new beginning in what has been an incredibly tough 12 months.

In October last year, her mum died from cancer, and 10 weeks ago her husband of 33-years had a fatal heart attack.

In between, the mother-of-four lost her job as an international flight attendant with Air New Zealand.

"Covid came along and we knew that things weren't going to be good in the airline industry - of course redundancy came and so I took my redundancy and put it into the shop."

While a daunting time to be opening a business, she backed her idea.

"In a time where people can't travel, we like to eat us Kiwis, and this shop is as Kiwi as it gets." 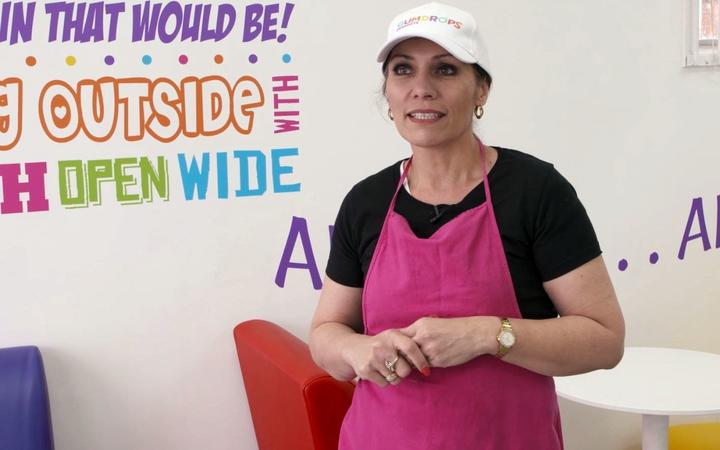 Williams' dream of selling delicious banoffee pies, pavlovas, trifles, and cheesecakes has been bubbling away for a while.

Her husband Jason was her number one cheerleader and the sticky date pudding she sells was his favourite.

Jason was encouraging her right up until the end - she signed the lease on her shop at 5pm and he died about 11.20pm.

"For me, it was a huge blessing, because I know if I hadn't had made that decision, if we hadn't had done that, then I would've been floundering to know what to do in moving forward."

The new business is a family affair with plenty of friends also pitching in to support.

Donna and Jason's daughter Stevie is a business partner after also losing her job this year.

"This has been such a positive experience for our family and for myself having lost my job in the airline industry and just coming here now and setting up, it's like a home for us now."

The desserts are proving to be a recipe for success - the shop opened its doors last week to hoards of hungry customers - they sold out in 90 minutes.

Williams said while some of her former colleagues had also found new pursuits, Covid was turning people's world's upside down and there were hard times everywhere.

She says she feels for those figuring out what their next step is - and encourages them to reach out for help.

"People help heal other people, so when we're around other people that's where our strength comes from."