Mackenzie fire may take months to extinguish, despite snowfall

It could take months to fully extinguish a scrub fire in the Mackenzie District despite rain bringing some relief to firefighters overnight.

The fire has ripped through more than 3000 hectares of mostly wilding pines near Twizel since Sunday.

Civil Defence Minister Peeni Henare flew in to assess the damage and speak to the people affected.

For the past two days, flames have scorched the earth, ripping through wilding pines near the popular tourist attraction Lake Pukaki. 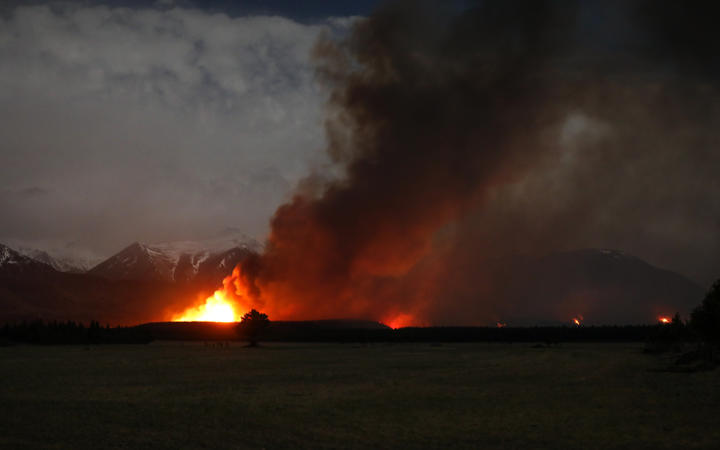 But overnight a southerly change turned the region white with the poor conditions forcing helicopters to stay on the ground.

"We could see the front which ... there were some big flare ups before that, quite significant ones, you know, raining ash around us," Gardiner said.

"It was quite dramatic, the change in weather." 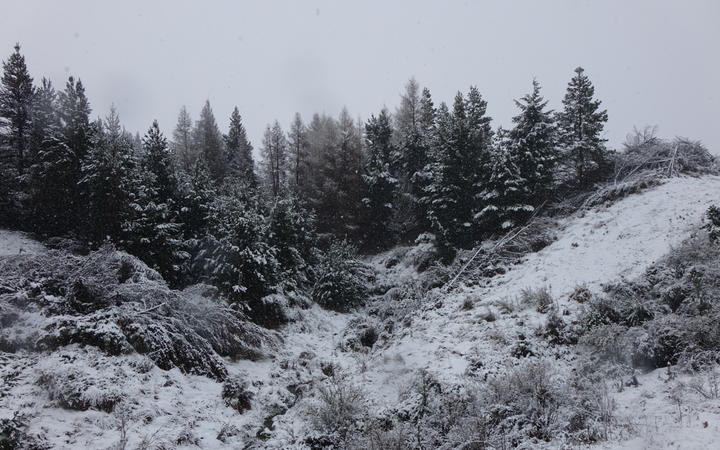 One homestead has been destroyed along with some smaller outbuildings, but most have been protected from the flames.

"At the start shift, there was still lots of flare ups. The whole hillside and the mountains was pretty much on fire ... and then as soon as the front came through, everything just started to die right down," Gardiner said.

"The humidity went right up so fire behaviour really settled and then it started to rain probably about 11pm. By 12am, it was quite heavy and then by 4am, it started to snow." 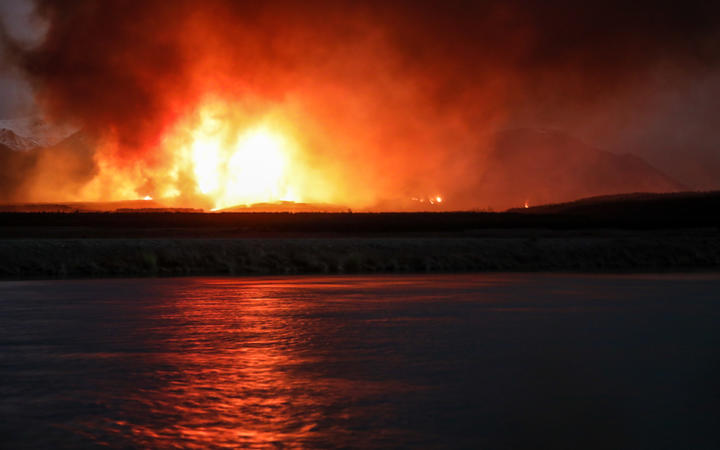 The blaze before the rain and snow settled in. Photo: RNZ / Nate McKinnon

He was relieved to see the front move over and crews heading home.

The community had been incredibly supportive, he said.

"Oh it's been great. The community has been offering their support, been dropping food off at the station, lots of moral support."

Earlier today, the highway to Aoraki Mt Cook was reopened.

Henare travelled along the road to check the damage - but it wasn't quite what he expected.

"I came here to see a fire and now I see a winter wonderland and it belies what actually took place here yesterday which is really surprising," Henare said.

"The footage that I've seen, the discussions that I've had paints a very different picture. Obviously it's what you can't see that's the issue which is why the assessment ... needs to be made about the state of the fire." 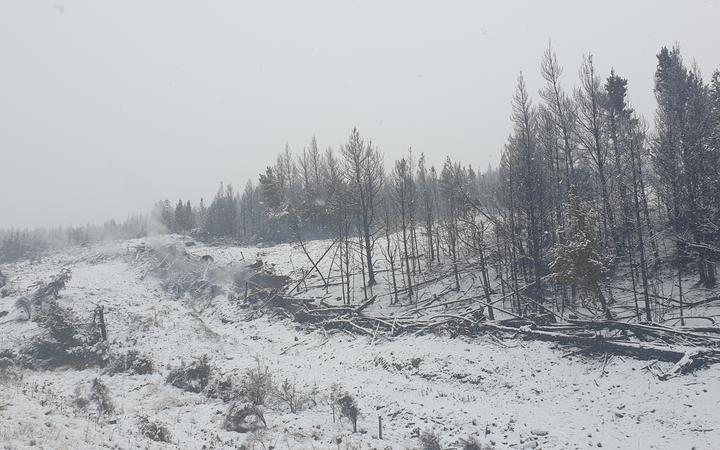 The scene that Henare saw in the Mackenzie country on Tuesday. Photo: RNZ / Tess Brunton

He met with some of the people affected.

"A number of them have lost and have property that's damaged. There is, in our discussions, anxiety and really they're unsure about what the future holds for them. But I know that the good communication from the Mayor's office and also the work that Rob and his team are doing are helping them get back to their properties in the first instance and how we might support them into the future."

No support funding was announced - the minister said the focus was on the fire and he expected to hear more about what the community needed over the coming days.

"Those properties that made a real intention to keep the vegetation well away from their frontages actually helped themselves and so around Twizel here we have areas where there's trees. We need to be more proactive and actually making sure vegetation is not in a position where it can explode and cause property damage," Smith said.

Blaze could stay active for months

Thick snow blankets the area, with the smell of ash hanging in the air.

Instead of flames, smoke rises from blackened branches.

About 15 firefighters were in the field today using heavy machinery to create control lines.

Fire and Emergency incident controller Rob Hands said the fire was hidden, but it was still active and could stay that way for three months.

"The fire's sitting there under a cover of snow. It's not going to go running anywhere, there will be smouldering heaps with heavy fuel loads in different areas and that's something the public shouldn't be concerned about. That's not going to go running towards any property. We've done site assessments on all those properties and we wouldn't be letting the public back into them without confidence that they are safe."

They were working to develop a plan, and expected to be more actively fighting the fire on Thursday and Friday, he said.

While the fire is expected to linger for months, Smith said the Mackenzie District remained ready to welcome visitors.