A Woodville family says it has been a nightmare trying to get funding and support to look after their severely disabled foster child.

They say provider Turuki Healthcare has refused to pay them, stopped and started their payments and won't respond to emails.

Turuki, which took over the contract a year ago, puts the Cooks' complaints down to teething problems.

Ryan shuffles round the living room on his knees, a tablet computer with reinforced cover hanging from his mouth. He doesn't sit still. Pictures on the wall have to be hung high to stop Ryan knocking them off the walls.

In the corner a TV plays his favourite cartoon, Barney. He also loves the song Twinkle Twinkle Little Star. 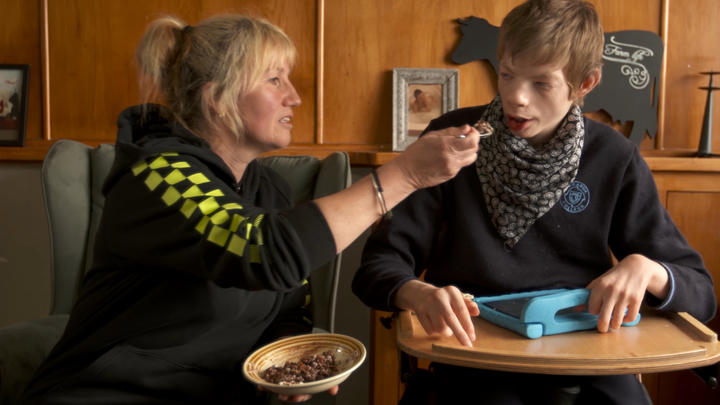 "He also is a little bit autistic, he also was born eight weeks premature, so he has a whole raft of issues going on."

Ryan's brain is a bit haywire, she said. He cannot speak.

"He doesn't have any idea of safety or heat or falling off something, those kind of things.

"Then probably the worst thing he has is a condition called Pica, which means he puts everything in his mouth. It's a sensory thing… so it becomes a huge safety issue."

That means Ryan has to be watched 24/7. It is a routine the Cooks are used to, having had him since he was five months old.

He was taken from his biological mother by social workers one morning after she threatened to kill him. Ryan was dropped at the Cooks that afternoon. As an emergency placement, he was only supposed to stay six weeks.

They quickly grew attached to him however and, fearing what would happen if they didn't take him, gave him a permanent home.

With four kids of their own - the youngest of whom was nine - there was always someone in the Cook family to look after Ryan.

They say they have asked for very little in the way of financial support - a buggy to take him out on the farm, and Riding for the Disabled lessons, which the primary school could not provide. 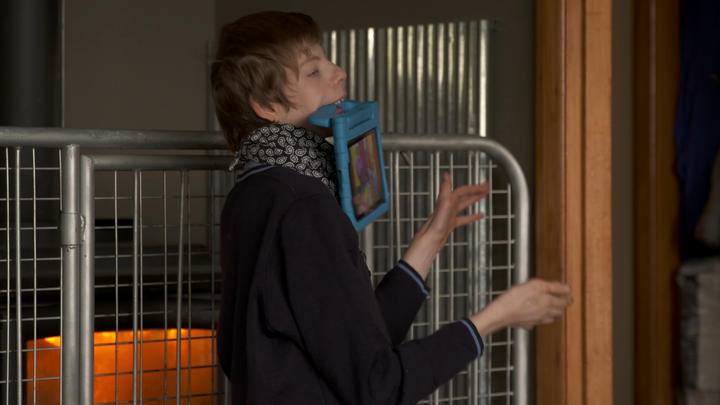 15-year-old Ryan has been in foster care for most of his life with the Wood family. Photo: RNZ

Then at the end of 2018, out of the blue they received a call from Kiistone Business Infrastructure, the organisation responsible for paying foster carers. It offered to pay them $1200 a month for respite care, clothing and equipment - things like toys, which Ryan goes through a lot of.

"We were so eternally grateful because it doesn't cover anywhere near what we spend on respite care but it was a help we hadn't had before, so we were pretty grateful," Pip said.

The next time they heard from Kiistone it was to tell them Turuki Healthcare was taking over in July 2019 but they did not have to do anything.

The money allowed Pip more time to do work on the farm, and after 18 months they factored it into their household budget.

In November, the payments suddenly stopped.

Panicking and desperate to try and sort it out in the busy run-up to Christmas, they frantically tried to reach someone at Turuki.

After hours of emails and phone calls, they still could not get a clear answer on what was needed to reinstate the funding.

"At one point they wanted me to go to Farmers and quote every toy, bib, pair of pants, everything, and… that was just so unrealistic.

"A, I don't have the caregiving money to have a caregiver so I can go and do that and, B, that is just crazy, it's time and energy that didn't need to happen," Pip said.

She finally got an answer out of a manager.

"They said 'okay, we'll pay that'. She said to me, 'I'm a mother so I can understand… I've decided', which really frustrated me because it should never be about a personal choice. Either we're entitled to that or we're not."

The care plan says their funding should be paid directly to the Cooks. But Turuki refused to pay the money into Pip's account, insisting she could not be trusted.

"I felt that was incredible distrust. I'm entrusted to look after a child that has 24-hour care, that literally we keep alive, and relies on us totally, but I can't be trusted to manage any funds. That actually was incredibly frustrating."

Jules Cook said his wife dealt with the bulk of issues around Ryan. He said he was gobsmacked by Turuki's response, which clearly placed a great deal of stress on Pip.

"Just having to try and find that money, and just the lack of understanding she was met with. It was unbelievable.

"We've dealt with a lot of organisations, and hands down they have been by far the worst."

Jules says it's not so much the money, but the attitude they were confronted with.

"There's only so much money to go around and we understand that, but it was just the way that we were talked to, we've never struck that sort of rudeness before.

"You would try and find out what they needed. You'd send emails, and they'd answer the questions they wanted to and ignore other ones. It was just a massive frustrating experience really."

In a statement she said: "When the service transitioned there was a teething issue, which is regrettable. There was some miscommunication as a result of this."

Since Turuki took the contract over from Kiistone the number of families actively accessing the provider's help has more than doubled, while the overall budget has stayed static at $4.7 million a year, an average of $3600 per family a year.

However, Turuki says it still has enough money to meet the needs of its foster families.

That confidence has long been lost by the Cooks. They say in the first phone call, Turuki did not seem to know where Woodville is, and at one point claimed to have no record of Ryan and his needs.

In February the Cooks were emailed to say their funding had stopped, only to receive another one 20 minutes later, saying they would be paid for respite care.

"'My manager has decided' - that was the wording - 'that you can have the respite care but you're not having anything else until a [Needs Assessment and Service Coordination service] is completed," Pip said.

That assessment was to be done by an organisation based in Palmerston North called Mana Whaikaha.  But even that was fraught.

"Mana Whaikaha didn't know who [Turuki] were, why they needed it. They never actually even filled out a proper application for an assessment. They just sent an email. That sat there for about three months, and they [Turuki] kept saying 'we're not doing anything until we get this assessment'," Pip said.

When the payments did not arrive, the Cooks rang Turuki, only for Jules to receive a text message saying they had not been paid because Turuki had "forgotten' to pay them.

"I'd like to be treated with respect. It's a really, really hard job we do and to be treated with distrust, no respect, treated like we're trying to get something out of the system, whatever it is, is just horrible. It's a fight we shouldn't have to be doing," Pip said.

"All foster parents who do that, 99 percent of us do it because we genuinely care about these kids, and we need support."

In a statement she said: "I am very sorry to hear that the Cooks felt this way and it is not the level of service we aspire to. While we can't verify these allegations, PCSS would never want any caregiver or child or young person to feel unappreciated."

Oranga Tamariki said it met with Turuki quarterly to discuss issues that arose with the service and conducted an annual monitoring review, although this had been delayed because of Covid-19.

It said Turuki was one of seven organisations which tendered for the contract and had delivered health, wellbeing and social services for 20 years, but not in foster caring.

It expressed surprise when told of the Cooks' experience.

"Since the Permanent Caregiver Support Service was contracted to Turuki Healthcare we have been pleased with changes that have been made and we believe it has benefitted caregivers and the young people they care for.

"We meet regularly with Turuki Healthcare to discuss progress and no issues have been uncovered that give cause for concern," it said in a statement.

Meanwhile, the Cooks are baffled by claims of "teething problems", saying their payments were already set up.

They want to know how Turuki has addressed these problems, but they are still waiting for a response from Douglas to their email in February.

The assessment has been done and they are onto their third social worker in nine months.

Whatever happens they say they will look after Ryan regardless of the money, but they don't want others to have to battle the way they have.