At least 1000 people queued in Queenstown for a Covid-19 test after a recent visitor tested positive in South Korea.

People started lining up for a test about 40 minutes before the temporary testing site was due to open at 9am.

Queenstown residents Ross and Rose, both in their 70s, were first in line.

"We feel it's better to be safe than sorry. This pop-up testing opportunity is here today so we decided to take it," he said.

"We're in a very vulnerable group and we felt it's essential to come, and look, it's all here for us. They couldn't have made it easier. It's seems beautifully, perfectly organised and we're very impressed," she said. 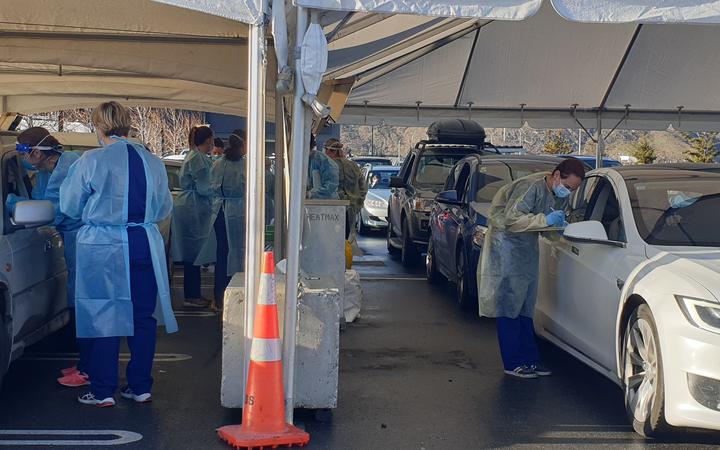 Organisers WellSouth started testing before 9am as cars kept joining the three-lane queues and people walked in for tests. 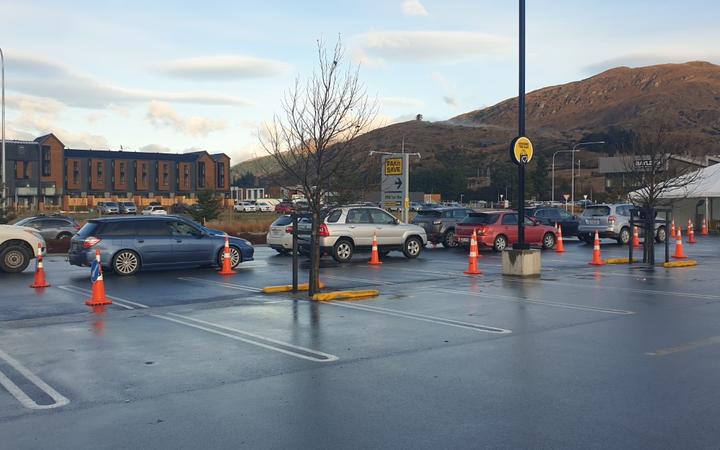 By 8.35am, nine cars were already lined up and the queue kept growing. Photo: RNZ / Tess Brunton

By 9.30am, 100 people had been swabbed. One of them was Greg who works at a skifield near Queenstown.

"If there's anyone in Queenstown that's likely to come in contact with someone, it's one of our lovely ski field workers. We're up there, we're interacting with the public, we're giving smiles, high fives. We're helping them up off the ground and we see people from all over New Zealand," he said.

Queenstown resident Jeff was waiting in line for 15 minutes, and said he expected the queues.

"People want to do the right thing, but they should have far more booths and so it's a bit ridiculous having to wait this long."

WellSouth started out with 400 tests prepared for the day but having tested 400 people before midday, had to get 500 more to cope with the demand. 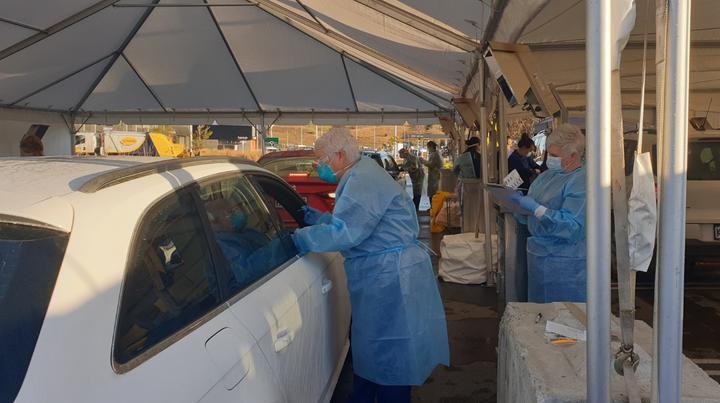 Medical director Stephen Graham said they had not been sure how many people would show up, but wanted to prevent an outbreak similar to what was happening in Victoria, Dr Graham said.

"In these places, there's been low levels in the community for a period of time and then it gets out of control by the time you find it. There's a whole lot more cases so we're trying to test now and pick it up - if it's there - before it becomes more widespread."

Queenstown residents William and Derna both work at one of the businesses the traveller visited and were happy to get it over and done with.

"It sucked, but it's not like a terrible thing," he said.

"It's just really uncomfortable, that's all," she said.

Nurses Jess and Sarah provided a Covid-19 test with a swab that looked a bit like a long flossing brush.

It was a bizarre sensation as one nostril was swabbed. The swab was over in about 15 seconds.

Uncomfortable, but not painful.

There was also an option to get a blood sample to check if people have been exposed or have previously had Covid.

Angela got both tests done and she said they would not be testing if it was not necessary.

It was less invasive than what she was expecting.

Dr Graham said the more testing they could do, the better.

"We want to be doing lots of testing so if it's there we find it or we can - as much as possible - find out that it's not there."

Most people can expect their results over the coming days.