Boy with disability living in garage, as family waits on Housing NZ for home

The life of a disabled boy is being put at risk because his family is forced to live in a cold garage due to a lack of appropriate housing, a South Auckland social worker says.

Associate housing minister Kris Faafoi has tonight apologised to the family, and has requested their case be expedited tomorrow.

Seven-year-old Jerasaiah has cerebral palsy and relies heavily on a wheelchair. His eight-year-old sister has epilepsy.

With their mother Maria they have been camped out in a relative's garage for six months, all through lockdown, sleeping on a shared double bed.

In January, Maria and her two children moved home to New Zealand from Australia to escape a violent relationship.

She is on the housing waiting list; but Maria told RNZ's Checkpoint Work and Income has so far directed her to several unsuitable properties, including motel units with stairs and no disabled access for her son.

"He needs full assistance from me, so I do everything for him. He can't actually walk to the toilet or anything, I have to take him out of his wheelchair and put him into his commode to take him to the toilet," she said.

"I have to feed him, he can only pick little bits and pieces, bites of food."

Jerasaiah is a happy boy with a big smile, a keen curiosity, and he is a whizz in his electric wheelchair. Like a lot of kids his age, he loves video games. It is something he can do without much help and it keeps his hands and fingers nimble. 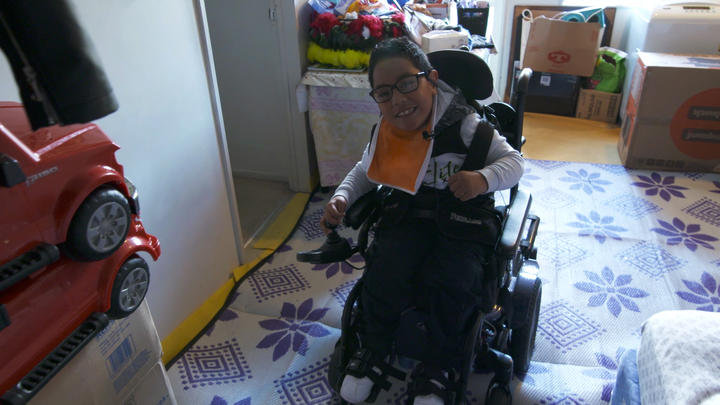 Jerasaiah and his family live in a garage while they wait months for Housing NZ to provide an appropriate home. Photo: RNZ / Nick Monro

When Jerasaiah gave Checkpoint's Lisa Owen and Nick Monro a tour of his shared bedroom in the garage, it was clear how much space he needs to be able to use his wheelchair safely.

At one end of the room is the garage's roller door, not far from the bed the family of three share. Their possessions are boxed in tidy stacks around the perimeter, and clothes hang neatly from the garage door's overhead rail. There is not a lot of space to move.

The garage is also the household's laundry, so there is a sink and a washing machine a few metres from the bed.

Maria, Jerasaiah and Alarhia sleep sideways on the bed so they all can fit. It means Maria's legs hang off the end.

The garage is not insulated, so they need a lot of blankets as the season gets colder.

"It's hard, I always have to get up late at night just to turn my son, because he can't roll over on his own. So every night it's like 2 or 3am, I have to toss him onto the other side. He weighs over 30kg now."

The garage is attached to a unit, home to Jerasaiah's great nana who turns 96 this year. She also relies on a wheelchair, and on her carers - Jerasaiah's grandma and grandad.

It is a Housing NZ property, and the family is worried they are breaking the rules of their tenancy with the rest of whānau in the garage.

There is not enough room for the gear Maria ideally needs to care for her son, including a hoist. She does all the heavy lifting unaided, which involves maneuvering him between the bed and his chair.

Changing her son's nappy is a workout, and on top of that there is the night-time lifting.

"I cant really sleep at night, because I have to make sure whether they are warm enough, especially in the garage. I don't want him to get sick because once he gets sick it's more worrying, more stressful to me," Maria says.

"I worry all the time when it comes to my son. I just try and do the best I can for him, but I can't really do much at the moment because we don't really have the space we need to have for him to have a proper sleep and things like that."

Her biggest fear is that Jerasaiah might get sick and have a seizure while they're asleep, Maria says.

Maria's fears are grounded in stark reality. About six weeks into their stay in the garage Jerasaiah was rushed to hospital after suffering a prolonged seizure. According to his Middlemore Hospital medical notes it lasted almost 20 minutes and was followed by vomiting.

Maria had just left the garage to get his breakfast. When she came back, her son's arms and head were jerking, his teeth clenched and mouth frothing.

She told Checkpoint she went to Work and Income for housing help in February, with details of Jerasaiah's disability and health issues. She says she made it clear where they were living.

"They know I'm in a garage. When they first did my assessment they knew that I was in the garage."

She was shown properties in February including motels, but none of them had wheelchair access. Work and Income said it apologised for that.

Even at the unit in South Auckland, the family has had to improvise with a makeshift ramp knocked together from some leftover wood so Jerasaiah can get in and out of the house on his own.

In a statement to Checkpoint the Ministry of Social Development (MSD) said its ability to give assistance to Maria and her family during the Covid-19 lockdown was limited.

MSD said it was in phone contact with the family. Maria said they called just once during that time.

The ministry says Maria was on the waitlist for a four-bedroom modified house in Manukau, but affordable accommodation is tight across the country, including in Auckland, and it cannot say when a house that meets the family's needs will be available.

"It's not okay, it's not okay for any family in this country to be living in this situation ... we have the resources, we just simply lack the will to turn those resources into housing that people can actually live in and housing that is suitable for a diverse range of needs."

Russell says the family's living conditions over winter could be potentially lethal. His message for MSD is to get its act together.

"Address this family's needs, stop pretending that they're just one of 20,000 on a waiting list, and actually be kind to this family and get them into a house that will protect this boy's health."

"I think we've got to make sure we've got as many New Zealanders as we possibly can living in conditions that are good," he said.

"An apology has been made which is the right thing to do and MSD will be in touch with the family tomorrow to try and expedite the efforts to try and make sure that they can find an appropriate place for them to live."

He said a mother in Maria's situation should not be living in a garage.

With 65,000 Kainga Ora houses in total, about 4000 had been modified in some way make them accessible for people with disabilities.

"Also a target has been set for the new homes that we are building as part of the public housing building programme of 15 percent of homes that have universal design principles which essentially means they'll be accessible for people with disabilities."

He said although 4000 houses were on the books as having been modified, he admitted that could include only adding a handrail. He did not have further detail on how many houses were fully accessible.

There was huge demand for accessible properties, he said, with 930 people on the waiting list for being moved to a house with accessibility appropriate to their disability.

'It's really hard, I struggle'

MSD earlier said it was working on what support it could give Maria while she waited for a suitable house. It said it had also referred her to the Ministry of Health.

For Maria, after nearly six months in the garage, she has had enough of waiting.

"It's really hard. I struggle. I struggle a lot but there's nothing I can do, nothing anyone can do. It's my son and I would do anything for my son," she says.

The day Checkpoint approached MSD about Maria's case, it reviewed her priority rating for housing, raising her up four grades from A12 to A16. The highest rating is A20.

In a statement, the Ministry said it had "reassessed Maria's priority rating to more accurately reflect the challenges of securing housing with wheelchair access".

"This had not been fully considered in the initial assessment."

It did not specifically respond to Checkpoint's request for an interview.