Dunedin music venue The Cook is getting a new name because its owner says the current one is hurting people unnecessarily.

On the back of the Black Lives Matter movement, questions have been raised about the future of monuments, streets and businesses named for colonial-era figures, with controversial roles in colonisation, the slave trade and in some cases the slaughter of Māori.

Last Friday Hamilton City Council removed a statue of the British army captain John Hamilton from the middle of town.

Now Mike McLeod – the owner of the music venue and student watering hole in Dunedin's Captain Cook Hotel – is looking for a new name.

"Recently people have pressed me quite hard on the matter," McLeod told Checkpoint.

"Then I started thinking about little details about whether or not Captain Cook was a good or a bad person, or whether he is really responsible for colonisation.

"Captain Cook doesn't have anything to do with my music venue, and I just realised that people were people were hurt by the name. And it's not a name that I'm especially proud of at all and it doesn't really have much to do with my business. 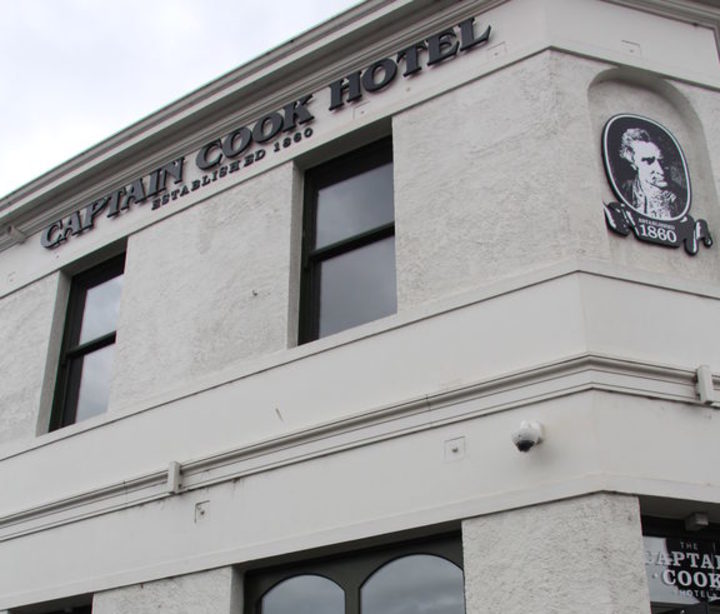 An older image of the Captain Cook Hotel in Dunedin. Photo: Darryl Stack

"I don't have too much of a view on Captain Cook, but … I think he's become a symbol, rightly or wrongly, for colonisation and oppression.

"For some people seeing a name or seeing iconography attached to him – that's what that symbol represents. Whether that's fair historically or not is not really for me to decide.

"I don't have a strong desire to keep it. We're a music venue, we're not a British Navy museum. There's no reason for us really to have any association with it, it doesn't really represent what we do anyway," McLeod said.

He has been getting positive and negative feedback.

"Last night I got trolled on my personal Facebook page, I've got my business Facebook, so I think some people searched and found me.

"I was called a culture thief, a virtue signaller… Just like being back at high school really, being bullied in the school yard."

His job now is to find a name that works better. He's not sure if he will stick to any similar historical theme, but he would like to talk to local iwi about one idea related to Kupe and the name Aotearoa.

"But I mean I might just distance myself from the whole thing altogether and call it something else, I really don't know at this stage.

"I'm not here to teach people history really, I'm a music venue and I don't want to hurt people along the way."

He said there are a lot of people threatening to boycott his restaurant, which does not exist anymore. The restaurant was on the ground floor and was called the Captain Cook Hotel, but it is now a Sal's pizza outlet.

"People are putting a lot of effort into something that I don't think really, if they really thought about it I don't think they should really care."