Auckland's Papakura Marae has seen dozens of families arriving at its doors each day seeking emergency help and support since the lockdown. 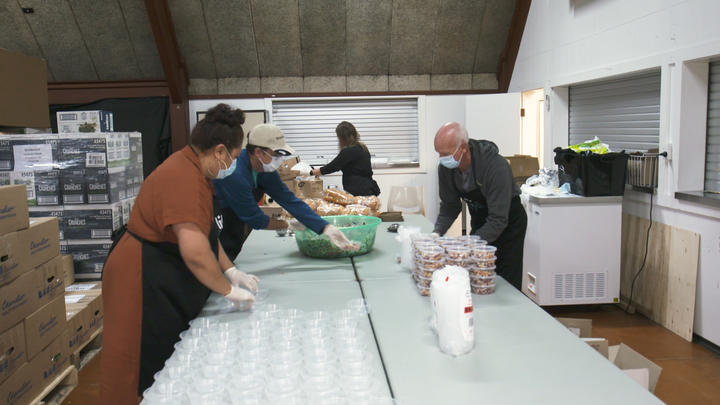 Many of them had lost jobs due to Covid-19 and some were forced to go on the benefit in just the first week of lockdown.

As the rate of poverty in New Zealand rises due to the impact of the global pandemic, there have been calls for the government to urgently increase benefit levels even further.

First Up presenter Indira Stewart and cameraman Dan Cook went to the Papakura Marae Soup Kitchen where many visiting families had lost their jobs and gone onto the benefit in just the first week of lockdown.

During the day, the Marae hosts a foodbank, and two nights a week it partners up with LIFE church who's provided volunteers and funded hot dinner meals for families to pick up and take home.

On one evening, solo mother Brooke was among many struggling families to arrive on a cold night with kids in tow.

"Things are a bit hectic, I have six children and they're kind of running hectic in the carpark," said Brooke.

"I've actually become a single parent, just recently, just before the lockdown. So, it's hard. It's definitely hard."

Many of the kids arriving with their families were dancing around on the footpath by the Marae's community hall in their pyjamas, happily greeting the welcoming volunteers and excited to be out of the house for once.

Brooke said she was grateful for the free dinner meal she picked up at the Marae to feed her family, but was surprised when a volunteer follows her to her van as she leaves with a trolley of groceries to fill her boot.

Indian father, Shirazz, said he was taken aback by the same generosity on his first night visiting the Marae. Shirazz is now on the benefit and hoping to be back working in the next couple of months.

"They treat me like family, you know. This is my first time coming here so I'm glad that something came up."

Karl wasn't able to work during the lockdown and said things have been tough. 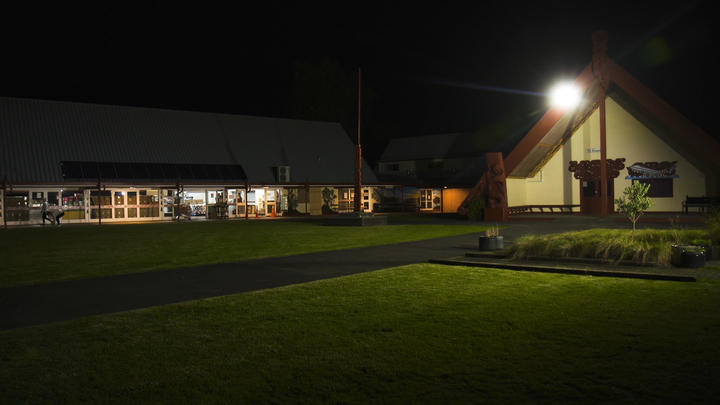 Papakura Marae, where a team of volunteers is helping those in need under lockdown. Photo: RNZ / Dan Cook

"That's always in the back of your mind - Where's the money going to come from? and without that, how we're going to get through?," he said.

"The garden has been there helping us out but not enough, just to a certain point."

"I don't think words could express how grateful we are for this support that our local Marae has given us. Every little bit helps." said his partner Nane

Since level 3, LIFE church had to nearly triple the amount of dinners it's making, with about 750 dinner meals going out across the city in just three days last week.

It hoped to open more of its soup kitchens as soon as it's safe to do so, but for now was operating two nights a week at the Papakura Marae and one night at its south Auckland church.

Papakura Marae Chief Executive Tony Kake said the impacts he was seeing in his community from Covid-19 are extreme.

"There's a lot of families that are now turning up - the new unemployed and they're doing it tough. So any little food parcel that we can provide can help get them through the next day and the next day," said Kake.

"The poverty is extreme but we try and sweeten that up as much as we can, in any way we can. [Because of] Covid, we've seen a lot of tough times. We've seen a lot of familiies who had an income one day and now they're reliant on a benefit or have to go and line up at Work and Income."

In just the first month of lockdown, 33,000 more people went on a benefit - bringing the total number of people in New Zealand on all benefits to 335,000.

In the worst case scenario, the Ministry of Social Development said it could see an increase of up to 288,000 more applications for welfare.

The massive increase would almost double the number of people on benefits in New Zealand.

Many of the families coming through to the Papakura Marae and LIFE's other soup kitchens were among those who had lost jobs due to Covid-19 and who would join the flood of welfare applications to MSD in the coming months.

As part of the government's Covid-19 economic response plan, it had increased weekly benefits by $25. 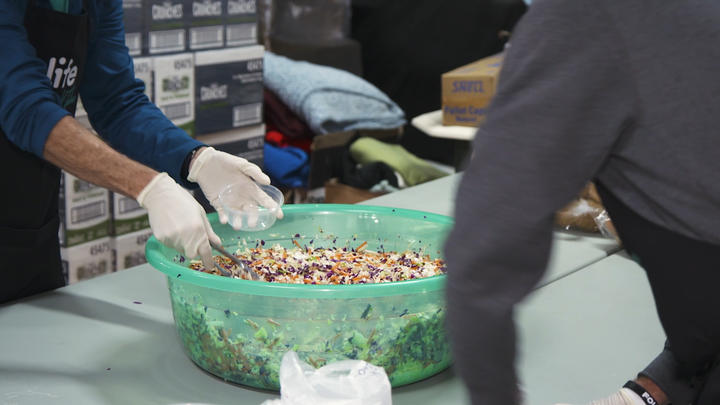 But the head of the New Zealand Council of Christian Social services,Trevor McGlinchey, said that figure wasn't enough before Covid-19 - and it was certainly not enough now.

"As a member of the welfare advisory group we think that the recommendations from that group should have been implemented and implemented quickly. Going into this crisis situation, we can't afford to have more and more New Zealanders living in complete poverty," said McGlinchey.

"We need to ensure that peoples' incomes is actually based on what it costs to live. We pick a number out of the air and say 'this is your benefit level' but it's got nothing to do with how much it costs to live."

The NZCCSS had been tracking poverty levels in New Zealand since the Global Financial Crisis.

McGlinchey said New Zealand was already seeing a high poverty rate before the pandemic because of the impacts of the GFC. Now, those levels are soaring.

"The biggest thing was feeding people. The charitable sector stood up and began delivering food immediately at the start of the lockdown and it took somewhere between 7 and 10 days before the Civil Defence Emergency Management schemes were actually able to get started and support that food delivery process," said McGlinchey.

In the past, the NZCCSS said the government relied too heavily on community organisations, charities and social service providers to step in and meet the needs in their communities.

As part of its economic response plan to Covid-19, the government has put $27 million towards social sector services, and community groups so they can continue doing their work.

McGlinchey said it was now crucial that the government worked together with people on the ground to help tackle new levels of poverty in New Zealand.

LIFE Volunteers Brian and Jenny have seen it first hand.

"We know the level of poverty with the people around here and even before this happened, people were in dire need. All the more so now. It's really sad and indicative of how many people were actually closer to borderline [poverty] before the lockdown happened and now the lockdown has basically tipped a lot of them over that threshold," said Brian.

"It is a very sad thing to see but it's gratifying that we can actually be there for those people when they really need it."

Volunteer Cook Jenny said she was chomping at the bit to get out of the lockdown and start helping the community.

"The whole time we've been in lockdown has been a struggle for me, just wondering how people are going," said Jenny.

"Are they getting fed? Have they got meals? It's just something that you don't take for granted."

Husband and wife Tindall and Nia say they know what it's like to do it tough and they're serving food because they want to give out hope, especially when many are in hardship.

"Just being in that position you know, just knowing how it is. Being in the same shoes...there are times when we have it and we don't have it and it's ok to say 'hey, I have a community that's available to back me up'," said Nia.

It's a message Tony Kake reiterates everyday to those arriving at their door.

"To whanau out there, hang in there. There is light at the end of the tunnel. Let's keep moving towards the light and be kind to each other."