The government's wage subsidy scheme has been paid to nearly 1000 companies who should not have received it.

More than $10 billion has been paid out to businesses - the bill is now more than half of the government's total $18.3b health spend for all of last year.

Thousands of applications for the subsidy continue to pour in every day, with dozens of family trusts among those receiving the money.

Checkpoint has been told an update on the audit process is due to be announced soon. 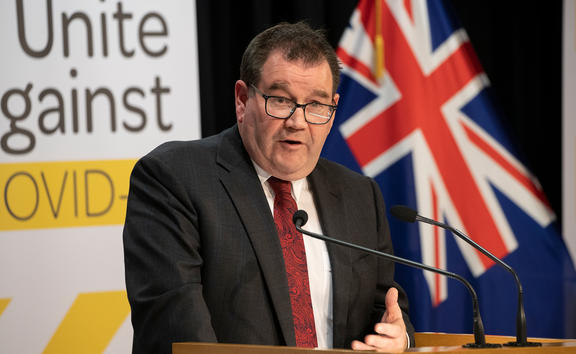 Minister of Finance Grant Robertson speaking at the briefing for a Covid-19 daily update on 17 April, 2020. Photo: Pool / NZME

On Monday, Finance Minister Grant Robertson told the Epidemic Response Select Committee the scheme was proving hugely beneficial, with 410,984 applications approved of the 519,788 that had come in.

"We're this far into the scheme and yesterday there were 5145 new applications."

The criteria for receiving the payment means any business which had an experienced, or predicted 30 percent drop in revenue during any month this year, compared to last year, is eligible.

The payments of $585 per week must be passed on to employees.

Payouts include Coca-Cola (which has been able to continue operating at a reduced capacity throughout the lockdown) on $7.1m, Trade Me on $4.1m, Fisher and Paykel applicances on $7.7m, Michael Hill Jeweller on $2.2m.

Some local councils have received the cash - Waikato, Taranaki and the West Coast Regional Council.

And there are also dozens of family trusts - which are often used to protect assets - getting the payment.

Unite Union National organiser Mike Treen said he understood the scheme was a high trust model, but didn't agree with the trusts getting the payment.

"Family Trusts appear principally as a mechanism to avoid taxation rather than anything else, that's what they seem to have been established for.

"It seems to me they don't do any other sort of productive purpose so I can't see why they should be getting a subsidy."

He said thorough auditing needed to be done to make sure the system wasn't abused.

"Hundreds of thousands of workers are losing money and the intention was at least the jobs would be maintained, but some companies will be trying to profit from the government's largesse when I don't think that they should be."

But chartered accountant Dennis Moodley said he wasn't suprised to see family trusts getting the money, as the wage subsidy was there to keep people employed - irrespective of the entity structure.

He said one of the main reasons family trusts were originally formed was for protection of family assets, but had since changed to become used for trading.

"If they started trading and needed employees they would have employed staff."

He said no system was going to be flawless and it was important to focus on getting the money to people who needed it the most.

"It's not a time to be greedy, because that's just going to make the situation worse."

The Ministry for Social Development is responsible for the wage subsidy scheme - it said as at April 17, 39 applicants had been asked to refund all or part of the subsidy, and 22 had returned $149,000.

There have been 897 voluntary reimbursement offers, with 460 so far returning $3.95m.

In a statement, the Finance Minister said an appropriate audit process was being prepared to act as a backstop for the scheme's high-trust model.