New Zealand's largest indoor stadium has been transformed into a food bank to help feed thousands of households going hungry during the lockdown.

As cases of Covid-19 start to level out, the number of people struggling to get food on the table is not letting up.

Auckland Council has had 3000 requests for help since announcing last week that it would be providing emergency food parcels on behalf of the government.

The council has now set-up a food distribution centre at Spark Arena to keep up with demand.

Anyone who is unable to go to the supermarket, or is suffering financial hardship as a result of the lockdown, is eligible for the food parcels, which are being couriered to people's homes.

Around 900 packages were sent out yesterday and staff were on track to distribute another 1500 today.

It is expected that there will be around 5000 parcels sent out a week once demand stabilises. 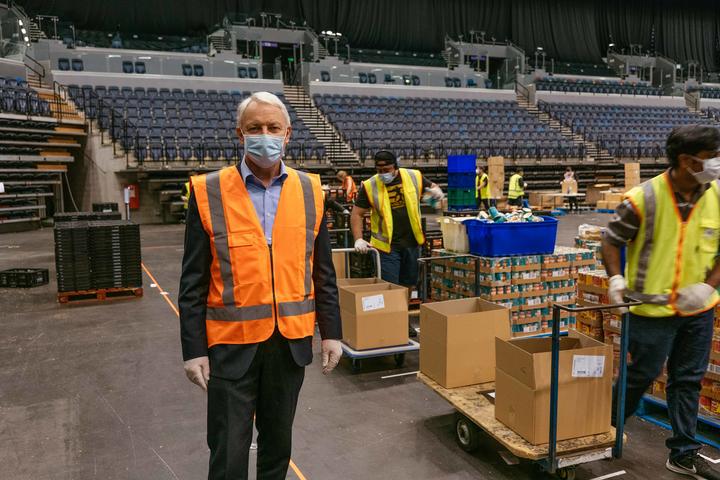 Mayor Phil Goff said the transformed Spark Arena was evidence of the unprecedented situation the country was in.

"We're all in this crisis together and we certainly don't want to see parents that can't afford to put food on the table for their kids."

The government is covering the cost of the food, while Auckland Council is operating the contact centre to respond to calls and coordinating the supply, packaging and delivery of food.

It has been a massive logistical undertaking to get the arena set up, everyone heading in has to have their temperature taken, hands sanitised and to use personal protective equipment (PPE) - they simply cannot afford to have the operation compromised.

Spark Arena is being used as a foodbank. Photo: Bryan Lowe

But managing director Stuart Clumpas said they had adapted quickly - many of the staff have lost other work through cancelled events at the arena.

"A couple of the arenas in Europe have started to be used for makeshift hospitals so we'd already got our heads around the idea that we'd get asked to be a makeshift hospital, and we were already kind of gearing up.

"We didn't quite expect this, but hey, we're really pleased to be part of helping."

Of course the struggle is not limited to Auckland - foodbanks right across the country are recording massive demand for help right now.

Stuart Clumpas said the economic impact of the lockdown is huge.

"As a cautious Scotsman I'm always expecting the next day to be a rainy day, and this is more like a complete bloody monsoon than a rainy day, but nonetheless, so far so good.

"But it's hard when you have to stop economically."

Phil Goff said costs for the operation were likely to be in the millions, and the service is expected to last as long as the lockdown goes on.