A programme to install webcams on Kāpiti Island is being expanded in an effort to clamp down on illegal poachers.

The first webcam was installed at the end of 2018 and another last year. The group behind them, Guardians of the Kāpiti Marine Reserve, say they are already having an impact.

In 2019, the Department of Conservation (DOC) recorded 15 instances of things like issuing warnings and prosecutions - more than double the previous year from when there was no webcams watching.

Ben Knight, chair of Guardians of the Kāpiti Marine Reserve, said the reserve - which was established in 1992 - was home to large numbers of crayfish, paua, butter fish, snapper, and blue cod.

"It's home to quite the bounty of high value marine species... ecologically, but also economically to some people," he said.

"Even just out here last summer I was diving right in front of the DOC base... we found fishing gear, hook, line and sinkers on the bottom out here." 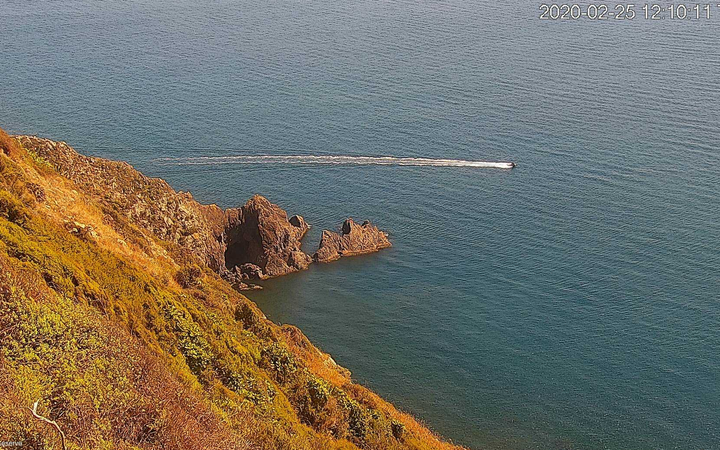 View from one of the webcams at Kapiti Island of Kapiti Marine Reserve. Photo: Department of Conservation

But he said enforcing the rules around illegal fishing was tricky for the local DOC team - as the nearest patrol boat was based at Mana, a 25km trip away.

That sparked the idea to install the webcams. They could be viewed and controlled remotely by the Guardians group or the authorities for surveillance.

Knight said since the first one was installed there had been a large jump in offences reported - 200 percent to 300 percent - that would have otherwise been missed.

The group now planned to install more - starting with one at Tuteremoana, the peak of the island, he said.

It would be more advanced than those already installed.

"The camera will have 45 times optical zoom, it's also got some new tech that will enable us to get a chart position for any object we are zoomed in on and focused in on."

That camera - which would cost about $20,000 to purchase and install - would look west, towards the part of the marine reserve not viewable from the mainland.

Knight hoped it could be installed before next summer.

Meanwhile, DOC in Wellington confirmed to Checkpoint there are no plans to purchase another boat, and is applying for funding to replace the one boat they currently have which is 15 years old.