'Shut it down' - a call to close Oranga Tamariki

"Shut it down." That is the message for Oranga Tamariki from a prominent Māori leader.

The chair of the Whānau Ora Commissioning Agency,  Merepeka Raukawa-Tait, says Oranga Tamiriki has a toxic culture and has been riding rough-shod over families - taking babies without any consideration for the devastating, intergenerational impacts.

Her comments follow a damming report into an attempt to remove a six-day-old baby from his 19-year-old mother in Hawke's Bay.

The internal review that identified a litany of errors prompted a public apology from the boss of Oranga Tamariki and immediate policy changes.

The attempted removal was documented by Newsroom, showing officials repeatedly attempted to get the mother to give up the child, while whānau and the mother's midwives were kept outside the room.

Oranga Tamariki apologised on Thursday, and admitted failings in the way it tried to remove a baby from her mother.

The agency says it will now make changes to its approach, while the Minister for Children says she won't be asking for the agency's boss to resign.

And as several other iwi-led investigations are underway, Oranga Tamariki says it will change its policies and connect with whānau better.

But Ms Raukawa-Tait says the practice of removing children should be shut down.

"I would prefer that we didn't have a state department anywhere near, particularly tamariki Māori. We have to accept, Māori have to accept that we will own our own issues, we will provide the solutions, we will look to the people who are in the communities right now and I'm talking very much about the Māori service providers – Whānau Ora navigators and others who are in the community."

Closing down Oranga Tamariki "would be a damn good start," she said.

"The state never has never done a good job at caring for the children, so put that $1 billion that was allocated to [Oranga Tamariki] this year in the Budget, put that into the families into the organisations who don't have the money to do the breadth of the work that they should be doing."

Ms Raukawa-Tait expects all of the reviews into Oranga Tamariki will be damning.

Māori can look after themselves if given the support to do so, Ms Raukawa-Tait said.

"The government says it's committed to making changes for Māori. If you are then let Māori make the changes for themselves, as hard as it might be for Māori to confront some brutal facts... there are some brutal facts that we have to confront, but the government won't confront those, their only solution is 'get those kids out of there, separate the mothers from the children'.

"We know the lasting trauma that has, and the children never come back as adults back to the whānau so that they know their place."

Ms Raukawa-Tait says she has little regard for those who suggest Māori have not been able to help themselves already.

"What have those people ever done to assist Māori to be able to take their place in this country as full contributing citizens?

"What we have to understand is that in New Zealand we've had piss-poor policy over many years that has relegated Māori to the sideline.

"We have seen structural reform come to this country in the 1980s that absolutely had a devastating effect on many Māori families.

"There's been a chronology of events in recent times… that have not supported and helped Māori families to get to the stage where they can contribute.

"I'm on a health board, I've been there for nine years… I can tell you if you want to see discrimination look to our health boards, up and down this country.

"We have to support those families to know that there is another way that they can get through life, and it is with the support of the wider community, with knowing who they are, be proud of who they are and knowing that they have a right to contribute in New Zealand society.

"I'm very, very angry Lisa, I've been in this space for such a long time. I've seen what has happened for Māori women's access to justice. When they come through the court system where they try to report domestic violence family harm, rape, all of these things - I've seen them brushed to the side, our children brushed to the side."

"And still, the government department is saying 'we know what's best for you'. They do not."

"I think we have caused hurt and harm, and I'm deeply, deeply sorry about that," she told Checkpoint.

Ms Moss said the big issue that struck her from the report was the way Oranga Tamariki staff tried to make the uplift without the family's cooperation. 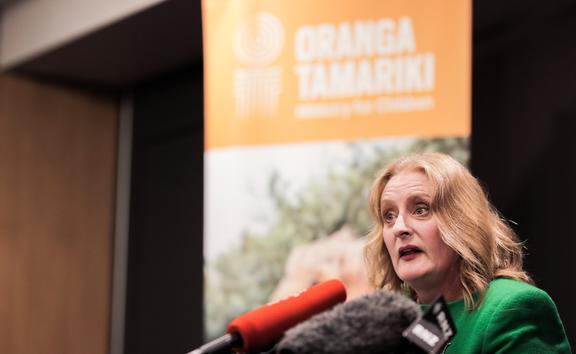 "The lack of engagement, both with the family and externally, I think then led to a series of events and meant that we didn't have, the practitioners didn't have, all of the information that they should have collected and needed to have to make the right decision.

"We don't think we're always right, and actually I'm very clear that we aren't always right. We also don't have the solutions. And we need to make those solutions together and this report reinforces that.

Ms Raukawa-Tait told Checkpoint she does not think trust can be rebuilt with Oranga Tamariki and Māori.

"We have to strengthen the families. I don't want to see any more money going in to make a government agency smarter and uplifting children, Māori, or others."

In the case of the Hawke's Bay attempted removal of a baby, Ms Raukawa-Tait said it appears the social workers involved had become institutionalised, and were not behaving according to kaupapa Māori.

"For them to make a call like that, and to be so disrespectful and distrustful of the family, the kaumatua and the midwives, I just think that was disgraceful behaviour.

"We wouldn't even know about this case had it not been for that brave family… They've had to put themselves on the line in terms of people know now who they are.

"They were brave enough to say 'bring your cameras in, this has happened once before, we don't want it to happen again'. We would never have known that this was going on."

The Hawke's Bay attempted removal is just the tip of the iceberg, Ms Raukawa-Tait, she said.

"So, what we're saying to our Māori families now is record everything, take someone with you, and do not take this lying down.

"I think we have to push back on this department absolutely in every way possible."