A mosque shooting victim is worried his wife and four children may be forced to return to India because they haven't yet been granted residency.

Mohammad Sahadat was in New Zealand on a working visa when he was badly injured at the Linwood mosque on March 15.

He became eligible for permanent residency as part of the Christchurch Response Visa, brought in by the government to help victims but when his visa arrived a month ago, it did not include the names of his family who moved here to be with him soon after the shootings.

Visitors to Mr Sahadat's home are always told to come with an empty stomach.

The former chef and his wife are known for their hospitality and insist on serving up large helpings of food from their native India.

Speaking through a translator, Mr Sahadat said the welcome had so far not been reciprocated by Immigration New Zealand.

"He was hurt that his wife and kids didn't get it, especially when some other families... who did receive it for the very same circumstances and clearly his family didn't get it."

Mr Sahadat's wife and four children, who joined him shortly after the shootings, were currently here on visitor and student visas.

When he applied for permanent residency he included their names, on the understanding they too would be eligible as part of the Christchurch Response Visa.

"The invitation letter after he submitted the expression of interest, suggested to him at the time that obviously all of them who applied would get it. So that's why he was surprised and shocked and disappointed when he only got his [visa] and not his family."

The criteria for the Christchurch Response Visa is that immediate family members must have been living in New Zealand on 15 March.

Because they weren't, Mr Sadahat said they were having to jump through numerous hoops, including providing phone records to prove he had been in regular touch with them since he moved to Christchurch to work almost a year ago.

This came as he grappled with the after effects of the mosque attack in a foreign country. 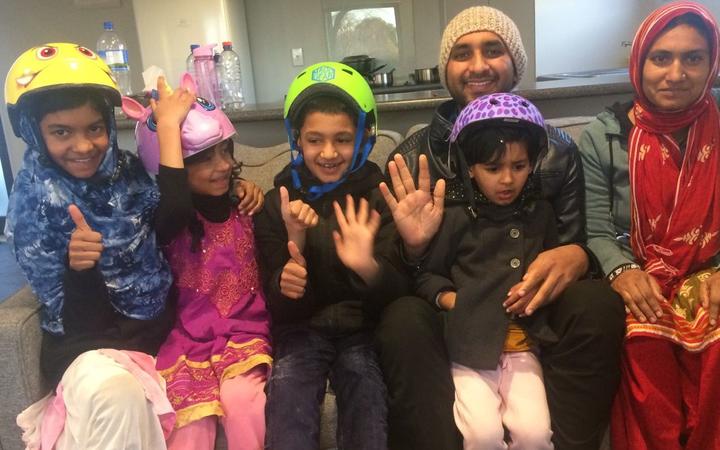 Mr Sahadat - who may still have to go back for a fourth round of surgery on his shoulder that was badly damaged by a bullet and was still struggling psychologically - said having his family here had been vital for his recovery.

They now faced an anxious wait to see if they could remain here with him and had no idea how long it would take for a decision to be made.

Deborah Lemon, who had been advocating for Mr Sahadat and his family, said it was a lot harder for them to access healthcare for example, when they didn't have permanent residency.

With Mr Sahadat's ability to return to work still up in the air, the family continued to rely on temporary accommodation being made available by MSD.

This runs out by the end of this year, when they hoped to get in to a Housing New Zealand home.

But Ms Lemon said this too could be difficult without residency.

"Because they have to be here as a resident for two years, it means that they're not eligible for social housing. We're hoping that maybe that might be re-looked at. Because we've had timelines be changed for getting payments and helping them with work and income payments. So hopefully parliament or government might have a look at that at a later stage."

Life had not been easy for Mr Sahadat and his family since 15 March, including two occasions when they were subject to racist taunts and threats of violence.

Since then though, things had started looking up a little bit with numerous offers of money and help coming in from those who heard the story, including a new washing machine so his wife no longer had to wash their clothes by hand.

Mr Sahadat was grateful for the support and still hopeful Immigration New Zealand would show the same generosity to his family.

Immigration New Zealand said it was continuing to work with the family on applying for residency under other visa categories.