Police make arrests after day of climate protests in Wellington

At least three people have so far been arrested during prolonged climate change protests in Wellington today.

Wellington climate protesters kicked off a day of global action today, shutting down one street and an ANZ bank branch in Wellington.

Extinction Rebellion protesters gathered outside the Ministry of Business, Innovation, and Employment (MBIE) early this morning, preventing access into the building for its employees.

They then marched throughout the central business district (CBD), stopping by the train station, and Parliament, before entering the ANZ on Lambton Quay.

About 500 people gathered at the beginning, with a multitude of flags, banners, and placards on display.

The disruption caused MBIE to send out an email to its employees, telling them to avoid the area and work from home.

The ANZ branch was also closed, following protesters staging a "die-in". Six protesters, including a 15-year-old teenage boy, superglued themselves to a glass door in the building, and stayed there after the office was closed.

Pink vehicles, loudspeakers, and street performance art - it was a protest that had a unique atmosphere with carnival-like colours and dancing.

Every speech was met with loud cheers and applause, and when the protesters who superglued their hands to the ANZ building returned, they were given a huge reception, and referred to as 'heroes'.

For those on their commute into work this morning, it seemed to be a bit strange.

Some, like Roger Brooking, were fully behind the climate protesters.

"I'm coming down to support what they're doing, because we're facing a really serious environmental crisis, and people don't seem to realise how serious it is," he said.

"So I think the more support they get the better."

"People are entitled to protest, I think it's pretty emotional to be honest. Good on them, but what are they really going to achieve?"

At MBIE, seven people glued themselves to the entrance of the building just after 7am. While some employees managed to sneak in the backdoor, when activists grew wise to the alternative entrance, they quickly moved to stop more employees going in. 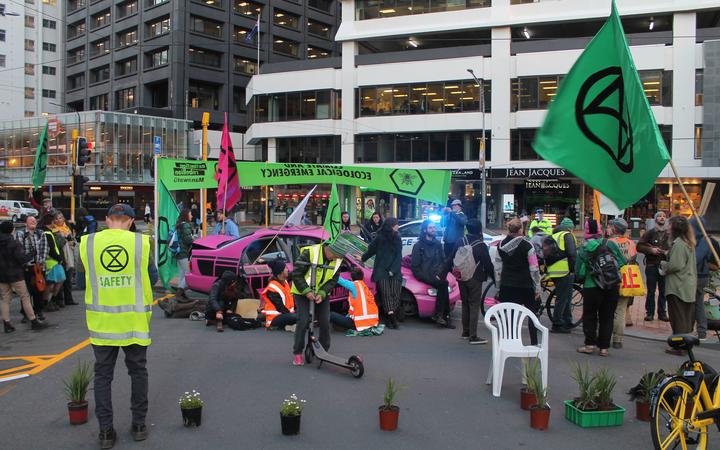 To prevent being physically removed by police, protesters attached themselves to two pink vehicles at either end of Stout Street.

Melanie Vautier linked herself to one other person through the window of a wheel-less car.

She said the action today was aimed at getting governments to change their mindset when it came to climate policies.

"The first one is: tell the truth, declare a climate and ecological emergency, and be real about the seriousness of the situation.

"The second one is to be carbon neutral by 2025, so that would include OMV withdrawing those permits so they can't go drilling offshore-onshore oil.

"And the third one was to set up a citizen's assembly, so we can go beyond politics."

It was around half an hour into the protest, when the steps of the ministry were commandeered.

The activists said they deliberately chose MBIE, because it was encouraging and enabling the exploitation of oil, gas and minerals.

In response, an MBIE spokesperson said they were "committed to ensuring New Zealand's abundant and diverse energy resources meet the country's energy needs that support our way of life, the economy and the environment, as we transition to a net-zero emissions economy."

"A future where life thrives"

Jeremy Logan is one of those who attached himself to the MBIE building, providing a human barrier to the entrance.

"I've never done anything like this before," he said.

"This is new to me, we're doing it because we're really concerned - you know as ordinary citizens, we're really really worried about the inaction of government."

As things began to settle down on Stout Street, the group's media manager, Simon Oosterman, took to the stage and addressed the gathering. 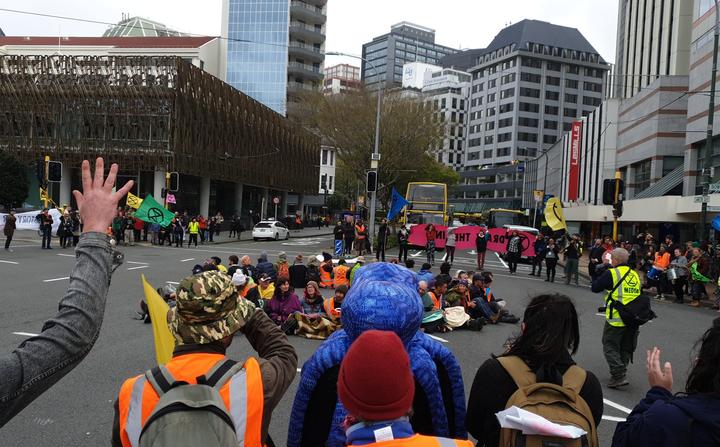 "We want a future where life thrives," he said.

"I want my kids to grow up and enjoy the beauty of the world like I did. I want them to have the same opportunities as I did.

"But business as usual is pushing us towards mass extinction."

In the afternoon, protesters headed to an ANZ bank branch on Lambton Quay. Once that branch decided to shut up shop for the day, protesters went to move up to the Majestic Centres on Willis Street.

They were targetting OMV - an oil and natural gas company. However, they were unable to get into the building, as the lift up to the offices, required a security pass. There were also reports that OMV employees had already gone home, anticipating protest action.

After protesters returned to Stout Street via the ANZ bank again, they proceeded to head towards Parliament.

They then stopped in the middle of Bowen Street and Lambton Quay where they formed a circle, with other protesters blocking off the roads.

Extinction Rebellion defines themselves as an international movement, that uses non-violent civil disobediance in an attempt to stop mass human extinction.

They started in London, where they shut down many roads in the centre for days at a time.

This protest in Wellington is just the beginning of a wave of climate action across 60 cities globally. Some are expected to go on for a couple of weeks, although here in New Zealand, it's expected to just be for the day. 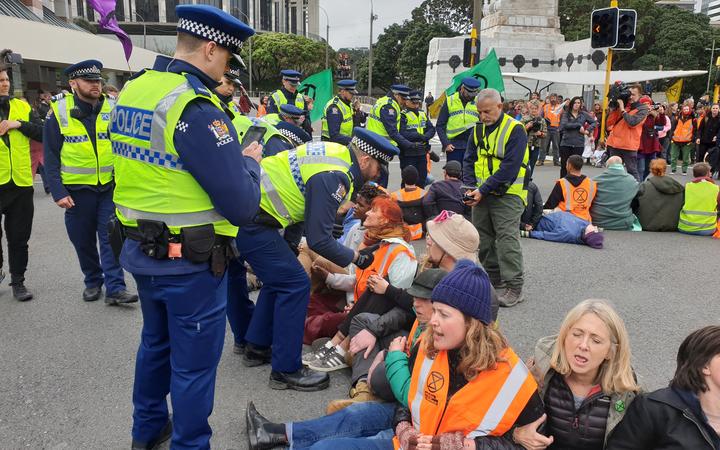 A significant part of being involved with the group is the doctrine of non-violent civil disobedience. Getting arrested, while not a priority, is one of the necessary consequences, protesters said.

"If I got arrested, it wouldn't be a problem," activist Cat Hendra said. "But I'm choosing not to put myself all the way there, I'm choosing just to be in support at the moment."

Patch Oliver said: "No other cause in the world, like trans rights, new iPhones, anything you would want in the world, can exist without the planet to sustain them.

"So if anything was worth arrest, then yeah, this would obviously be it."

At least three people have been arrested so far, although further disruption is expected into the evening.

The protest today in Wellington is just the first of about 60 "rebellions" in cities across the world.

Action is anticipated to go on for two weeks in some places, though here in New Zealand, it's just for the day.