The protesters were greeted with a rousing haka from about 50 supporters, as they made their way down New North Rd, with tino rangatiratanga flags whipping in the strong winds.

Ms Ardern has repeatedly declined to visit the whenua at Ihumātao, but that hasn't deterred Save Our Unique Landscape - or SOUL - representatives from starting an online petition to get her there, which received over 26,000 signatures.

With support behind them the 80 marchers set out from Ihumātao this morning, making five stops along the way to pick up more people, with the hīkoi growing to 300 by the end.

Walking alongside him was postgraduate Māori studies student Rahiri Makune who said she had learned about events like Takaparawhau (Bastion Point) and Ihumātao and it was their time to stand up.

Protesters kept their spirits up by singing waiata like Nga Iwi E, and E Papa and iconic Ihumātao chant Ka whawhai tonu mātou as they were at times caught in heavy rain.

A 73-year-old kaumātua from Ihumātao walked almost the entire way, with two people on either side of him supporting him at times.

The worst weather came just after 12pm as marchers made their way to Puketapapa, or Mount Albert for lunch, with their rain jackets, umbrellas and gumboots no match for the rain, which seemed to come from every direction in bucket loads.

But with kai in their stomachs, and the skies clear once more, the marchers continued on towards St Luke's, until they finally turned onto New North Rd, where a crowd of over 50 people were waiting outside Jacinda Ardern's electorate office to meet them.

For the final leg of the journey down New North Rd, a group of tamariki who whakapapa to Ihumātao led the way holding the letter for the prime minister in a giant envelope.

One young kotiro said she was trying to secure the land for her children and mokopuna so they could visit the whenua in the future.

While Ms Ardern was not there to receive the petition, three of her staff members came out of their office, which was blocked by police, to receive the letter.

They were silent as the letter was handed over, and mana whenua representative Eru Rakena thanked them for coming out to meet them, and reiterated the protesters dedication to saving their land.

"We battled high winds and we battled pouring rain, engari, kei konei tonu mātou [but we are still here] that can only be evidence that we are very serious and very passionate about our cause." 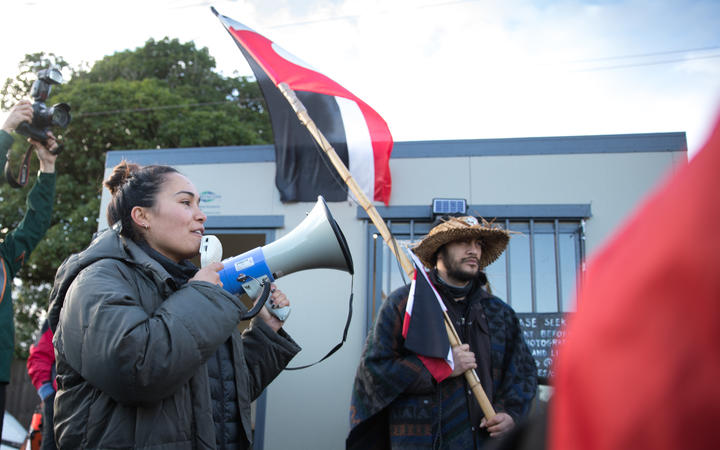 "I don't accept her justification for why she won't come and visit. At some stage the Crown has to take responsibility for the land confiscation in 1863 and again, in 2016. They're robbing the public of a special cultural heritage site. She's also the Minister for Culture and Heritage - she has a responsibility to heed the call of her people."

Tomorrow marks a month on from when SOUL, led by Pania and some of her cousins refused to allow construction vehicles in.

Building work continues to be halted until a way forward can be found and the Kingiitanga is currently facilitating negotiations between the opposing mana whenua groups.