An online video showing a group of white men dressed as Māori and pretending to be descendants of a Waikato-Tainui sub-tribe has outraged members of the Māori community. 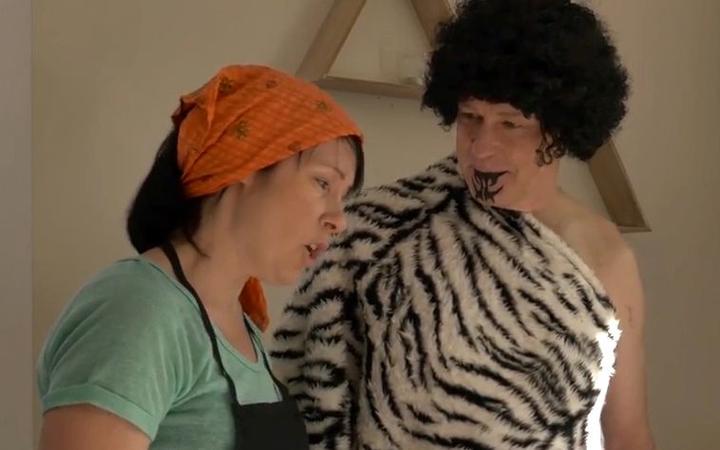 A screenshot from the video. Photo: Supplied / Screenshot

The eight minute clip - which was made to look like it was filmed at Te Whare Rūnanga at the Waitangi Treaty Grounds - was posted to Youtube last year by a church group.

At the beginning of the film a group of male actors - wearing fake wigs and moko kauae - are scouring the bush when they come across a young girl sleeping.

It's the story of Tārore, a 12-year-old girl from Ngāti Hauā, who attended a missionary school and was killed on her sleeping mat in 1836.

The backdrop for most of the video is of Te Whare Rūnanga or the meeting house found at the top of the Waitangi treaty grounds.

When the rūnanga's cultural advisor, Mori Rapana, saw the video for the first time last night he was stunned.

"Shocked, disgusted, angered that people could present such a misinterpretation, a culturally insensitive video portraying tūpuna that they have absolutely no affiliation, no connection to.

"It was certainly a jaw dropping moment. I have seen many videos of that type of nature before but I have certainly not seen one that bad, it was absolutely terrible."

Mr Rapana said the footage of the rūnanga was computer-generated and not filmed on the grounds itself.

And he said the film was not sanctioned by anyone from the Waitangi National Trust.

"We had nothing to do with it, we certainly would not have approved any filming of this nature to take place. We get requests quite regularly, from directors, producers, photographers asking for permission to use aspects of the Treaty grounds and we certainly did not give approval or sanction any of the use of the Whare Rūnanga and the Treaty grounds in this."

RNZ has today tracked down the maker of the video, Network Engineer Hudson Millar, who said it was a home-made church project.

He said Tārore was an influential figure in the Christianity movement in New Zealand, and he wanted to bring her story to life.

Mr Millar did not seek the permission of Ngāti Hauā to tell the story of Tārore, or from the Waitangi National Trust to use the images of the whare rūnanga.

But he said he included a disclaimer warning people that the content in the video was not necessarily an accurate re-telling of historical events.

"That's why I did write that disqualifier at the front. I wanted them to understand that it was only meant to tell the story, the symbols in it and everything in it weren't meant to represent anybody or anything in particular."

Since speaking with RNZ Mr Hudson has taken the video down.

But Treaty of Waitangi lecturer Hemopereki Simon said his actions illustrated an on-going ignorance in New Zealand that needed to be addressed.

"It seems to be that the representation of missionary schools is that they were highly positive and that they were teaching the word of Christ. But this flies in the face of what researchers and people in this educational space have been trying to say about what has happened in history and the negative effects.

"Those missionary schools are the forerunner of the native schools system which did some really detrimental damage to te ao Māori and in particular te reo.

"It's just another confirmation of just how ignorant this country is in terms of our history, I am not saying you can't tell the story, by all means, but don't get a Pākehā man to put on a moko kauae, a female moko, there's a way of doing this with cultural sensitivity that could be highly appreciated."

RNZ has contacted Ngāti Hauā for comment, but they are yet to respond.