Christchurch City Council has unanimously agreed to reconsider how it manages traffic through the city's northern suburbs, before the Christchurch Northern Corridor opens.

It comes after pressure from a group of residents, who say a proposed Downstream Effects Management Plan (DEMP), would have put "cars before communities".

As councillors arrived in their offices this morning, they encountered a mock pedestrian crossing blocking their access to the stairs and signs reading "dump the DEMP", held by the Northern Arteral Extension and Cranford Street Upgrade group, and environmental lobby group Extinction Rebellion.

The motorway is expected to increase traffic volume in the city's northern suburbs by 30 percent, and the draft DEMP includes provisions like lower speed zones and upgraded intersections, to make sure those suburbs are still safe and accessible for locals.

However, Emma Twaddell said she and other residents had spent weeks talking to councillors about their concerns with the "car-centric" DEMP, which didn't include any public transport planning or enough provisions for local cyclists, among other faults.

"We want a plan that moves people not cars. We think that the DEMP is all based around mitigating cars [traffic]. And we don't think the focus is right," she said.

Axel Wilke, from ViaStrada Transport Planning, worked with the group to design an alternate plan to the DEMP and put it before two community boards. 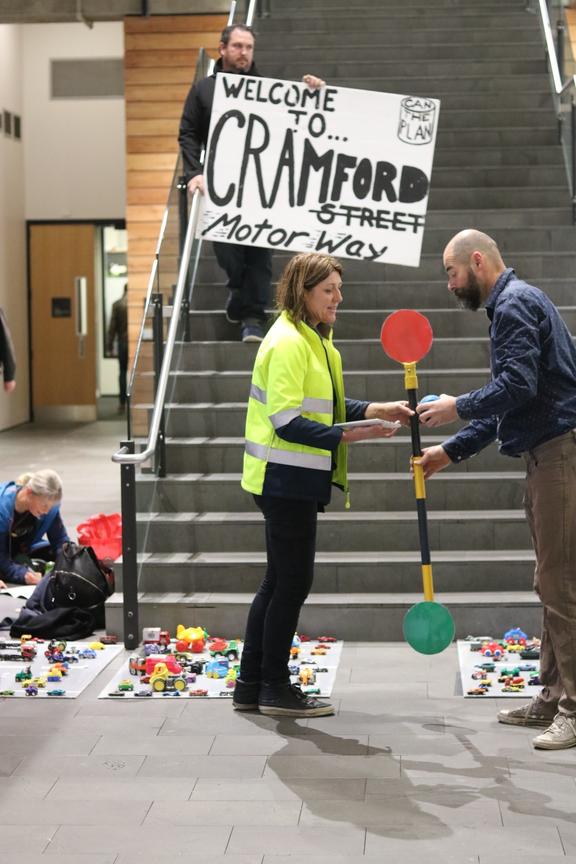 As councillors arrived in their offices this morning, they encountered a mock pedestrian crossing blocking their access to the stairs in protest over DEMP plans. Photo: RNZ / Katie Todd

He felt that key stakeholders involved in making the DEMP had struggled to see the benefit public transport could have - and that wasn't something that could be changed retrospectively.

When the motorway is opened, he said, everything needed to be in place to make it an instant success "and to not have to make major changes later on."

"The alternative plan is about enabling people to move rather than cars to move. So the approach is 'let's get public transport going really well - bus priority lanes, frequent buses - so that during the peaks you can still get into central Christchurch faster than driving'," he said.

In a resolution prepared by two community boards last month and voted on by the council this afternoon, the first projects proposed by the DEMP will go ahead, including intersection and street upgrades and environmental monitoring.

The council are not fully endorsing the DEMP however, and will also be looking into a park and ride system, peak-time bus lanes on main streets, and pricing mechanisms to manage future traffic demand.

Councillor Mike Davidson said the needs of the community should be put before those of people wanting to get into and out of Christchurch more quickly.

"We cannot build roads that create poor outcomes for the community. We have a community that wants a walkable and bikeable environment. A people-friendly community - not an environment that is dominated by cars with their emissions and noise," he said. 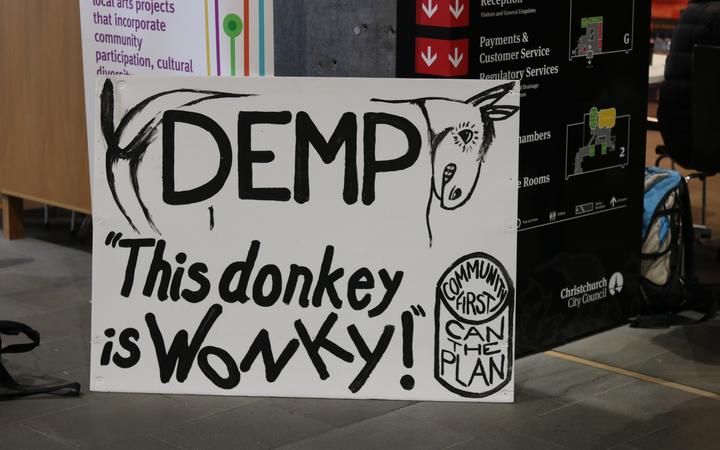 Councillor Andrew Turner said the original plan was a broad proposal to move more cars more quickly through the northern suburbs of Christchurch.

"But what we're seeing reflected in the community view is that ... we need to start looking at things differently. A vision where we see more people on public transport, more people cycling."

The resolution's passage today came with a warning from councillor Aaron Keown, who said there was still work to do if public transport was to be prioritised, such as initiatives to get people out of their own cars.

"Unless the work we do around public transport is radical, people won't catch the bus," he said.

Northern Arteral Extension and Cranford Street Upgrade group spokesperson Mike Wilson was also hoping the council would not be afraid to push back the motorway's scheduled mid-2020 opening until all public transport projects had been completed.

"Finally, the council and even the planners realise that Cranford Street and the surrounding areas can't deal with the amount of traffic that they were going to push on the streets whilst also having a safe community for people to live in and access," he said.

"It's a real tight timeframe to actually get everything put in place but they do have the option of not opening it."

The council is vowing to continue working closely with residents as they put together the new plans.

That is a win for protesters like Mike Wilson, who said the council had put its people first and was dealing with other consequences later.