Teachers vow to strike again if govt doesn't up its offer

They marched, they sang, and they shut down most of the country's 2400 state and integrated schools, but it remains to be seen if today's historic joint strike by primary, secondary and area school teachers has moved the government.

The joint action by nearly 50,000 members of the Educational Institute and the Post Primary Teachers Association was an attempt to persuade the government to expand the$1.2 billion envelope it has imposed on its offers to teachers.

But speaking to striking teachers in Wellington, the Education Minister, Chris Hipkins, stuck to the line he has consistently given - that the government is doing a lot to improve schools but it can't do everything at once.

That did not go down well with the thousands of teachers gathered in front of the Beehive and Mr Hipkins retreated from the podium on Parliament's forecourt to boos and chants of "not enough".

The strike was the first by secondary teachers, but the third by primary teachers and principals who have been in collective agreement negotiations with the Education Ministry for more than 12 months.

Joining the strike in Wellington's Civic Square, the deputy principal of Houghton Valley School, Monica Mercury, said it was disappointing that primary teachers had to strike for a third time.

"We have to stay resolute because we deserve more," she said.

"The fact that we're unified, we have kotahitanga, it's amazing," she said. 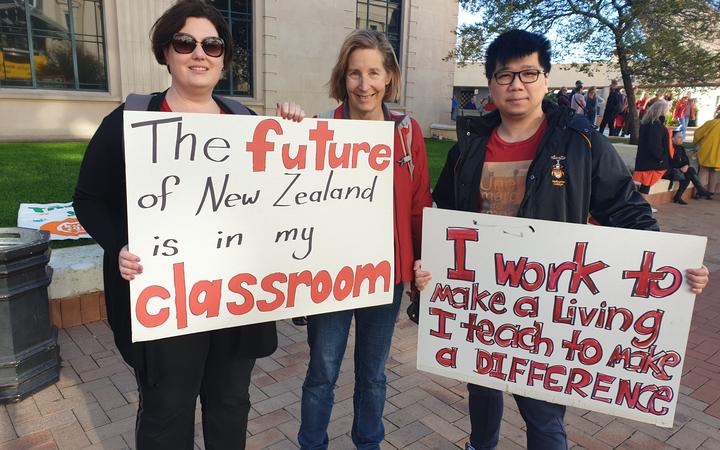 Ms Jutson said too many teachers were unwell and on stress leave because of the demands of the job.

"It's about the workload and the inability to balance work and having a life," she said.

Maths teacher, Beverley Holder, said both she and her 26-year-old daughter had maths degrees and loved the subject, but her daughter was already earning more than she was.

"She hasn't got 30 years of work experience and she gets paid more, so the market isn't managing this well," she said.

Mr Wang said the upper limit of teachers' pay was not enough to keep people in the profession in the long term.

"If we look at the pay scale right now, the maximum we would get as a teacher is $78,000 for teachers who have 20, 30, 40 years of experience. The starting pay is quite nice, it's just the future that I'm not very certain if I would stay in this job for long," he said.

In Hamilton, several thousand teachers marched along Victoria Street in the centre of the city to Garden Place where they held a rally in the sun.

Lorna Kennedy has been teaching at Knighton Normal School since 2007.

She said teachers are fighting on a number of fronts.

"We are fighting for the children and our society in general."

She said there were many things that made the job of a teacher tough.

"It was tough when I started in 2007 but it's tougher now because of the social issues going on and how that's presented in the classroom, it's massive."

Rochelle Lingard is in her first year teaching at Te Totara Primary School but she has been a teacher for 20-years.

She said the work hours and paper work she had to do were taking a toll.

"The children we worked for and the energy and time we put in and that is important but we also value that we are important and without us then things fall apart."

"We are not being listened to and it is about time the government starts listening and this is only the beginning and there's still a long way to go." 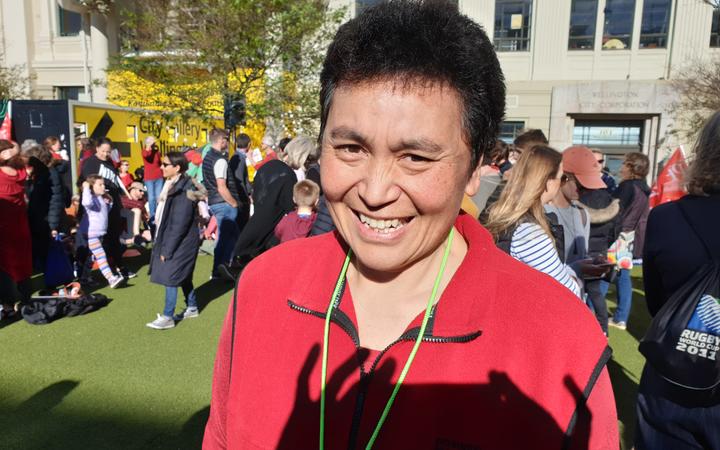 He has been in the profession for 20-years.

Mr Casey said teachers had put up with a lot and enough was enough.

"It's got harder, conditions are harder, expectations are higher and financially I am always struggling."

He said he was at the top of his pay scale.

"We have been patient for a long, long time and the Minister can say 'well that's all there is in the pot', the fact of the matter is that the pot just isn't big enough."

Mr Casey said a compromise was probably the way the stand off would end.

"It seems a case of who blinks first, well I'm sorry but when did our education become a game of chicken."

Eliza Thomson from Ngaruawahia High School said teachers were united and did not accept the government's stance.

"We are the ones teaching our children, the next generation, the next leaders, so the government needs to do something," she said.

Ms Thomson said students probably just think it is a great day off.

"I think high school kids will be enjoying it, let's be honest."

She said strike action plus more planned would definitely have an affect on children's learning.

"It will hit term three, those that are seniors, NCEA, it's going to affect them a lot preparing for exams."

The Post Primary Teachers Association has further industrial action, including a week of rolling one-day strikes, planned for June and the first week of July.

The Education Ministry has applied for facilitating bargaining with the Employment Relations Authority, but said that both unions had objected.