A New Plymouth teenager who loves all things kunekune has taken in two runaway sows picked by animal control after they were found wandering on a suburban street.

The council pound put the kunekune up in a specially created "Pig Palace" in January while it tried to locate their owners, before offering them up for adoption.

Now it has given 14-year-old George, who asked RNZ only to use his first name, the nod to be their new caregiver.

Already the proud owner of four kunekune, he said he immediately sprang into action when he found out the errant pigs could be looking for a new home.

"I went onto the New Plymouth District Council Facebook page and messaged them through that and they replied to me and said 'okay we'll let the pound know' and they had obviously kept me in mind because about three months later they emailed me back saying that the pigs were up for adoption and two days later I got them." 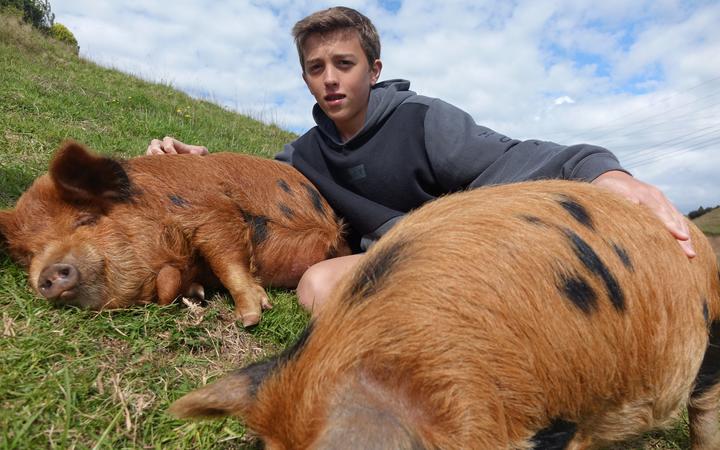 Not that the Francis Memorial College student had sought his parents' permission.

"I actually didn't tell anyone I'd emailed the pound. I just said 'dad I'm getting two new pigs'. I didn't really ask I guess."

"Yeah, we've got enough space for them and they are a lot of fun and they are really cute. You can interact with them like a dog." 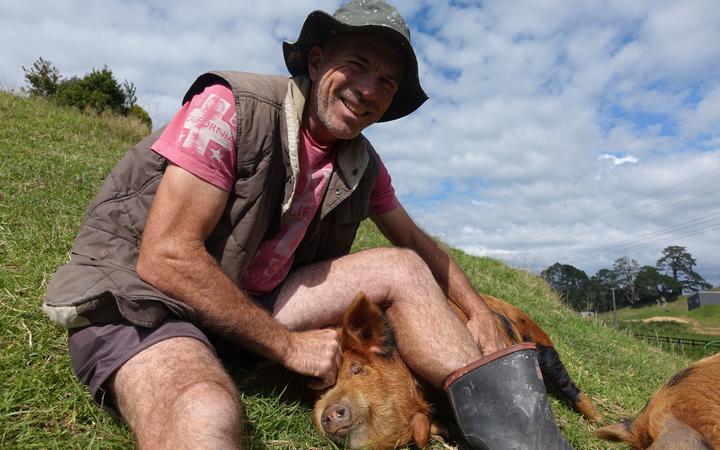 George named the newcomers - which are about five months old - Peggy and Sue, but have been keeping them separate from the other four kunekune - Cleo, Mabel, Wayne and Wilbur - which were brought to the family's Frankley Park lifestyle block about 18 months ago.

That was because the pair were on a special diet after having overindulged at the pound.

"I am feeding them mostly on grass and pig pellets once a day, sometimes twice a day if I'm feeling nice, but Peggy has already lost quite a bit of weight so it's Sue who needs to loosen up on the food," George says.

"They were a bit overweight, just a bit. They were probably spoilt when they were at the pound which is better than being underweight so I'm just taking them back to their ideal size and condition.

"I won't feed these guys scraps yet because that is what will make them really fat." 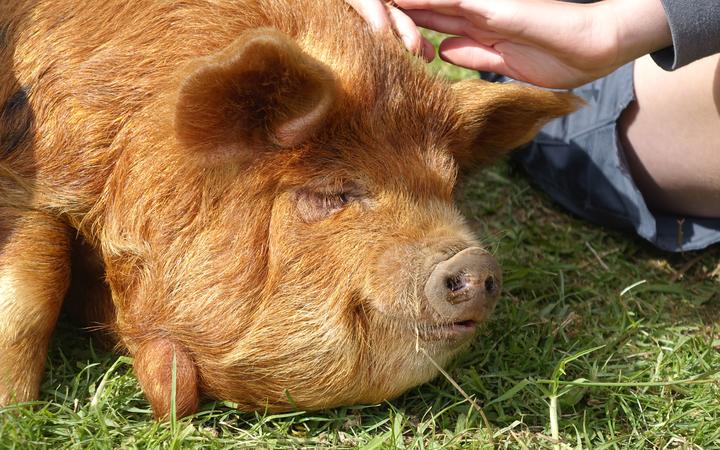 Peggy and Sue will be separated from the other pigs until they're back to an ideal weight. Photo: RNZ / Robin Martin

None of this comes cheap of course, but George has that covered too.

"So I have ... five different jobs because I do have to pay for all my pigs all by myself and none of this was here before. I had to set it all up with like the electric wire and stuff.

"So I do window cleaning, I charge electric scooters, I now work in a cattery, I do pet care and I mow people's lawns so I've got quite a few jobs - but I enjoy working, especially when there's money."

Ian said his son was always curious about kunekune, which stand about 60cm tall and can weigh between 60kg and 200kg.

"George has shown a lot of interest right from the start with the animals we brought on board and it was his idea right at the early stage to get kunekune pigs and we'd both dearly like to have them inside the house but we're yet to get there.

"We're trying to convince my other half and the rest of the family. She's really fine with them too as long as they don't come in the house. As long as they're out on the grass in the paddock no problems. We're trying to hatch up a little plan at the moment."

George, who aspires to a career in the agricultural sciences, reckoned it might be doable with a piglet.

"Say when I breed them and I have a little runt or something dad wants to keep a little piglet in the house and I want to too. Then keep it in there for about six months - 'cause kunekune are more intelligent than dogs, so you can toilet train them and teach them tricks like to sit and stuff and they're actually really intelligent."

One place you won't find any of George's kunekune is on a dinner plate.

"People say they are also good for meat as long as they are kept lean cause kunekune do put on fat a lot faster than other pigs even though they are smaller so if they are just fed on grass they'd actually taste pretty good.

"But not these ones. If I was going to do that I'd actually get meat pigs because these guys are just too friendly and cute."