Stroke victim forced to use public bathroom to shower

A West Auckland mother of seven is forced to use shower facilities at a local pool because her own bathroom is too unsafe for her.

Natasha Sadler uses a wheelchair and has limited use of the left side of her body after she suffered a massive stroke last April.

Adding to her current rehabilitation challenge is her daily battle to safely have a shower in her own home, which she rents privately.

Waitematā District Health Board (WDHB) has told her it could take up to a year for funding to come through for her bathroom to be modified so it's suitable for her to use.

Last year, the 45-year-old high school teacher suffered a stroke while she was teaching in Northland.

"My uncle and I were hosting a Māori Language Wānanga for our marae up north and mid-speech I sort of buckled over."

She's on a long road to recovery - she has limited use of her left arm and leg, but has made huge progress since last April, when doctors told her she may never walk again.

But adding to her current rehabilitation challenge is her daily trek to Henderson, to use the shower facilities, which she has been doing for the past three months.

The clawfoot bath, which is in her bathroom at the moment, tips when she sits on it and she had to be picked up by paramedics when it collapsed late last year.

Unable to have a shower in the comfort of her own home, the closest place is a 15-minute drive away at Westwave pool.

At the pool it's pure luck as to whether there will be a mobility park available nearby - or whether other people in the same position as Ms Sadler are already using the shower.

She knows at least five other people who use the facilities because their homes are also unsafe - if they get their timings wrong, they can be waiting up to two hours for everyone to have their turn. 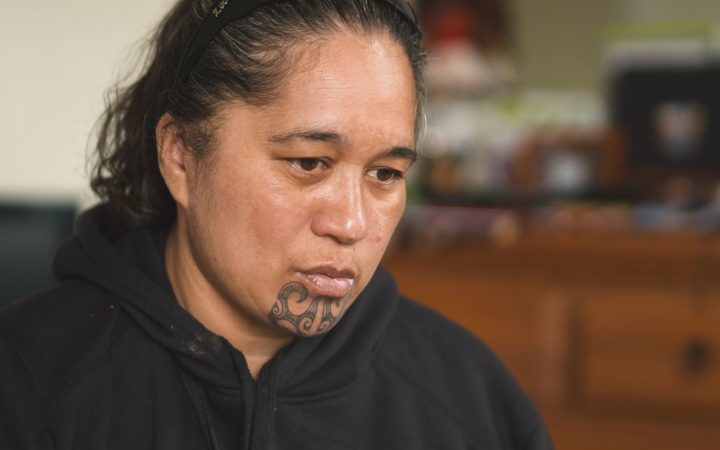 Natasha Sadler has limited use of the left side of her body after she suffered a massive stroke. Photo: RNZ/ Nick Monro

"I came home, referrals were done, but people didn't turn up, the OT couldn't come until the 8th of January."

She has been told by her occupational therapist that the wait for funding could be between nine months to a year.

"It's a human need. I'm not asking for a spa pool, or a flash Chevrolet car," Ms Sadler said.

"I could reclaim two hours of my life and it's human dignity as well."

Waitematā DHB in a statement said it understood the frustration and inconvenience of waiting for a home modification but said it was providing a high level of support to Ms Sadler.

The DHB said there have been no unnecessary delays involved with Ms Sadler's application, which was "progressing within the expected timeframe".

It also said daily support had been arranged by Taikura Trust to assist her in maintaining personal hygiene within her own home in the interim.

The DHB has recently completed its assessment of Natasha's needs and trials of equipment, some of which it said had proven to be unsuitable given the freestanding bath.

They then submitted a request for a funded bathroom modification to the Ministry of Health Equipment and Modification Services (EMS) on 4 March, 2019.

The DHB said the entire process could take between nine and 12 months from assessment of need and establishing EMS funding to completion.

The Ministry of Health in a statement said it does not comment on individual cases but acknowledged home modifications may take some time to be completed.

The ministry said appropriate support was usually provided while these modifications were planned and carried out.

"The time to put these home modifications in place is usually 6-8 months, once the assessment for the modification has been received."

The ministry said modifications required design, planning, coordination, agreement from the property owner, an income and an asset test may also be required, the letting of a tender and possibly building consent.

It said that if the process goes as expected then the modifications could be put in place in about six months.