Hugh Jackman surprises AUT students - then sings with them

A choir group from AUT walked on stage with knowing smiles, clapping their hands and moving to the music that has set them free to express their true selves. 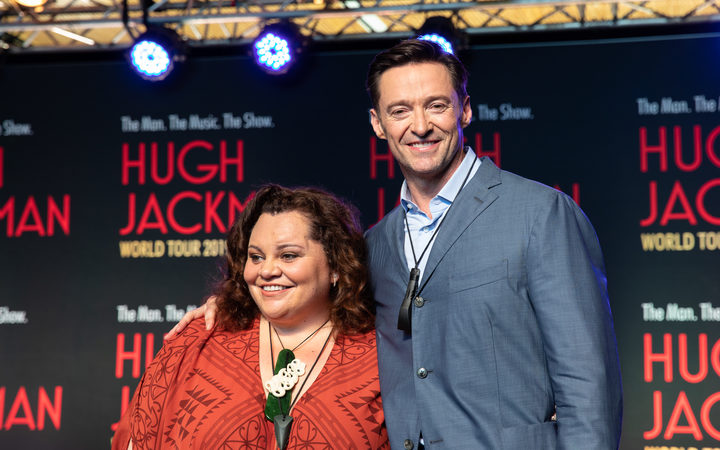 They were bright and energetic, but there was just a hint of the emotional exhaustion after being caught off guard by the "Greatest Showman" himself.

The Oceania Voices choir shot to fame last year when their rendition of 'This Is Me' from The Greatest Showman went viral, and caught the attention of Hugh Jackman.

Today he was merely fulfilling a promise to come to New Zealand and sing with them in the same room.

He walked in singing 'A Million Dreams', and welcomed on stage Keala Settle, the Hawai'ian-born, part-Māori actress and singer.

Sharing the stage with her, some of them could dream more easily of seeing their own future in her meteoric rise to success.

But the emotional high wasn't reserved to the students - both Settle and Jackman had to wipe away tears several times.

"We've all traveled long journeys to get here, I've been to many many places, today is one of the most profound and I will never forget."

Choir member Charm Lavea said she was blown away by Jackman's grace and charm, as they rehearsed 'A Million Dreams'.

"There was so much pressure but at the same time Hugh was reminding us that it was our own song, we sing it as our own," she said.

"And there was a great pride in singing it, more meaning to it."

Representing the fastest growing population in the country, the students are from the many low decile schools dotted around South Auckland, from families struggling to shine against a backdrop of high youth suicide rates and low incomes.

Choir member Nathan Ashin said young Pasifika students were set to make a big impression on the country as the years went by, and the AUT programme was helping them to find their place and their voice.

"Our success resonates through the whole country."

But it was Jackman who insisted he had learnt the most from today.

"I walked in here this morning at about 8.45, the guys were singing, warming up, and I just started to cry," he said.

The university leaders say the sad reality is that if nothing changes with current trends and forecasts, only two in 10 of the young students in Manukau will get to university.

AUT's UniPrep programme is trying to turn those statistics around, and if the optimism of the students is anything to go by, they can't fail.

Composer Tuilagi Igelese Ete flew from Fiji last night to conduct the choir - he arranged the musical scores for Moana and his own production is set to hit Broadway and Hollywood.

He visits often to work with the choir and said the songs they sing, such as those from The Greatest Showman, reinforce the message that they can be themselves and get ahead.

"A lot of these students have come through struggles as well and I think... the songs they are singing, there's some powerful meanings behind it," he said.

Jackman flew in last night for the launch before heading home to Australia. His Australian tour starts in August and he will return to Aotearoa for two shows with a live orchestra in Auckland's Spark Arena on 6 September and 7 September.