Paramedics around the country say they are stressed and at breaking point, as their pay negotiations stall.

St John Ambulance, which operates everywhere apart from Wairarapa and Wellington, said it told the health minister that the current 74 percent government funding level was unsustainable.

Its latest offer doesn't include night and weekend pay rates, leaving paramedics as the only health sector workers not given 'sweetners' for those shifts.

Some are paid only $19 a hour, saying the government and St John don't seem to recognise the value of their service.

ICPs receive around $80,000 a year but that's the ceiling for the rest of their careers - and none of them are paid penalty rates for overtime shifts.

"We are so close to crisis," said Andrew Fergusson, an intensive care paramedic based in Northland.

"The ambulance service is close to breaking point. We are barely keeping our head above water."

In a desperate turn, the paramedics have taken to scrawling messages on their ambulances with washable chalk and pens. The coloured graffiti has captured the public's attention, with messages like Shift Our Pay and Lowest Paid in the Developed World. 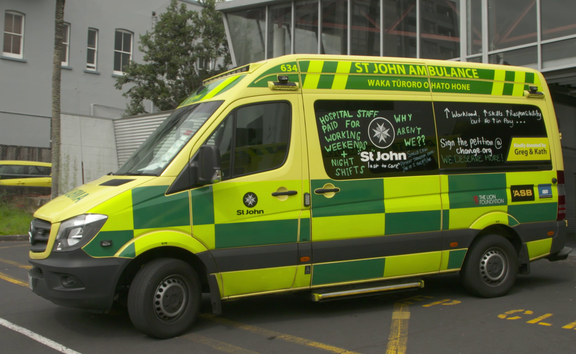 St John Ambulance said it was concerned about some people using permanent ink and damaging the vehicles, and said it could distress patients and upset families who are donors.

"I've had no negative reaction in the community," Mr Fergusson said.

"I've had people that have been hooting their horns, giving us the thumbs up as they drive past. I've had people give notes to ambulance staff saying they think we are doing an amazing job."

Anthony Ivan, an intensive care paramedic from Pukekohe, said he was sick of being compared to a nurse.

He said the profession had changed, but the pay was 20 years out of date.

"Nowadays as an intensive care paramedic on the road, I can put someone into an induced coma, intubate them - put a breathing tube down their throat and breathe for them, cut their chest open, if we need to at a big trauma," he said.

"Now that's well beyond the scope of a nurse, and indeed many doctors in many cases."

Mr Ivan said he struggled to make ends meet with his income, and wondered how his lower-ranked colleagues survived.

"Just to afford fuel and rent in Auckland, for golly's sake," he said.

"When I look at my colleagues who are further down the ladder, it is more, tremendously more difficult for them, and that is depressing to say the least."

Some of those colleagues are emergency medical technicians, who are paid about $50,000 a year. They say that salarly would immediately double if they went overseas.

Mr Fergusson said the lack of penalty rates hurt even more when other professions were getting more recognition.

"After their latest win, the cleaners will be paid more during the weekends than our most qualified ambulance staff."

He said he had bigger expectations of the Labour-led government.

"We have a current health minister whose whole government is based on wellness," he said.

"Our staff and the staff of emergency services are at higher risks of PTSD, mental health issues, we kind of consistently get the message from them that if you don't like it, go find somewhere else to work."

Lori Gommans, an emergency medical technician based in Hamilton, said she might not be for long if she can't get paid for the high-risk work she undertakes - especially when she's the only person in an ambulance attending a remote call-out.

"Places like Ngaruawahia and Huntly, they are single-crewed at night still," she said.

She said that could happen every other day, and she has had to escape from properties and call police.

Where there are double-crews, the emergency medical assistant is only paid $19.10 an hour - even when that assistant's shift is covered by a highly skilled paramedic.

St John Ambulance declined to be interviewed but in a statement said it was negotiating in good faith with workers and the industrial action was also impacting St John financially.

St John director of people and capability, Sue Steen, said in partnership with Wellington Free Ambulance, St John had submitted a request for a significant increase in funding levels.

She said that funding bid included a provision to ensure that paramedic's pay matched their skill level.