An Auckland man who was catapulted 10m off a Lime e-scooter when it stopped suddenly wants them taken off the roads immediately.

Our reporter Nita Blake-Persen and cameraman Nick Monro went to visit Liam at his home, where he explained how the accident happened as he cradled his son Harvey.

Liam Thompson, 27, was on his way home from a nearby supermarket after picking up some food for his son's first birthday on Friday evening when he hopped on a Lime to head down the hill.

"I was on the scooter for about two minutes, I was riding down the path, all of a sudden the wheel just locked up and I got thrown over the front and landed straight on my jaw," he said. 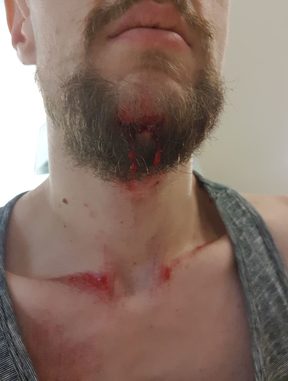 Liam Thompson, 27, was left him with a broken jaw, scrapes across his chest and wrists after an accident on a Lime e-scooter he was riding. Photo: Supplied

"I sat up, spat out a little blood and some teeth and walked on home."

The accident has left him with a broken jaw, scrapes across his chest and wrists, and he is facing up to six weeks on a liquid diet while he recovers.

Mr Thompson gave the $5.50 ride a one-star rating and left it on the footpath.

When he passed by five minutes later on his way to the hospital he noticed it was gone again -  presumably off on another ride.

"I wouldn't have a clue who is out there riding it around and I hope that no-one has another accident because of it," he said.

Mr Thompson said he believed Lime scooter riders were playing Russian Roulette as there was no way of knowing which ones would seize up until it was too late.

"I would've taken full responsibility if I was playing around or if I was trying to do a jump or something silly... but because I was trying to be safe, I was on the footpath, I was going slow, and it happened because of a malfunction, how could I possibly be at fault...?"

A braking issue with Lime scooters in Switzerland prompted the company to pull its fleet there - Mr Thompson said the same thing needed to happen here until Lime could guarantee users' safety.

He also wanted Auckland Council to look more closely at the scooters. 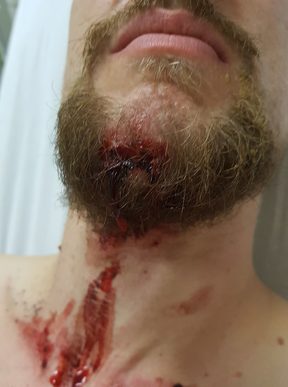 Liam Thompson, 27, was left him with a broken jaw, scrapes across his chest and wrists after an accident on a Lime e-scooter he was riding. Photo: Supplied

"They should go through each and every one of them if need be - anyone can jump on and anyone can hurt themselves."

Mr Thompson said he had not received any correspondence from Lime beyond an acknowledgement of his initial complaint.

On Friday, Lime confirmed in a statement that a braking glitch was affecting its fleet.

"The issue is still under investigation, user safety is our first priority and the affected scooters have been removed from circulation," Lime said.

"We are in the process of rolling out early detection and additional preventative measures for our global fleet. If a rider encounters a similar issue they are to report the scooter on the app and the issue will be investigated."

"Our thoughts are with Mr. Thompson following this tragic incident and we wish him a quick recovery. We are reaching out to offer our support and remain in close collaboration with local authorities and policymakers."