Famous mermaid pools to be closed off to the public

Aperahama Edwards from Te Whānau ā Rangiwhakaahu hapū represents Matapouri on the Ngātiwai Trust Board and he said rubbish, including human excrement and sanitary waste, is being left in the bush and in sacred places.

His hapū is planning to put a rāhui over Te Wai o te Taniwha, or the Mermaid Pools at Matapouri, just north of Whangārei.

He said visitor numbers have been taking a toll for years but the recent influx over the summer has prompted his hapū to act.

"The water isn't as clear as what it once was, it's very murky, so it's the human waste really, like I say there's no toilets there so you can smell the urine there, the mimi."

It's not just a matter of damage to the environment, there are concerns around people's safety, with parts of the track very dangerous with ropes to assist climbers to get across, there is also the danger of being hit by waves on the sharp rocks and people being swept out to sea.

Mr Edwards said that the maunga between the beach and the pools is a sacred place. 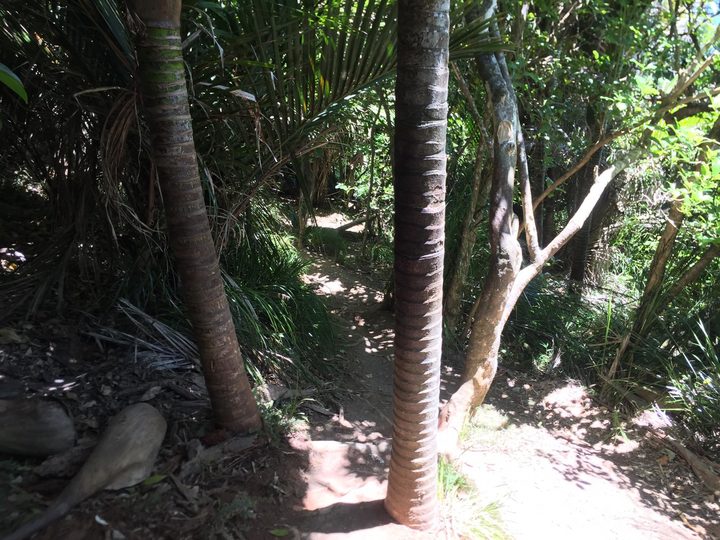 Rubbish has been found in the bush near the Mermaid Pools. Photo: Supplied / Marco Pilia

Julian is a Spanish tourist doing the Te Araroa Trail who was at Matapouri today. He said he visited the pools and trekked over the hill.

Marco is an Italian working and travelling in New Zealand and said the volume of visitors did have an effect on the water.

"At the beginning when we arrived the water was very clear ... when we left around midday or 1pm there were a lot of people and so the water in the big pool looks a little bit less clear than at the beginning, that's for sure."

"All the friends that I have, all the people that I met here they are tourists and most of them they are 100 percent respectful of this place, maybe more the locals are a little bit less careful about the place itself."

Visitor numbers have been taking a toll on the Mermaid Pools for years, Aperahama Edwards said. Photo: Supplied / Marco Pilia

Whangārei mayor Sheryl Mai said she had not yet met with the council but personally supports the rāhui.

She said she had seen before and after photographs and is worried.

"I certainly share the concerns for any aspect of the environment that's been highlighted to us that humans are creating havoc in our gorgeous environment, so you know we have to take heed of this warning."

Ms Mai said the area has become a victim of its own beauty and success.

"The profile of the Mermaid Pools became elevated to an international level, as one of the top things in New Zealand to do, and of course who can resist when you see photographs of it and it's so beautiful and of course that put the pressure on."

Ms Mai said the land belongs to the Department of Conservation, which said in a statement that it has never managed or promoted the walk, and discourages people from visiting the Mermaid Pools.

However, it has signs at the start of the walk warning of the dangers, and information on its website describing efforts in 2012 to fix the path to what it called the "magnificent" Mermaid Pools, so locals and tourists alike can "once again enjoy this delightful spot."

DOC says it is meeting with local hapū about a potential rāhui and would be supportive of it.

Mr Edwards said he hopes the damage can be fixed but it will mean a ban on visitors for some time.

"Perhaps we have waited too long and as a hapū we're not prepared to wait any longer, something needs to be done and so we've decided to place the rāhui."

Further details about the rāhui will be agreed at an upcoming hui with all stakeholders, Mr Edwards said.