When a Christchurch suburb faced losing its post office two years ago, it took drastic action to keep it open with volunteers. 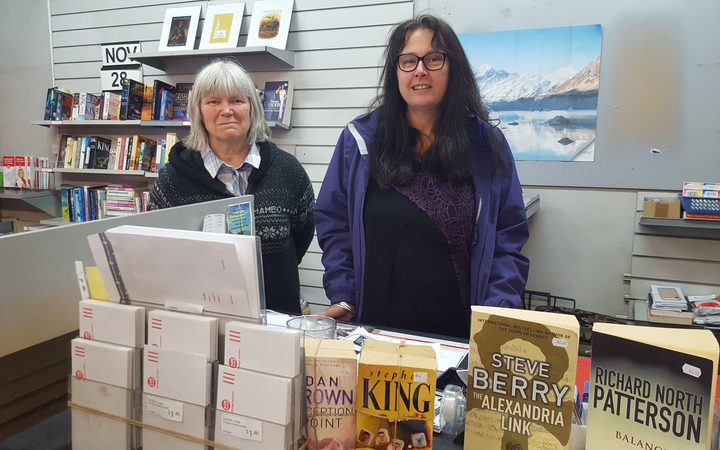 Jenny Smith and Janice Carney helped to save the post office in Stanmore Road in Christchurch when it was threatened with closure. Photo: RNZ / Rachel Graham

This week NZ Post confirmed it wants to shut its last 79 stand-alone post shops, with mail services to be offered within supermarkets and pharmacies instead.

The Stanmore Books and Post in the Linwood Village looks pretty much like any other post shop around the country except the workers behind the counter don't get paid to be there.

The post shop was on the verge of closing two years ago when the previous owner wanted to retire, but couldn't find a new buyer.

Then Te Whare Roimata, a community trust which offers services to the suburb, stepped in.

Te Whare Roimata co-ordinator Jenny Smith, who is also one of the volunteers at the post office, said the neighbourhood lost over half of its shops in the earthquakes, and they couldn't stand by and let it lose something as essential as the post office.

"Some of the lifeblood has been taken out as a result of prior to the quake when we lost Work and Income from this neighbourhood and our bank. Then if we'd lost this, on top of losing over 60 percent of our shops, it was really going to have a huge impact economically. They are the sort of things which the Government is maybe now showing some leadership now in needing to take into consideration now, when services like this are going to be cut back."

Te Whare Roimata had to take on the lease for the building, pay for a licence fee, and now deals with the on-going rental, insurance and wages for one co-ordinator who oversees the operation and the ten volunteers.

The post office is open Monday to Friday 9 to 5pm, and all volunteers have to undergo training on the postal systems, and a police check.

They don't offer banking or services such as car registration, but do offer all postal services, as well as selling used books, stationery and cards.

While RNZ was in the shop there was a steady flow of customers, and shop co-ordinator Janine Carney said they have many loyal customers who come to them just because they like the way they operate, but some customers would struggle to access shops further away.

"There is an elderly community around here, and people with disabilities. So for those people who can't walk too far if this went what would they do, where would they go? Some people are computer literate, they can't navigate around a computer, so for those sort of people if this left they would just stop communicating with a lot of people."

One of those loyal customers, Nick Williamson, has lived in the community for 17 years.

He had popped into to post some parcels but said the shop offers more than just postal services.

"It is like a community resource. Where people come in there's friendly staff we need more of these things just to keep the community going, Because a lot of these things have closed down and it makes a colder kind of world."

Mr Williamson said he uses the post office because it is close to home and the staff are friendly, and because he thinks it is important to keep it operating.

"These people are to be admired, because they've saved it really. It is a community resource which we really need, and I give my thanks to them for keeping it going."

Linwood Village is a lower socio-economic area and beggars are a common sight outside the few remaining shops.

Jenny Smith said suburbs like Linwood will struggle to find people to take on a New Zealand Post franchise if stand alone post offices are closed.

Other volunteer run post offices already operate in Fox Glacier and Ngaruawahia, but Jenny Smith warned others who like the idea that it's costly to run and not easy to find volunteers with the time or skills to manage a post office.

She said she was disappointed that New Zealand Post looks at the service as a business not as a community asset, but was heartened by the Government's talk of creating community hubs potentially providing postal services as well as banking and other services, and hopes that could be their future.

"Wouldn't it be fantastic if we might be one of those communities that was able to get that community hub that has been talked about, where this plus the bank and other service could be put together."