This morning's announcement that the Pike River Mine will be re-entered has come as a relief for many people in Greymouth.

Entering the 2.3-kilometre-long tunnel will be attempted starting in February, at a cost of $36 million. The aim: To recover the bodies of the 29 men who died there and search for clues as to why it exploded.

Etu organiser Garth Elliott has been at the forefront of looking after the families of those who died in the mine.

He said re-entering the mine was a good start.

"A lot of people talk about closure but I don't think there's going to be closure for a lot of the families and a lot of people, in fact, for quite some time.

"I don't think it's going to take just this to create the closure but at the very least it will give them some understanding about what might have happened there and if there are any remains there they can bring them home to the families."

Grey District mayor Tony Kokshoorn, who was a central figure in the response to the disaster, said after eight years of bad news, today the families had something to be glad about. 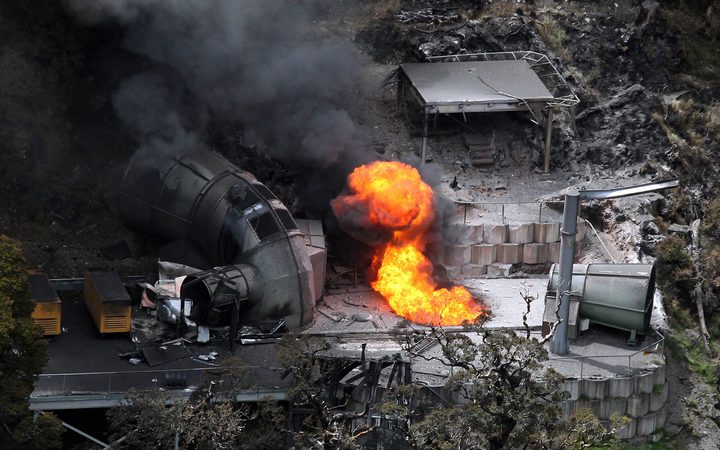 Flames coming out of a ventilation shaft at the Pike River Coal mine soon after the explosion in 2010. Photo: AFP

"Not just the families, Coasters have been waiting for this day.

"We've had a lot of false starts, we've had a lot of pain on the way. There's never really been any good news but today after eight years we got some news and that is that the coalition government does care about the families."

West Coaster Ally Ealam said the pain of that day was still fresh for people in Greymouth.

"Actually we've never really fully recovered, so I just think it's a huge huge victory for the families and the West Coast community itself because we all knew somebody up there."

West Coast man Pat Kennedy hoped they uncovered clues as to why the mine exploded so they could finally hold somebody accountable.

"To me there's too much pressure on making money, getting the coal out in a hurry, all those short cuts that were taken. . . the pressure from the management."

Greymouth woman Jane Wells said the men should be left to rest in peace.

"One fellow I know really well, his family are really happy for him [their dead family member] to be where he is. They always said that right from the start.

"I understand the others wanting to go in but what are they going to find? It's going to be quite horrific if they do find something."

After the explosive methane is purged from the mine, a team will go into the entry tunnel - first to 170 metres inside and then beyond as far as an area of rock fall.

They will look for clues as to what caused the explosion and be ready to recover any remains.

Electrical equipment just before the rock fall will be examined to see if an electrical fault is to blame.

Mr Kokshoorn said he was told re-entry was going to be near impossible.

"This rock fall is between 20 and 50 metres long, and it takes up the full portal. You won't get past that rock fall, it's extremely dangerous, Pike Agency tell me, to even attempt to get past that."

The Pike River Recovery Agency has given itself until June 2020 to complete the exhaustive work of safely re-entering the mine and properly investigating what has gone on inside.