Royal couple’s visit might cost NZ, but how much is it worth?

The Duke and Duchess of Sussex's visit to NZ attracted big crowds and plenty of coverage. But it comes with a price tag - previous tours have cost about a million dollars. So what does NZ get out of it? Is it really worth it? Sarah Robson takes a look.

Prince Harry and Meghan walking hand-in-hand in the rain along a beach in Abel Tasman National Park.

Prince Harry and Meghan cloaked in korowai receiving a powerful powhiri in Rotorua.

Prince Harry and Meghan shaking hands with crowds of people wherever they go.

These are the pictures that have hit newspapers, television screens and websites around the world over the last few days, as the spotlight turned to New Zealand on the Royal couple's first overseas tour together.

All that international media attention is thanks to the 80-strong press pack that's been travelling with them.

Prince Harry's marriage to Meghan Markle had renewed American interest in the Royal family, he said.

"Having that number of press I think in New Zealand must have been quite a coup for the country."

Why such a coup? Mr Ship said the tour has been big news back in the UK.

Ship said he's been busy working on a programme that will screen during prime time on UK television screens next Monday.

"On our documentary we're focusing on taking as many landscapes and pictures that aren't of Harry and Meghan as we possibly can.

"I think all of that helps to build a fantastic picture of your country and to showcase the beauty of the landscape that I think most people in the UK know about in New Zealand and it's given us an opportunity to remind them about how beautiful a place this is."

Ship and the other British journalists have also been posting up a storm on social media.

Ship said he bussed from Wellington to Rotorua, and they stopped along the way on the Central Plateau to take photos, that have ended up on his Instagram. 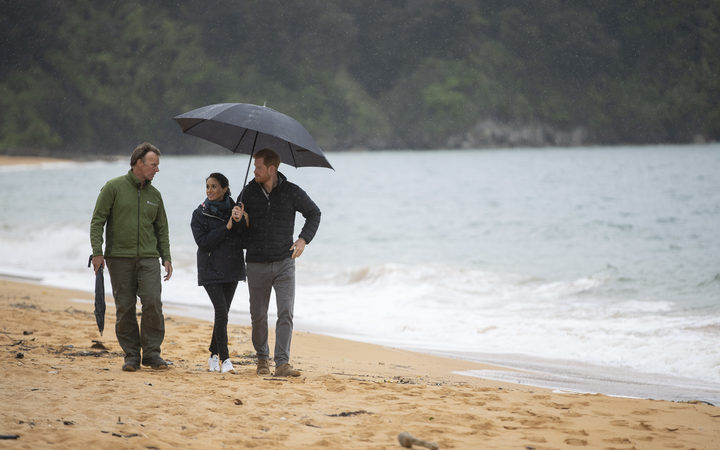 It's the sort of coverage that Tourism New Zealand is banking on to promote the country as a holiday destination.

While the figures for this tour aren't in yet, General Manager of Public Relations and Major Events Lauren Vosper said when Prince William and his wife Kate visited back in 2014, the value of the media coverage that tour generated was put at $70 million.

So how do they arrive at that figure? Ms Vosper said their offshore teams are monitoring all that media coverage.

"We check for key messages to make sure the stories are talking about the destination things that we want to be covered and then we attribute vaue based on what that coverage would have cost in pure advertising," she said.

"It's really hard to say that, 'I went to New Zealand because I saw the Royals on tour in New Zealand'. It's not just the one thing. We market ourselves through so many different things - formal ways, informal ways, in the Lord of the Rings - and all of those things put together create the New Zealand image."

As well as stunning natural scenery, fashion - like most other Royal tours - has been a big talking point.

This morning, Vanity Fair posted an article detailing every single one of Meghan's looks from the 16-day trip.

Amongst them all were four items by the well-known New Zealand designer, Karen Walker.

The Duchess stepped off the plane in Wellington and attended the official welcome ceremony at Government House wearing the new-season Banks trench.

Photos of her outfit were instantly beamed around the world and the fashion bible Vogue went on to label it one of the season's must-have coats.

"Of course the coat sold out, we don't have thousands of them anyway, we're a boutique brand, so selling out of a style is nothing unusual for us, that's perfectly normal, but yes, it sold out a little quick than it would have otherwise."

Walker said they've also had a 75 percent increase in traffic to her label's website from the United States, and she reckons that can be attributed to the Royal tour.

While Walker admits she's no stranger to having celebrities wear her garments, it was a bit different this time.

"It's always nice when you're in your own home town, right? I think that's where the emotional bit comes in to it.

"We're used to having well-known people wearing our product, every day there's something that comes across my in-tray, like Jennifer Lopez wearing our glasses was in my in-tray when I woke up this morning and that's great, but when it's in your own home town, or your own home country, and really your community and the person standing next to you when you're getting your coffee, there's really something quite different about that."