An anti-vaccination billboard erected alongside Auckland's southern motorway is being pulled due to public pressure, just one day after it went up. 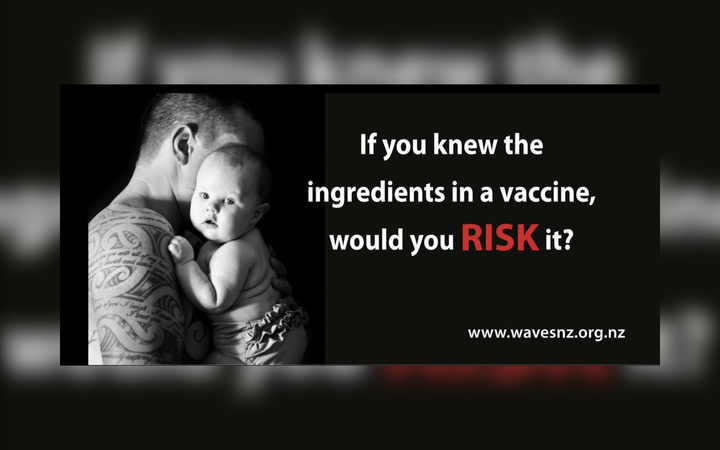 The billboard - close to Middlemore Hospital in Ōtāhuhu - was visible to anyone travelling south on State Highway One and pictured a man holding a child with a caption: "If you knew the ingredients in a vaccine, would you RISK it?".

Paid for by anti-vaccine organisation WAVESNZ - Warnings About Vaccine Expectations - the Advertising Standards Authority received more than 140 complaints about it in one day.

As a result, billboard owner Ad-Vantage Media is pulling down the billboard. Director Duncan Harris told Checkpoint he was naïve and did not fully understand the controversy that a billboard questioning the efficacy of vaccines would cause.

Health Minister David Clark said he was "pleased this potentially harmful billboard is being taken down" and was "encouraged that this appears to be the result of public pressure".

"That says to me that important messages about the effectiveness of vaccination in keeping our children healthy and safe are getting through to the public.

"It also tells me that New Zealanders have got a healthy resistance to harmful misinformation."

John Fraser, the dean of the University of Auckland's faculty of Medical and Health Sciences and an immunologist with more than 35 years' experience, said the billboard was "underhanded and deceitful" and "almost organised terrorism".

"Vaccination and immunisation is a perfectly safe procedure. It's been in place for many decades without any problem," Prof Fraser said.

"We vaccinated our children and all my colleagues I know support vaccination. The ingredients of vaccines are just bits of the virus, bits of the bacteria. So it's like getting the infection without actually getting sick. That's all that's in a vaccine.

"It just bewilders me to think they are still pushing this message that you're putting yourself at risk by getting vaccinated."

WAVESNZ spokesperson Truly Godfrey said she was disappointed the billboard was being taken down, and when asked what the organisation had hoped to achieve, she said: "Really just inviting parents to do some research into what the ingredients in a vaccine are."

Ms Godfrey said she believed vaccines were not safe but refused to say whether or not she thought parents should vaccinate their children.

She said the ingredients she believed people should be concerned about were "heavy metals" and "in particular in New Zealand there would be a lot of people concerned about the fragments of foetal DNA. That's a cultural thing".

There are no fragments of foetal DNA in vaccines in New Zealand.