SAFE calls for end to feedlots

Animal rights group SAFE says New Zealand's biggest feedlot puts our international reputation at risk and is calling on the Environment Minister to ban the practice.

The Five Star Beef Limited feedlot in Ashburton is New Zealand's biggest and has been running since 1991.

The cattle spend 18 months grazing, eating grass, before being moved to the feedlot where they are locked in square, uncovered pens, given vaccination to prevent disease and fed grains, for anywhere from two and a half, to eight months.

Animal welfare group SAFE has serious concerns about both animal welfare and the environmental impact of having nearly 20,000 cattle confined.

"The farmers who are doing this are just wanting to make a quick buck by putting the animals in these sorts of feedlots and it's putting our international reputation at risk," said Marianne Macdonald, SAFE head of campaigns.

The Five Star Beef feedlot isn't the only one in New Zealand but is by far the biggest, most others are several thousand cattle at most.

"They've got no shelter from the blazing hot sun or from the freezing winter temperatures, they're just there, in those barren pens.

"There's no grass, it's called a zero grazing system, and those animals are forced onto a grain diet for the months before they're slaughtered for beef. That can cause a lot of welfare issues as well, the grain can cause bloating and diarrhea in those animals." 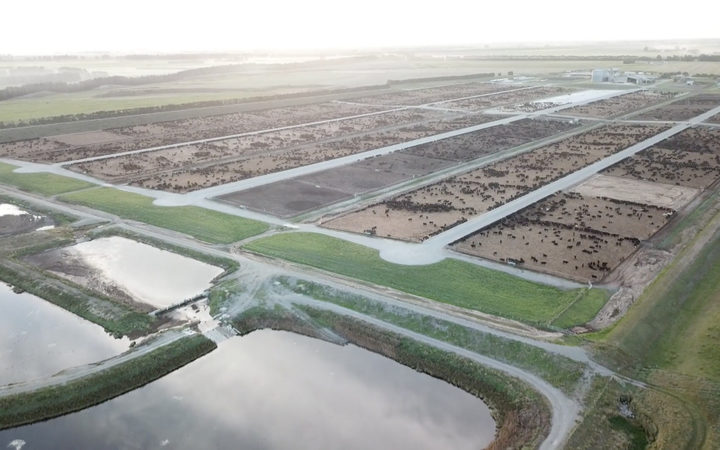 Fish and Game wants them banned too.

Chief executive Martin Taylor said they're at odds with attempts to clean up waterways.

"The Ministry for the Environment is quite clear that sediment runoff is one of the big problems for New Zealand. We know it's damaging the environment and yet we allow practices like feedlots to continue.

"One of the indictments on New Zealand is that we identify an issue, which is erosion and sediment, and then we just turn a blind eye to what's causing it. And one of the things that's causing it is feedlots.

"Intensive farming is not good for the country."

Beef from the Five Star Beef feedlot is sold extensively throughout the country under the brand Wakanui Beef.

While most of it is exported overseas, it is in New Zealand supermarkets, and more than 200 restaurants, from low end right up to five star dining.

No restaurants Checkpoint called today were prepared to talk about why they use it.

ANZCO, which owns the feedlot, wasn't available for an interview today but said in a statement that it adheres to the highest standards of animal welfare.