After weeks of petitioning, children at an Auckland primary school can now wear long pants as part of their uniform.

RNZ first reported on some Owairoa Primary School students who were freezing during winter because they didn't have trousers as an option back in June.

Parents were then told by the Board of Trustees that long pants would be too expensive.

Not satisfied with the response, Jaime Travis, whose son Levi goes to the school, went to appeal the decision.

At the board's last meeting, Miss Travis was then shown samples of what the long pants could look like.

And yesterday parents received official confirmation in the school newsletter that the trousers could now be ordered online.

"It could have gone either way really [based on] how my dealings were with the board and the principal.

"But it turned out really well, the chairman and the principal were really lovely," Miss Travis said.

"They put everything in perspective, they were dealing with a lot of stuff so they weren't just overlooking the requests from the parents.

"They were just really busy and got to it as soon as they could."

Miss Travis said she was also pleased that this had taught her son Levi to fight for what he believed in.

Levi said his pants had already been ordered and he would be wearing them as soon as they arrived.

Other parents were also happy with the outcome. 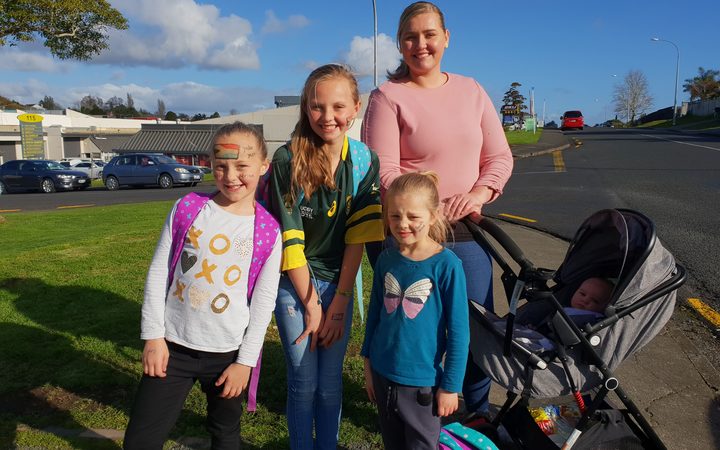 Madeline Mostert, whose three daughters all go to the school, said the announcement was a relief.

"We were very, very excited because there are days when my children don't want to go to school because it's too cold," she said.

However, the chairperson of the board of trustees at the primary school, Bruce Howard, said he did not expect all children to make the switch.

He said the school had track pants as an option in the past - not everyone wore them and there were problems.

"They just didn't wear well, the knees wore out on them," he said.

"They were pretty untidy with children going around with holes ... or patched up pants."

"They were not popular with a lot of parents because [the children] would get [the pants] wet, playing around at lunchtime and they would stay wet."

Mr Howard confirmed the cost of the long pants was also an issue for the board.

But after looking at what other schools were doing and consulting the community it decided to offer the new long, cargo pants as an option.

And for Levi and other kids who have been cold, that has been all they wanted - to get their long pants before the end of winter.