Chch council concerned it might lose control over water services

The Christchurch City Council is pushing back against a suggestion that control of water networks could be taken off local authorities.

The government is looking to see if the delivery of water services could be amalgamated or centralised.

An inquiry into the Havelock North gastro outbreak - where thousands of people fell ill - found that dedicated and aggregated water suppliers could be a way to stop it from happening again.

But this work comes as Christchurch ratepayers already fork out millions of dollars to protect the city's drinking water from contamination. 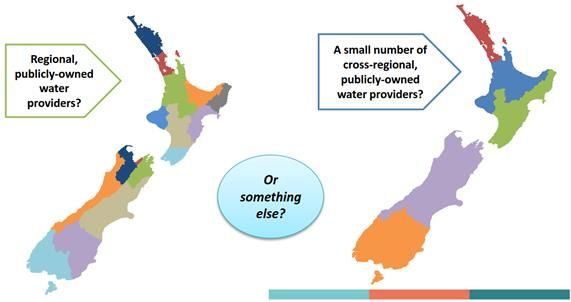 Options being considered for Three Waters management by the DIA. Photo: DIA

Today, the council voted to make it clear it did not think Christchurch ratepayers should pay to upgrade other district's infrastructure.

Councillor and former mayor Vicki Buck told a council meeting today that was not fair, as Christchurch residents were  already having to pay for their own water supply to be upgraded.

"You've got an issue of small rural authorities who can't actually deal with this problem, so 'bad news Christchurch residents and ratepayers you get to pay for that as well'," she said.

Ms Buck's concerns were quickly echoed around the council table, councillors voting unanimously against its ratepayers picking up the cost of fixing water networks in other districts.

They were also opposed to being part of a company or authority that would manage such a scheme, which is an option being considered by the government.

Deputy mayor Andrew Turner was worried about the repercussions of such a move.

"Once you have created a CCO (council controlled organisation) or another vehicle, it is very easy ... for that CCO to be subject to privatisation which would then see control of the water supply further removed from the people," he said.

Ms Buck said she asked the Department of Internal Affairs, who is leading the work, to meet the council to discuss their concerns.

A spokesperson for the DIA said it was still early days, and high-level options would be put to cabinet later this year.

"There is a question as to whether and how councils and communities can afford the necessary upgrades and infrastructure to meet safety standards, consumer expectations, environmental regulation and affordability," they said.