Oncologists including the cancer society's top doctor say the government's drug agency, Pharmac, is failing to keep up with the latest cancer treatments - with many New Zealanders missing out.

Doctors from around the country and overseas are heading to Parliament tomorrow to discuss the issue with health officials, including the Health Minister and Pharmac representatives.

Among those attending will be Australian oncologist John Zalcberg, a cancer professor at Melbourne's Monash university and co-chair of Australia's national oncology alliance.

After speaking to oncologists throughout New Zealand, he said they were increasingly despondent about the Pharmac-funded drugs they were able to provide patients.

"Wealthy people get these drugs - we're not talking about the wealthy people," Prof Zalcberg told Checkpoint with John Campbell.

"We're talking about the average person on the street who doesn't get them, so they're despondent because they can't provide the right treatments."

He said New Zealand was falling well behind Australia with its treatments.

He said one drug, crizotinib, was just one example of drugs that New Zealanders weren't able to access through Pharmac.

"It's available in over 50 countries around the world, there's probably 100 patients in New Zealand that would benefit - if they received it, the improvements are 50 percent. It's a very powerful drug."

He recognised funding was always an issue, but said much poorer countries than New Zealand had been able to fund crizotinib.

Prof Zalcberg has been brought to New Zealand by Medicines New Zealand, an industry association in whose interests it is for Pharmac to spend more on drugs.

But he said he was adamant it was patients he was lobbying for, not pharmaceutical companies.

"Pharmac takes on average three years to review an application for a brand-new cancer drug, and that means that Kiwis are missing out, and other countries like Australia, and Canada, and the UK, do manage to have a system that can facilitate a mix."

"He is someone who represents the interests of Big Pharma, and he's also an expert on these drugs, so he has a particular point of view.

"I listen to experts from across the medical spectrum and generally they say to me the Pharmac model is a very good model, it's a robust model and it means more New Zealanders get access to drugs than would otherwise be the case."

'It is very much becoming survival of the richest' - Cancer Society

The cancer society's medical director Chris Jackson said under the current Pharmac model, some people were waiting years to get drugs they needed.

"We have a two-tier health system, and it is very much becoming survival of the richest."

In May 2015, Leisa Renwick was given weeks or months to live - three years on she is alive and well, thanks to being able to advocate for better access to drugs, and her ability to pay for them. 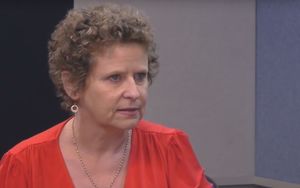 She said being able to buy Keytruda, a melanoma drug that was not publicly funded back then, kept her alive.

Dr Jackson said every day he was having tough conversations with people who were not able to afford the drugs, and Ms Renwick said she recognised she was more fortunate than many others.

"You think; you're poor, maybe you come from a background where you're not confident to hold your own with doctors, how do you find out about what drugs are available, and then when you do find out, how do you pay for them?"

She said the Pharmac model did not work.

"Something like this comes in, some new immuno-therapy drug that saves peoples' lives, where there was no option previously, that slowness of the Pharmac model doesn't work.

Pharmac said in a statement that the priority of an application was determined by a number of factors.

"Including clinical advice, the relative health benefits, the amount of funding available, the success of negotiations with the suppliers and/or new clinical data, and the mix of other funding applications being considered at any one time."