A unique red car has just gone on display at the Southward Car Museum, north of Wellington.

The replica of the first car raced by Bruce McLaren featured in the last year's documentary about the legendary Kiwi-born Formula One driver.

It has joined hundreds of old classics and rare vehicles at one of the largest private car collections in the Southern Hemisphere.

Bruce McLaren lived and breathed cars - the faster the better.

The sporting legend raced them until 1970 when he died at the age of just 32 while testing one of his cars.

McLaren restored a 1929 Austin 7 Ulster with his dad - Les - in the family garage as a teenager in the early 1950s - the beginning of his short but successful racing career.

The car is the new pride and joy of Southward museum manager Craig Andrews. 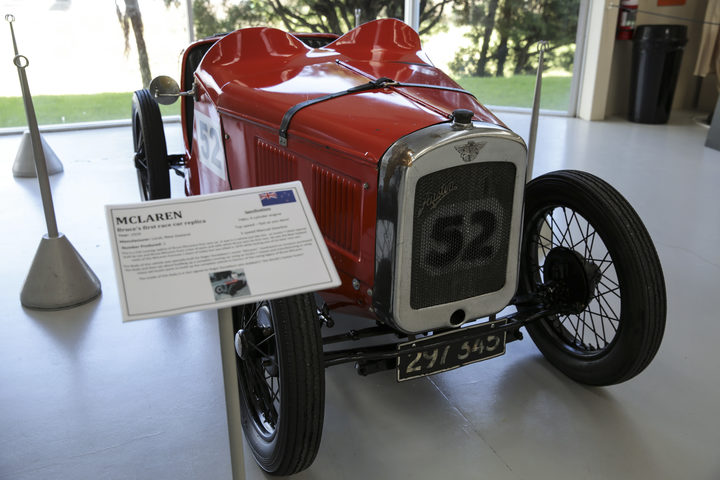 A 1929 Austin 7 Ulster, a replica of the one driven by Bruce McLaren, displayed at the Southward Car Museum. Photo: RNZ / Richard Tindiller

The museum paid around $5000 for the car body on Trade Me.

While you might not see modern race drivers Greg Murphy or Scott Dixon behind the wheel of a small Austin - the tiny car packed a lot of punch in its day.

He grew up watching McLaren race and said he was one of the greats.

"The people who knew Bruce really really loved him ... he was obviously a really inspirational person with a small band of Kiwi guys that he got around and took to England ... he really was a leader," he said.

The director signed a little tribute to McLaren in the red car World's Fastest Austin - a reference to his other film.

Fellow car-nut Duncan Fox is a member of the Bruce McLaren Trust.

He said McLaren would be proud to have the little red Austin on display.

Checkpoint caught up with him at the heritage centre at Hampton Downs, near Auckland, which is dedicated to the racing driver.

"What we've got here at Hampton Downs is the beginning of a permanent museum for Bruce, but not only Bruce, we celebrate as many of our good local drivers as possible... and we are lucky in New Zealand... it must be the water - but we seem to be able to produce good drivers," he said.

Roger Donaldson said McLaren was proof that New Zealand punched above its weight.

"People love to go fast... I think driving in New Zealand is a real pleasure... the roads are very demanding and there's not a lot of traffic on the roads compared with the rest of the world," he said.

Along with the small red Austin, and another 1969 McLaren replica, the Southward Car Museum plans to add a modern day McLaren to complete the set.