MFAT refuses to front up about Vietnam aid

The Ministry of Foreign Affairs and Trade (MFAT) is refusing to be interviewed about a $2.8 million aid project it funds in Vietnam.

Earlier this year, Checkpoint travelled to central Vietnam to visit the Ethnic Minority Economic Empowerment (EMEE) Project, a collaboration with World Vision New Zealand which MFAT has provided more than $2.1 million in funding for.

The project started in April 2015 and is due to run until September 2020 - Checkpoint visited to report on what that money is paying for and how successful the project, two thirds complete, has been so far.

The EMEE project is three percent of New Zealand's total aid programme in South East Asia -$64 million - and targets ethnic minority households in Huong Hoa in the Quang Tri province, providing coffee, ginger and cassava farmers with training and support - sustainable, organic ways to farm - and linking them to markets.

The mountainous region is one of poorest areas in Vietnam. In some villages more than 85 per cent of people live below the poverty line, which means they're earning around $US1 per day, and the child malnutrition rate in every district in the province is more than 30 percent.

The director of World Vision Vietnam, Tran Thu Huyen, who was born in Vietnam, said the area was the poorest she had ever seen.

"We help them to work as producer groups so they can save costs on the inputs, gain higher prices when they buy and sell as a group, and link them to buyers and coffee companies so they can ensure [a good] price and can support one another when the price fluctuates," Ms Huyen said.

The programme focuses on coffee, ginger and cassava farmers, providing them with training and support - sustainable, organic ways to farm.

It is a ‘teach a man to fish feed him for a lifetime’ type project, rather than simply injecting $2.8 million of cash into the area.

World Vision said it was very pleased with current progress, as lifting people out of poverty could not be done in just three years: “The starting point is very, very poor, so for us the change is very, very significant,” Ms Huyen said. 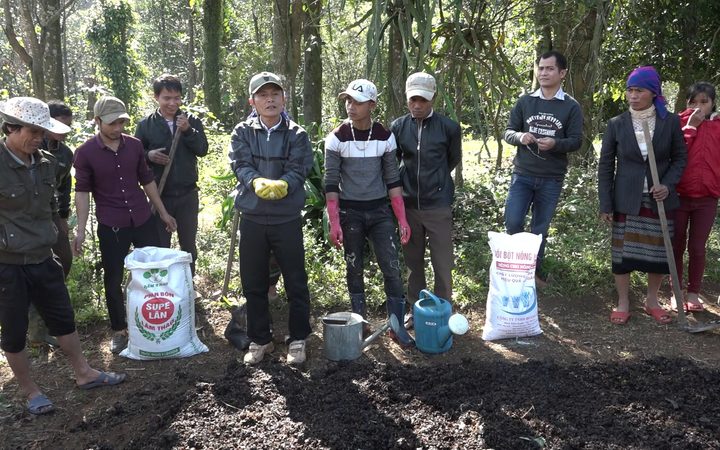 The project is a ‘teach a man to fish feed him for a lifetime’ type project, rather than simply injecting $2.8 million of cash into the area. Photo: RNZ / Zac Fleming

But MFAT has refused repeated interview requests to talk about the project and given no explanation why, despite embassy staff in Hanoi advising they would not comment because MFAT staff back in New Zealand would be interviewed.

MFAT provided only a statement attributable to an unnamed spokesperson: "We expect that this activity contributes to strengthening our relationship with Vietnam," it said.

"The project's goal is to improve the economic well-being of poor ethnic minority households with children. In the long term, the intended outcome is increased income and productive assets for producer households."

But after three years World Vision said nearly a third of the 483 coffee farmers in the EMEE project had not seen any increase in yield or revenue, and MFAT was not able to provide any reports that outlined progress - though it did say it "undertakes quality assurance processes".

While a revenue increase from $395 to $1000 may not be significant in New Zealand standards, such an increase for a farmer in Huong Hoa would see them no longer classed as living at the poverty line.

"The establishment of savings groups have also contributed to the increase participation of ethnic minority women in the project, introducing a habit of saving in the communities," MFAT said.

"We expect to see sustained income increases and the percentage of households able to provide well for their children at the end of the project.

MFAT said any future funding beyond 2020 "would depend on in the first instance whether the community identified if any further assistance was required".

"There would then be an opportunity to discuss with World Vision NZ and MFAT whether further New Zealand funding was appropriate."