The case of a teenager who was sold for sex by her mother and her partner only came to light thanks to a chance meeting with a Jehovah's Witness. 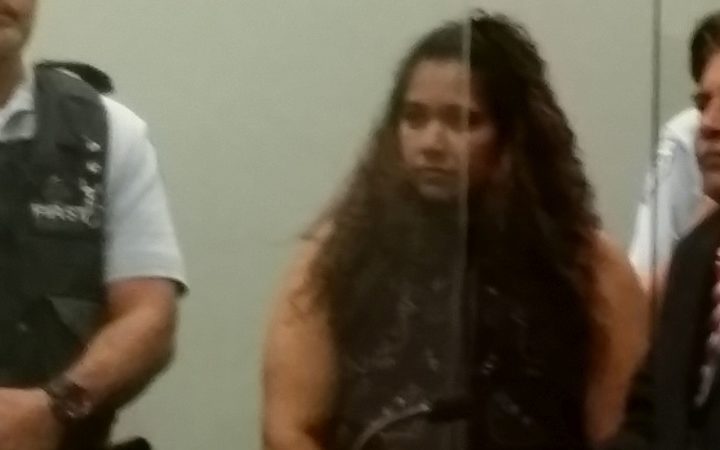 Kasmeer Lata during sentencing at the High Court in Auckland Photo: RNZ

The Jehovah's Witness met Kasmeer Lata's daughter while she was knocking on doors in the teenager's neighbourhood.

RNZ understands the pair formed a friendship and attended church together before the offending happened.

After the teenager was forced to have sex about 1000 times for money over a 18-month period, she reconnected with the Jehovah's Witness and began telling her what had happened.

With her help, the teenager then went to police to tell them about the sexual exploitation.

Today, more than a year later, both her tormentors have been jailed.

At the High Court in Auckland this morning, Lata's partner Avneesh Sehgal was sentenced to four years and eight months in prison for his part in the offending.

He had his eyes lowered to the ground for most of his sentencing, only looking up to communicate with his translator and lawyer.

Sehgal was supposed to stand trial in mid April but just six days before it was due to start, he was arrested at Auckland Airport trying to board a flight to India.

He then pleaded guilty for receiving earnings and sexually exploiting Lata's daughter.

Justice Lang told Sehgal he knew the teenager was vulnerable but he still used her.

"You assisted the victim's mother to perpetrate the offending against her own daughter," he said.

"You must have known the gross breach of trust that was being committed here."

Sehgal paid for some of the advertisments promoting the teenager as a prostitute, occasionally drove her to have sex with clients and put her earnings into his bank account.

Crown Prosecutor Natalie Walker argued those actions condemned him as someone actively helping to sell the teenager for sex.

"The offender Mr Sehgal played a key role in this offending by providing necessary assistance in the form of transport and access to legitimate bank accounts to deposit cash and make advertising payments," she said.

It has been estimated the teenager made about a $100,000 from the prostitution, about half of which was pocketed by Lata and Sehgal.

Ms Walker said without Sehgal the offending wouldn't have occurred.

"While accepting that Mr Sehgal assisted the offending, he was really an aider and abettor to...Ms Lata," he said.

"He allowed his bank accounts to be used because Ms Lata was unable to open one."

"It's not accepted that Mr Sehgal was essential for Ms Lata's offending to occur."

Mr Newell said Seghal is likely to be deported to India after he's served his sentence.

Justice Lang told the 26-year-old he played a significant role in harming the teenager and that normal parole conditions would be inadequate.

He gave him a minimum sentence of two years and four months.

Speaking after the sentencing, detective inspector Colin Higson described the case as shocking.

"The fact that this mother and her partner were prepared to essentially use her daughter as a commodity to raise money for the family and abuse that position of trust and...that relationship - that's particularly disturbing," he said.

Mr Higson hopes the jailing of Lata and Sehgal will spur any other vulnerable individuals to tell police.

Lata was jailed for six years and 11 months last month for with a minimum sentence of three years and five months.

The Crown has since moved to appeal that, on the grounds that it is manifestly inadequate.

Lata's sentence was the first of its kind in New Zealand, where someone was jailed for sexually exploiting their child for money.