Southland is believed to be the origin of where Mycoplasma bovis first took hold in New Zealand because this is where the earliest known cases of infection have so far been discovered, the Ministry for Primary Industries says.

This overturns an earlier theory that a South Canterbury farm belonging to the Van Leeuwen Dairy Group was the first farm to be infected.

While steps have been taken to trace and deal with cattle transported from the Van Leeuwen farm since July last year, controls on cows coming out of Southland have only been brought in much more recently.

This contributed to the disease spreading from one farm in Southland to as far as Mid Canterbury and more recently, Waikato.

RNZ understands the Southland farm, which is just outside Winton, belongs to Alfons Zeestraten.

All of the infections detected so far from Southland to Waikato could be linked back to three farms owned by Mr Zeestraten and his family.

Mr Zeestraten said he and his wife were good people who had been portrayed as criminals. 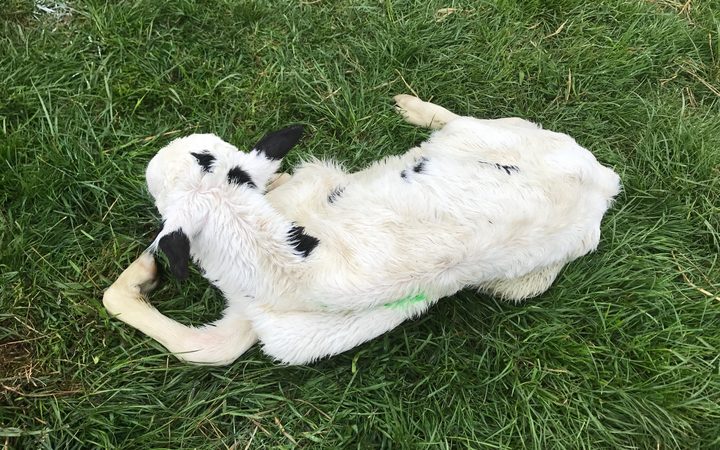 A sick calf from the farm of Sarah Flintoft and Ben Walling which had to be culled. Photo: Supplied

He said he did not know how the disease got onto his farm, and that he had neither done nothing illegal nor illegally imported any bull semen or drugs that could have carried Mycoplasma bovis into the country.

Mr Zeestraten said he could not talk about the farmers he had sold infected cattle to until the ministry had completed its investigation.

Southland farmer Ben Walling said he had bought 60 calves from the Zeestraten's just a month prior to the declaration that those farms were infected with Mycoplasma bovis in December 2017.

He said he immediately locked down his own farm in case his was next to be infected.

Mr Walling said he knew something was up with the purchased calves the day they arrived.

"With the cows that were still alive when they did the blood test, about 94 percent of them were infected. There have been just over 400 I think it was that were destroyed on the property ... MPI did a cull on the property or we shot [them] just because of animal welfare reasons, they were just so poorly they couldn't carry on as they were," he said.

Watching the animals he cared for being put down was heartbreaking and not what he got in to farming for, he said.

"When you go farming you expect to have bad days and if you're not willing to farm through those, you probably shouldn't be a farmer, but this sort of thing is getting a bit extreme."

On top of the sick calves that had to be destroyed and buried in a landfill, his remaining 1300 healthy animals had to be sent to the works early, robbing him of the money he had been hoping to make through fattening them up.

His partner, Sarah Flintoft, said she found the loss of the animals particularly hard to take.

"To get hit like this is just devastating for our family. We wanted to keep farming, that's all we ever wanted to do, is to go livestock farming. It's quite a crushing blow really," she said.

The loss of the calves had also been tough for their three children, she said.

"To have people coming around all of the time and seeing Mum and Dad a bit stressed and upset about it all, it's taking its toll on our family. Maisy, all she wanted to do was to be a farmer ... she said to me early in the piece, I don't know if I want to be a farmer now."

The Walling's farm was likely to be out of action for at least seven months as an infected property, meaning they would not be able to use the feed they had been growing in preparation for winter. 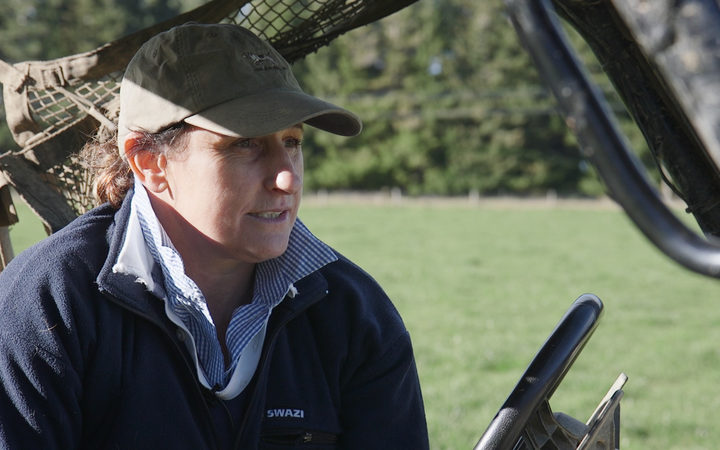 Southland farmer Sarah Flintoft said they have had to cull 1700 calves well before they were ready to be sent to the works. Photo: RNZ/Dan Cook

In addition, there was the ongoing cost of having to disinfect every vehicle that came on to their property to prevent the disease being transferred to somebody else's place in the faeces from infected cattle.

"Our total costs on this farm at the moment is about $1.3 million and rising, the total cost at the end I don't know, it depends when they get this sorted out and cleaned up so we can get on with farming."

Vet South owner in Winton Mark Bryan said while the first infections came off the Zeestraten's farms as early as December 2015, just how Mycoplasma bovis ended up there remained a mystery.

"So I think it's a bit unfair to speculate and certainly not very fair on them. They're people who are part of the community and they need to be looked after as much as anybody else really."

While dairy farmers had been able to continue milking their infected cows and bring in an income, Mr Bryan said beef farmers such as Ben Walling had to cull their entire herd and start again from scratch.

Adult cows could take a while to show any sign of the disease whereas calves had very little resistance, he said.

"I think the worst part about it is we know we can't treat them, there is no treatment for M Bovis, the best of them die quickly or are culled and the worst of them have a horrible slow death."

In amongst all of this the business of farming had to carry on in Southland that meant moving cattle further afield for winter grazing, Mr Bryan said.

"Virtually every cow in Southland and South Otago has to move off the dairy platform in the next 10 days and we still don't have a clear picture of how that will happen and what it will mean for farmers under restrictions. Or if you're a grazier and you've got a contract to take cows that are still being tested, they might be put under a restriction in the next week or so. That lack of clarity is causing a huge amount of stress."

There were now 39 properties infected with Mycoplasma bovis.

The government had committed $85 million in funding to a frontline response to Mycoplasma bovis.

A decision on whether to cull infected cattle to either eradicate the disease, or find a way to live with it, was expected to be made later this week.

However, Ms Flintoft said the damage had already been done.

"I knew just about every single calf, we had our pet calves, we named calves, we'd give them a bit of a pat or a cuddle whenever we went out to feed them because you had your favourites... I'm quite devastated by the fact that they have now all gone.

"I think people don't realise how haunting a farm that doesn't have any animals on it is when it had been such a busy productive farm."

The couple will find out if they are clear from Mycoplasma bovis in July and able to get back to their farming duties as usual.