Dogs Nuku and Fatso rescued 9 days after falling down cliff

Nine days and one failed rescue attempt later, two dogs stuck in a remote forest in the Hawke's Bay have been reunited with their owner.

Wairoa man Peter Te Kahika took his dogs Nuku and Fatso out pig hunting last Sunday when they fell over a cliff and became trapped.

Mr Te Kahika said he visited the dogs every day until they were rescued.

The dogs were chasing a pig in the Mohaka Forest when it abruptly changed direction, causing the dogs to run straight over the edge of a steep cliff.

He could hear the dogs barking at the bottom of the cliff, which was about 80 metres high, but he could not get to them.

"We could see them from up the top, this was on the Sunday, and then like during the week we could hardly see them - I couldn't see them anyway," he said.

Mr Te Kahika returned to the cliff a few days later with three friends to try to rescue the dogs.

One of them even scaled down the rough terrain, but got stuck and had to be rescued by emergency services. 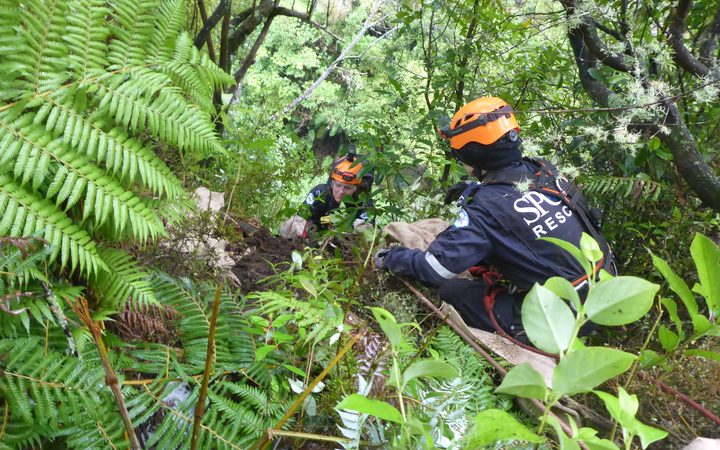 SPCA rescuers save dogs stranded in a remote part of the Hawke's Bay. Photo: SPCA

Rescue co-ordinator Gina Kemp said when her team got to the site they could not hear the dogs and thought they were too late. Shortly after they heard a howl and sent rescuer Jen Rizzi down the cliff.

"So Jen continued down the cliff and came across both dogs perched on a ledge which had sort of been made from fallen trees above a stream," Ms Kemp said.

"The dogs were there and pretty underweight and looking pretty worse for wear, but very much alive and very, very pleased to see Jen."

"I've got to take them to the vets for their ears and get them to have a look at them, but at the moment I've just got to keep them warm and give them a good kai," he said.