House that prisoners built now over the wire

By Anne Marie May

A year of hard work by inmates at Rimutaka Prison came to fruition today when a newly built house was lifted over the wire, ready to be used by Housing New Zealand.

The eight prisoners who built the house are part of a group of 150 men who gained trade training qualifications through Rimutaka's building and construction programme last year.

A crew from Britton's House Movers was onsite from early this morning, working with a team from Titan, who set up a 45-metre-plus crane to do the heavy lifting required to move the three bedroom house off the prison grounds.

Matthew* is part of this year's course and is into his 8th week of plumbing training.

He said he was enjoying learning skills which would be useful when he returned to farming once he had finished his sentence.

"I can use these skills wherever I go. It's free education and it's not only good for us, but when we go back to society, it's going to benefit society as well."

Matthew said he had encouraged other prisoners in his unit to also join the programme.

"If I wasn't here I'd be sitting in my cell and this is quite productive for me and I get an education out of it as well.  [But] it's up to the individual if they're going to benefit themselves. It's up to [them] to take it."

Jason* was also at the workshop site, where he's doing a course in painting and decorating and he's very enthusiastic about what he's learning.

"I love it. It gives me a meaning to get out of the unit during the day. I'm achieving something out of it and it doesn't interrupt my other study.

"I'm also doing NCEA; a foundation skills course through the Open Polytech. [I'm studying] self and personal wellbeing, then employment, then financial [literacy] and then a course on living in New Zealand."

Jason* said he would have gained 60 credits for NCEA once he had finished the courses, and having a trade to go to when he left prison would reduce his risk of returning there. 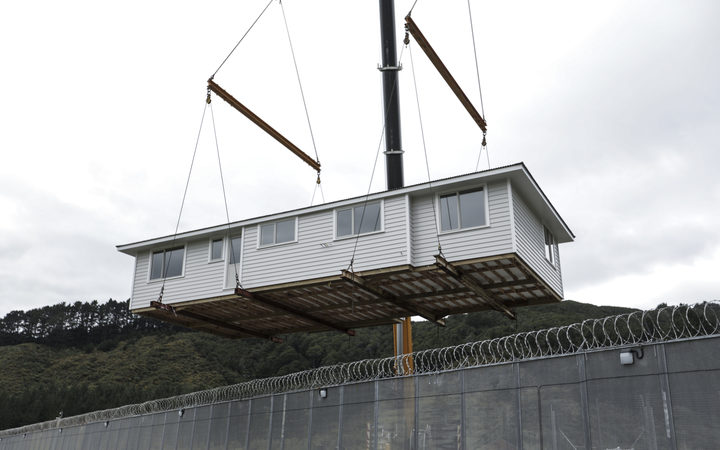 The first house built by carpentry students at the prison being lifted over the wire so it can be transferred to a permanent site. Photo: RNZ / Rebekah Parsons-King

Curtis Scott is a Weltec painting tutor who works with the prisoners and said they were actually very similar to the young people he worked with at the polytech.

He had some misconceptions of what it would be like to work in the prison, thanks to American TV shows, but said Rimutaka is nothing like that - the men enjoy learning a trade and there was strong support from the Corrections officers.

Mr Scott said it was great to see the prisoners developing as people.

"We're giving them the skills of the trade, but not only that, it's the soft skills, the communication, working in a team, working with others from different cultures, that sort of thing.

"It's stuff they can take away with them once they're released. They can use it in society and hopefully in employment."

Mr Scott said he did not feel any sense of danger while working with the prisoners.

"We have a focus on health and safety and they all know how to use the hand tools and power tools safely and we create a great rapport with myself and the students." 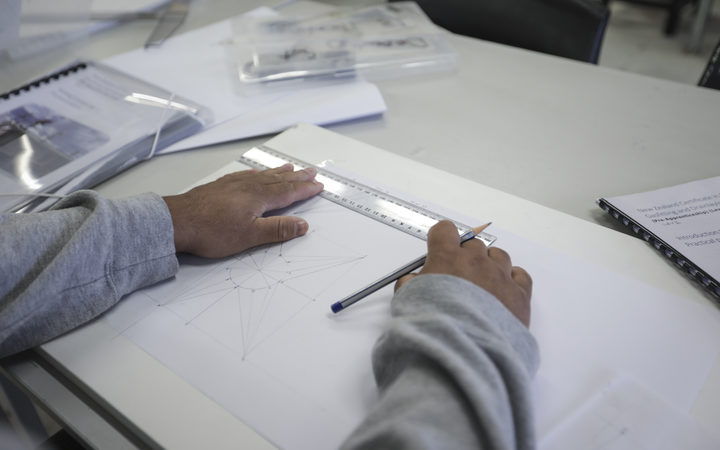 The Corrections chief, Ray Smith, said the trades programme at Rimutaka also made the inmates very marketable in an economy which needed people who could do work such as building, plumbing and painting.

Last year, the Corrections Department placed 1000 people into jobs, half of whom had just been released from prison, he said.

"So the effort put into the rehabilitation front is actually converted into something real when they leave and that's been a really important development for us, to have people that actually go find jobs for people and put people in them."

Mr Smith said Corrections now had agreements with 125 employers across New Zealand who were willing to take on prisoners when they leave jail.

"Actually employers have stepped up and there are very few employers who won't give people a go. Our challenge is to make sure we support people on the way through."

Education Minister Chris Hipkins, whose electorate the prison is in, was also there to see the house moved.

He too, saw real benefits in the prison's trade training programme.

"We have huge skill shortages in building and construction and are depending a lot on skilled migrants to fill that shortage. This is an opportunity to train local workers and ensure they're less likely to be coming back to prison.

"They can come out from behind the wire, they can reintegrate back into society, they can become productive and useful members of the community and they're a lot less likely to reoffend and end up back [here]."

Mr Hipkins said the trades programme at the prison was also a really good example of different parts of government working together to achieve a good outcome.

As for Jason*, the trainee painter, he said his mother was stoked he was learning a trade and had told him he could paint her house when he gets out of jail.