New Zealand First leader Winston Peters says National has made a "mountain out of a molehill" over claims one of his backbenchers threatened an opposition MP. 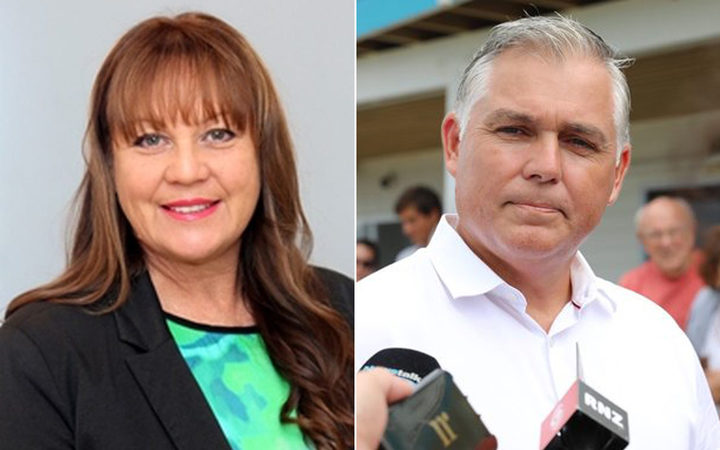 National MP Mark Mitchell (R) said NZ First MP Jenny Marcroft told him over the weekend to stop supporting a project in his Rodney electorate if he wanted it to get public funding. Photo: Supplied and RNZ/Dan Cook

But National leader Simon Bridges said the Prime Minister must get to the bottom of what was a "very serious rotten situation".

National's Mark Mitchell yesterday said Jenny Marcroft told him - on behalf of a minister - to stop supporting a project in his electorate if he wanted it to get public funding.

Prime Minister Jacinda Ardern said she had been assured by all four NZ First ministers that they'd had nothing to do with it and she now considered the matter resolved.

"My job is to take ministers at their word. They have each assured me they were not involved in what's happened here.

"And that leaves it to be an issue about an MP's behaviour and for that it's up to the leader of New Zealand First to respond."

Mr Peters said he would not be taking further action against Ms Marcroft.

But he said he didn't know what Ms Marcroft had meant to say which had been misconstrued.

"I've got no idea how it came out wrong because I wasn't party to it - I wasn't there - how would I know?"

The Mahurangi River Restoration Project wasn't even eligible for funding from the Government's Provincial Growth Fund as it was in the Auckland Super City, he said.

Mr Peters said Ms Marcroft called him on Saturday about the conversation and he told her she should apologise for any misunderstanding.

"I am astonished that a simple matter of an apology escalated into a press statement - and a mountain's now become a molehill."

Mr Bridges said it was "rotten politics" and "should not be how we do democracy in New Zealand".

He said Ms Marcroft was sending a clear message: "If we don't behave, if we don't shut up, we don't get money in our electorates."

And he said Ms Ardern can't simply pass the buck.

"Who's in control here? What's going on? What I've heard the Prime Minister say is that effectively this is Winston Peters' problem.

"This is a government. You can't compartmentalise this. She needs to lead it and she does need to get to the bottom of it."