Half of the unresolved EQC claims for quake-damaged properties in Christchurch are for re-repairs, and a lawyer representing these cases says they’re just the tip of the iceberg.

Information obtained by Checkpoint under the Official Information Act revealed 1273 of the 2624 unresolved claims are for re-repairs. Most of the other claims were call-back requests disputing repairs or cash settlements.

The unresolved claims for repairs are for work that was done but which was unsatisfactory, disputed or incomplete, which means EQC now has to go back to do, in some cases, much more significant work than what was originally done.

Lawyer Peter Woods has acted for 200 homeowners claiming their EQC repairs weren’t complete or up to scratch.

“The classic situation is they say ‘look, I’m concerned that EQC didn’t assess the earthquake damage to our home properly, and when the Fletcher EQR people turned up to repair it, they didn’t repair it properly either.”

All of their claims for re-repairs went over the $100,000 cap, and the biggest issue was foundations.

Mr Woods said he receives one or two phone calls a day from people wanting him to represent them over re-repairs. He’s not advertising – it’s just greater awareness “of the extent of the problem”.

"Look, I don’t want to be alarmist, but I think there’s thousands of homes in Christchurch that haven’t been assessed properly or repaired properly.” 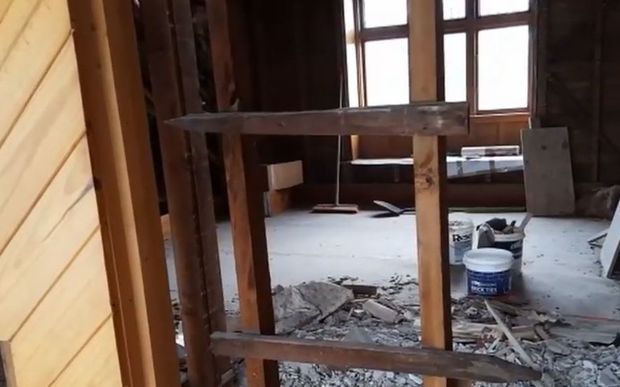 One house that was waiting for repairs or demolition in 2016, with insurers still assessing claims.  Photo: RNZ / Checkpoint

Jacqueline Tither said her home was repaired by Fletcher for EQC in 2011.

They repaired the foundations with glue, put concrete over and painted, she said.

“The December quake reopened those cracks in exactly the same places. I’ve got photos of before taken by EQC then photos of after. Same spot, so it was really cosmetic.”

“They came in and Fletchers had a contract that happened to be a painting decorating company come in and do the repairs to the house. When I looked into it further they had never assessed or even looked at structural damage.”

He hired his own engineers to assess the structural damage and went back to EQC.

“They pulled their act together and got a good team in front of me and said ‘well OK we do agree that we missed this, we do agree that we have repaired it cosmetically and not structurally’, and they wouldn’t put that in writing but what they did certainly admitted they accepted the damage in 2016.”

His claim was over cap so was passed on to Southern Response.

He drove the process himself, but Mr Woods said the people contacting him often found out through a third party.

“Particularly when they’re coming to sell their house and there’s a pre-purchase inspection and that inspection report says the foundations are stuffed, the homeowner says ‘well, hang on that’s supposed to have been fixed by EQC, then it gets them into an investigation into what has gone wrong.”

One case he has just settled was originally assessed by EQC for $50,000 for cosmetic repairs. The insurer has just paid out on a full replacement, at a cost of $600,000.

It’s unclear how many cases there are for re-repairs, or how many might surface in coming years.

EQC said its settlements were not “full and final” and it continued to receive call-back requests for remedial damage.

Mr Woods fears there are thousands of cases which will surface.

“It’s a systemic problem. I’m a very strong supporter of an inquiry into EQC,” he said.

“We need to know why this has gone so badly wrong and make sure it can’t happen again.”

Minister Responsible for the Earthquake Commission Megan Woods told Checkpoint that treasury was the monitoring agency so she was going back to them to check how many homes were having to go back for re-repairs versus callback requests.

She said one of the problems around people going over the $100,000 cap was information flow from the commission as well.

"Actually from the private insurers is their need to be able to get information from EQC when things go over cap so that they can get on with the repair as well.

"So it is concerning that this far down the track that we're still having people go over the $100,000 mark but it's more concerning to me when I hear that we just haven't got the information flow right to actually allow those repairs to actually get on and get done.

"Because people with broken homes don't really care who's holding their file, they just want their home fixed."

She said that she was very conscious that more claims could continue to come through as more repairs were found to be unsatisfactory.

"I've said that's exactly what I need to know as minister. I need that kind of clarity and I need to be able to meet those.