It could take months before the Takaka Hill Road resumes normal service, the Transport Agency says.

While one lane was opened yesterday, the job of clearing slips and rebuilding entire sections of road would extend into winter as the aftermath of Cyclone Gita became all too apparent.

There was more misery for businesses in Kaikōura as well with news the gigantic slips brought down down north and south of the town in last week's storm would not be fully cleared until the end of this week.

Access to Golden Bay and the about 5000 people who live there has been re-established with a twice-daily convoy, one at 7am, the other at 5pm, taking freight and light vehicles in both directions across the single lane that had been established around and over countless slips.

Starting at 5pm tonight, those towing caravans and boats would also be allowed across.

The Transport Agency's Frank Porter said now that access had been re-established, attention would turn to making long term repairs to the road.

All he could say at this stage was that work would take months and would stretch in to winter.

"There's a number of sections of road where we have it down to single lane and we're going to have to re-establish the road from the bottom of the slip right the way back up to the road."

For those on the other side of the hill in Golden Bay, who were cut off for five days, things were starting to return to normal.

But for businesses relying on tourists who were now in peak season, the bad press the bay had received in recent days had been fatal, Pohara Camping Ground owner John Tate said.

"It's a shocker. I mean normally this time of the year the camp would be three quarters full. Last night we probably had about 20 people here.

"So you know it's damaging all tourism. I would say the whole of Golden Bay, which is a real shame because everything's open and everything's just fine, it's just getting here."

John Tate wanted the Transport Agency to amend its notice to motorists which at the moment said only those needing to urgently travel over the hill should make the trip. 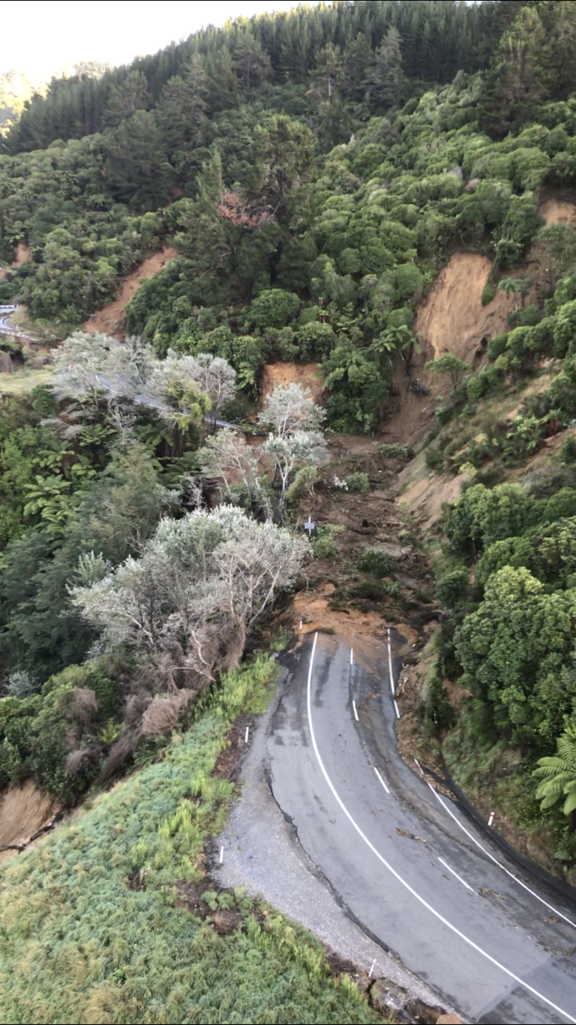 The Transport Agency's Frank Porter said those wanting to visit the area should still make the trip, with this caveat.

"All we're saying is you might not get out on the day that you planned to get out. The whole of the hill side on the Riwaka side, it is really fragile."

The last part of the country to feel the force of cyclone Gita was the Kaikōura coast where the impact had been just as great as Golden Bay.

Some parts received up to 200mm of rain in a short space of time, swelling hillsides already made fragile by earthquakes.

On Monday, it was announced the main road north and south of Kaikōura would remain closed until at least Sunday due to massive slips to the north and the road giving out through the Hundalees to the south.

The Transport Agency's Tim Crow said they were surprised at how much material came down from the hills.

"We did know there was a lot of material in the hills by the size of Jacobs Ladder [slip] was quite surprising. However that's what we're discovering, until the hill stabilises we'll be expecting some of these events so we'll be engineering our way out of them."

He said while visitors could still get in to the town via the inland route, many were put off making the trip because of the extra travel time.

As a result the business in his cafe had halved since Gita last week.

"We're still getting people coming in but lots of rearranging of plans, lots of cancellations. I suppose we've been really impacted in the likes of our cafe where you're fully staffed this time of the year and you have all of your staff just standing around with not a lot to do because we're not getting the through traffic."

It was a cruel blow after what was shaping as a record season for the town following a year out of action due to the earthquakes, Mr Buurmann said.

The Transport Agency said it would confirm on Wednesday exactly when the road would re-open.

While it hoped this would happen on Sunday, any more rain than is already forecast could push things out further.