The mass death of eels in a coastal Taranaki stream is being blamed on poor land management and the effects of climate change.

About half a dozen mature eels - known to Māori as tuna - lie rotting at the mouth of the Waitekaure stream at Pungarehu, which drought has reduced to a mere trickle.

One tuna is cemented in a putrid orange gunk while others lie upturned in rank oil-slicked pools of still water.

Another did not even make it that far - stranded high and dry at the other end of the underpass.

There are flies everywhere.

Between the tuna and the sea is a two-metre high dam of shingle and driftwood - the eels did not stand a chance. 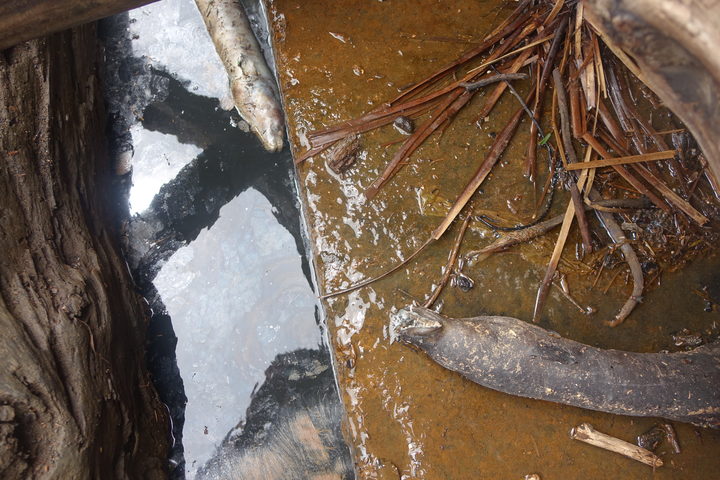 About half a dozen mature eels lie rotting at the mouth of the Waitekaure stream. Photo: RNZ / Robin Martin

The Waitekaure's kaitiaki or guardian, Tihikura Hohaia, said it did not have to be like this.

"There's a total lack of care for the smaller streams and then the feeders that come in on those are being drained and piped because they tend to be puna wai, short course springs.

"And farmers don't favour them because their cows bog them up so they prefer to run pipes through it, drain it and plant more grass over the top." 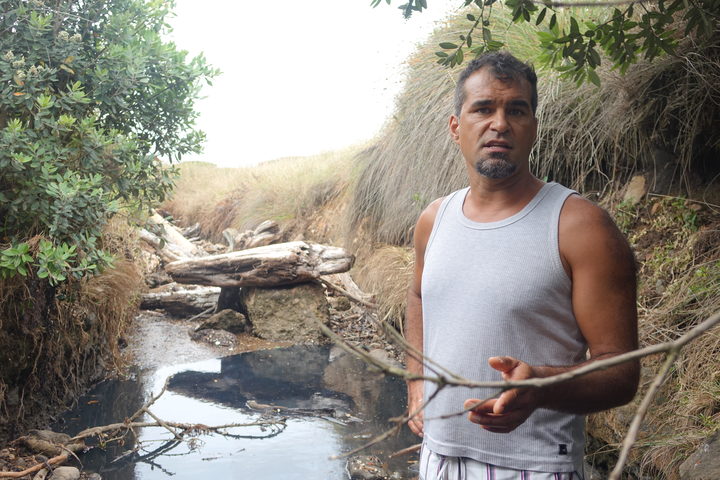 Climate change meant storm surges like the one that had blocked the stream and droughts were predictable, but no planning was being done for them, Mr Hohaia said.

The smaller water courses gave protection from such weather extremes, he said.

Instead, the water was heading straight out to sea.

"Over summer you would, in a healthy water course, expect those lungs to hold water back and release it slowly through these critical periods."

There were many other dead or dying eels upstream and in other nearby streams, Mr Hohaia said.

Trustee and educator at Te Whenua Tōmuri Trust, Emily Bailey, who posted a video of the dead eels on the trust's Facebook page, said the eels were a pointer to deeper issues.

"I guess what's happening down there is just a sign of the times with climate change, intensive farming and just poor management for a whole lot of reasons from the break up of rural communities to fertiliser companies getting out of control."

An iwi representative on the regional council's policy and planning committee, Ms Bailey said the council could do more.

"The council is run by the community so we need to tell them that we are not happy and we need things to be done better."

Council environment quality director Fred McLay said in a statement that coastal Taranaki had less that 50 percent of its normal rainfall over the past four months.

As a result, flows in lowland draining streams like the Waitekaure had been significantly affected.

Reports of stressed or dead eels could be attributed to naturally occurring low flows, he said.

That did not wash with Tihikura Hohaia.

"Look at it from my perspective, ... cause I can hear all the farmers out there and the Taranaki Regional Council making excuses for the farmers.

"I'm a farmer. I farm freshwater fish and my ancestors have done so for thousands of years.

"Where's the equality for my rights, when we're looking at my livestock rotting in front of our eyes?"

The regional council worked with landowners to protect and enhance habitat for native species such as tuna, Mr McLay said.

In the Waitekaure catchment there was 52 kilometres of streambank - 77 percent was fenced and 43 percent had riparian planting, he said.

A 2014 Landcare Research study found dairy farming intensification was contributing to an ongoing loss of wetlands in Taranaki.