Amputees are calling for an independent inquiry into the government's artificial limb service, which they say mistreated them and caused long-lasting physical damage.

New Zealand Artificial Limb Service (NZALS), which is owned and operated by the government, has long been the only place New Zealand amputees are referred to for treatment by district health boards and ACC.

However, some amputees have refused to continue with the service, saying they have a new lease on life after receiving treatment elsewhere.

Amputees throughout the country told Checkpoint  they lived in pain, and were never comfortable under NZALS. They said the service did not take their complaints seriously and that their calls for an inquiry to the former government were ignored.

West Auckland woman Jan Hansen, a former nurse who ran major health facilities, became an amputee in 2004 and said she was told no one else could fit a limb.

"You had to get on with NZALS because there was no one else, and that was from surgeons," she said.

She visited NZALS on a regular basis for adjustments to be made, but said it was never a comfortable fit.

"I had no skin on my stump, and I was trying to work. I mean, that's like walking on a blistered heel but a lot worse because you've got all your weight on that prosthesis, and I said 'what can you do to stop this happening'.

"And this is after nine and a half years, and [the prosthetist] looked at me and he shrugged his shoulders like this and said 'I don't know what to do'."

Ms Hansen said she had been under the care of a Wellington provider for about three years. 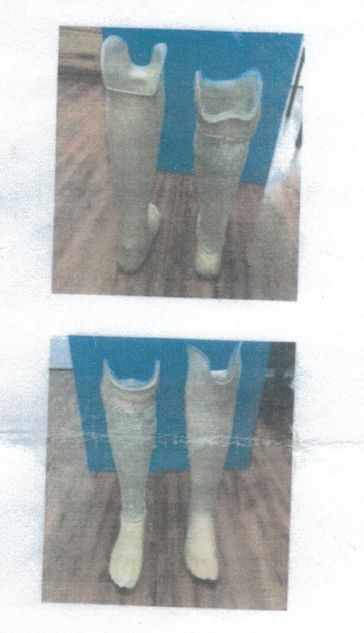 The NZALS limb Jan Hansen had is much shorter than the one her new provider has fitted her in, as seen in this photo. Photo: Supplied

"He draws your body on a piece of brown paper, and he knows exactly, he puts all the measurements. It was amazing to go through that. That had never happened for me. Never, ever happened. Cast made, on goes your leg and off you go," she said.

"It just was like a glove. It fitted absolutely perfectly."

One 57-year-old woman, who did not want to be named, has been an amputee for 45 years and has been under NZALS the entire time. She worked, had a good social life and raised a family but has been in agony for more than a decade.

"The last 12 years of my life have been a nightmare to the extent now where I can't even walk into the local shop and get a two-litre milk because I'm on crutches."

The trouble began when she started seeing a new prosthetist.

"He had me walking bent over like a pensioner, and of course that was putting strain on my back and over a period of time my back just blew."

She ended up in hospital overseas, and was told by doctors there her artificial leg was the wrong fit.

ACC accepted her treatment injury claim, which states she: "clearly has ongoing mechanical back pain and some right leg symptoms related to the positioning of her prosthesis".

Amputee Diane Smith is now one of several who get flights paid for by ACC to be treated by a private provider.

"My stump is about 23, 24 centimetres and they had me in a 19 centimetre liner and socket which then sucked the life out of me, caused me massive problems.

"I had high blood pressure, I was getting haematomas and one of them exploded, I got septicaemia."

She said she still wanted a government inquiry into the service.

"The government has to do an inquiry into the running of NZALS. There's harm getting done to amputees, and it's obviously acknowledged when people are getting treatment injury claims accepted. You don't get that accepted if there's no problems. And there is problems, it's physical and mental."

New Minister of Social Development and Disability Issues Carmel Sepuloni said she was very concerned about the issues raised and would strongly encourage people who felt they had been mistreated by the service to make a formal complaint to the Health and Disability Commission.

She said the commission's investigations would establish whether there were any grounds for an inquiry.

Meanwhile ACC, whose only contract for prosthetists is with NZALS, plans to open contracts to tender early next year after complaints like Ms Smith's.

NZALS Sean Gray has been NZALS's chief executive for three years, and said he was not afraid of competition.

The service itself has made 15 external referrals in the past year, but Mr Gray said that was not because NZALS staff lacked the same skills.

"The reason why you want to have diversity in your service offering is so you can provide people with choice and opportunity and sometimes an external person is what is needed to see the patient's problem from a different light."

"You know, this is not an exact science in the field of prosthetics and orthotics. Every patient is different, so we need to understand that and we also know taking different health professionals with different views and opinions may be a good thing."

He said while all prosthetists were qualified or had experience to meet the industry recognition, there was no qualification offered in New Zealand for technicians and the self-regulated profession largely trained on the job.

He stressed the service now had an external company conducting surveys, which returned about a 90 percent satisfaction rate, and said he wanted to know if amputees were upset by their treatment and encouraged them to come forward.

"If people are struggling and frustrated, reach out to us. I want to hear ... if things are not working we want to know."

Mr Gray welcomed amputees' feedback and said he'd learnt a lot from Ms Hansen's feedback, including the need for a better complaints process, how to responsibly provide second opinions, to consider external providers, and to embrace the audit review process.