The Ministry for Primary Industries will work with Auckland Council over a decision to close the Waitakere Ranges to prevent the spread of the kauri dieback.

It follows an Auckland iwi's call for the government to use the Biosecurity Act to enable a rāhui, stopping people entering the ranges. 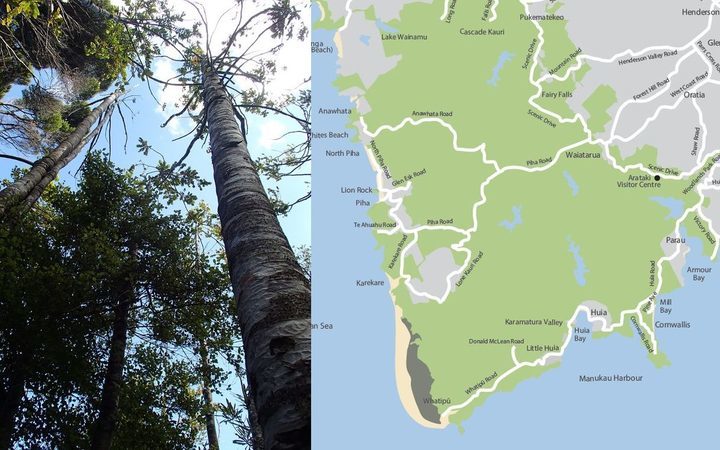 Kauri dieback affects many of the massive trees in the Waitakere ranges. Photo: RNZ

The ministry is able to declare controlled areas under the Biosecurity Act 1993, and MPI principal adviser conservation Erik Van Eyndhoven said it had previously used notices to manage biosecurity pests such as the Queensland fruit fly.

"The Ministry will work with the Council to look at the feasibility of this and the requirements they feel would be effective in helping to manage kauri dieback," Mr Van Eyndhoven said.

He believed it would be more effective than Auckland Council's current measures, which include increased signage and shoe-cleaning stations on tracks.

"We were getting tired of endless meetings and endless reports while, in our view, the forest continued to die."

Bryan Moore has lived in Titirangi for the last 25 years and knows the walking tracks around the ranges well, having often worked on predator control programs there.

He said if current council control measures weren't effective, a rāhui would help to safeguard the ranges for future generations.

"I'm not against it but I'd like to see money go into continual research of the problem," he said.

"But I'm certainly not averse to having the trails closed off for a indefinite period while we do more scientific investigation.

The easy public access to the ranges was both a blessing and a curse, Mr Moore said.

"I think we're extraordinarily lucky to have this public reserve on our doorstep. It's so accessible, and that's part of its problem ... but it's incredibly important to protect the ranges."

One of the key areas of research Mr Moore wanted to see was more emphasis on was transmission of kauri dieback in the ranges - including on whether wild pigs could be spreading the disease.

Gary Johnson from Te Atatu is a frequent visitor to Tītirangi and he supported the idea of a rāhui being put in place - saying the short-term inconvenience of its closure would benefit the ranges in the long run.

"It would be a shame and a travesty for something like that to take hold and kill those beautfiul trees. I think the tracks should be closed off if it's going to preserve a heritage of New Zealand, really."

At Arataki Visitors Centre, Teoh Pay Ngo from Singapore was wrapping up her holiday in New Zealand and said a rāhui should be put in place if it was one way to keep kauri dieback at bay.

"You all should close the park to protect your environment, to prevent the spread of the disease."

The council has not yet decided to back a rāhui despite Te Kawerau-ā-Maki's stance, but would be working with iwi to see how it could be supported, a spokesperson said.