A Christchurch flying fox has generated noise complaints from nearby neighbours and despite attempts from the council to tame it, nothing has worked.

The moving part of the flying fox was removed just a few months after it was built last year, following complaints from those living within about 20-metres of it.

The council has spent just over a year trialling new mechanisms, but to no avail. 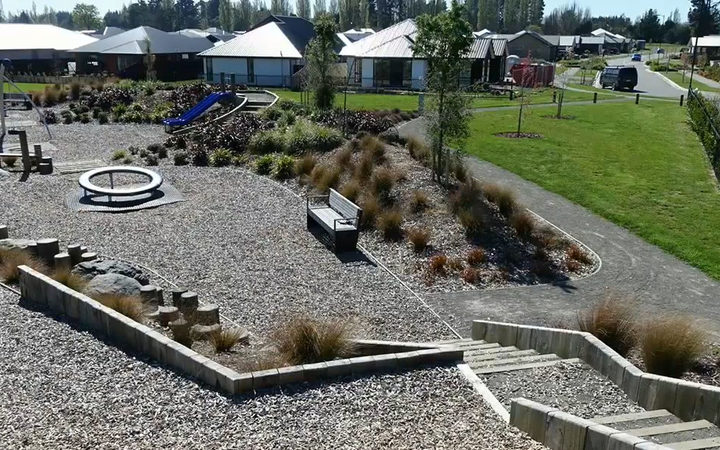 The Christchurch playground where the flying fox is located. Photo: RNZ

The ward councillor David East says the community board will vote on Monday on a staff recommendation to rip up the flying fox completely.

"Acoustic results seem to be just over or just under allowable levels in daylight hours but do not in any way meet the night time hours."

He said another issue was the mound the flying fox stands on, which was giving a view into peoples' homes.

"We're talking a very narrow reserve here and this mound, when you're sitting on top of it, you're actually looking right down in to the living and bedroom areas of a couple of adjacent houses."

None of the residents living closest to the playground were home when RNZ came calling on Friday.

Jessie Davison, who lives about 50m away and has two young children, says the flying fox should stay.

"It is definitely a noisy flying fox. It didn't bother us but I know there are quieter alternatives out there. So it would be nice to think we could come to some kind of compromise with a quieter flying fox."

She did not see the mound as presenting an intrusion in to peoples' privacy.

"Absolutely not, I'm really surprised. I guess it's a new subdivision so with a bit of planting and some time, i'm sure that wouldn't be too much of an issue."

Another resident who asked not to be named says most in the neighbourhood want to see the flying fox stay.

"We're all disappointed to see it going. We can empathise with the people who are really close to it and that is unfortunate but I suppose when you buy near a park, you're near a park.

He said being in a new subdivision it was important the community had somewhere that acted as a focal point for people to come together.

Monday's community board vote will be on permanently removing the flying fox with an option of directing staff to investigate other parks where the flying fox could be re-located to.