A man whose home was damaged in the Edgecumbe flood is disgusted after being told he has to pay three times his usual insurance premium. 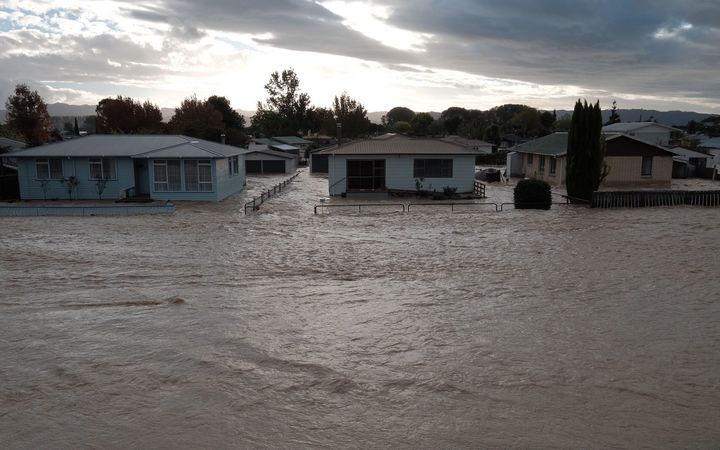 Many of the town's houses were flooded in April. Photo: RNZ / Brad White

Val Weir's Tawhara Place home is still uninhabitable after it was flooded when the town's stop bank burst in April.

While insurance claims for his car and contents went without a hitch and his house repairs have been paid for, Mr Weir got a nasty shock when he went to renew his Tower home insurance policy.

He said there had also been a $10,000 flood and landslip excess added on.

"I'm 80 years old, we're on a pension, that's over $100 a week. Where does a pensioner get that money from? Or anybody for that matter?

Mr Weir said that after complaining his policy had been dropped to just over $3000, but that was still twice what it had been and what he'd been quoted elsewhere.

"They said, 'oh well the reason it went up was because you lost your no claims bonus'."

He said he had not heard of anyone else having similar increases and local insurance brokers spoken to by RNZ said it appeared to be an anomaly.

"I find it difficult to believe, in fact it's outstanding. It's incredible.

"Normally a no-claims bonus is maximum of 60 percent of the company premium, that's without earthquake and fire service levies, and GST etc. So if you lost that it still doesn't come to 600 percent does it?"

He said not much had changed with insurance policies for local houses since the floods.

"We've had no changes because of the changes with current clients. In fact we had a house renewed in September and there was no change in premium.

Tower said it had worked with Mr Weir to reduce his premium, but the price increase was due to things like his property's risk and the removal of his no-claims discount.

It said there has been no blanket increase for Edgecumbe, however it indicated there could be some prices going up.

"On average, due to higher reinsurance costs and the increased risk, customers in the region could expect prices to increase by around 15 to 30 percent, with customers in areas of significant risk sometimes experiencing larger increases," a spokesperson said.

"In addition there has also been an increase in Fire Service Levy and EQC charges this year.

Tower said it had settled almost half of house claims in Edgecumbe and was on track to get most, including Mr Weir, back in their homes by Christmas.

AA insurance said it did not plan on increasing premiums as a direct result of the Edgecumbe flooding, saying it already factored those types of weather events into its policies.

A spokesperson for IAG, which owns NZI, Lumley, State and AMI, said it had no immediate plans to increase costs at this stage.

Insurance Council chief executive Tim Grafton said it was not aware of a blanket insurance premium increase for Edgecumbe residents.

"Each insurer decides their own appetite for risk and how they price that," he said.