More SaveMart employees say they were threatened with redundancy after complaining of rough working conditions, including dealing with broken glass, sex toys and dirty nappies, without access to gloves.

John Campbell went to the New Lynn store, where hundreds of bales of clothing sat in a storage area, to talk to owner Tom Doonan.

The owner of SaveMart, a clothing recycling business that donates a percentage of its proceeds to the Child Cancer Foundation, Mr Doonan has refused to talk to Checkpoint about a dispute with workers at a store in the Auckland suburb of New Lynn.

Workers said they were exposed to health and safety risks as a result of having to search the contents of clothing bins with their bare hands.

The staff in New Lynn who complained were all union members and now face redundancy, although First Union are talking to SaveMart about preventing that. 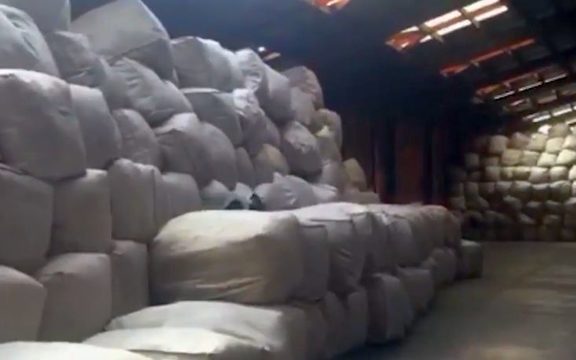 Some of the hundreds of bales of unsorted clothing at the New Lynn branch of Save Mart. Photo: Screenshot / Checkpoint

After Checkpoint's reports on the dispute last week, more SaveMart employees have spoken of similar conditions, including at stores in Levin, Napier, Tauranga and Christchurch.

Despite the company's claim that gloves were always available to employees who asked for them, all of the workers said they were "absolutely not" allowed to use gloves while sorting through clothing bales.

"The gloves were never supplied, they were never an option," said one worker.

"Even if we asked for them and that was when they said 'this is what your job is, this is what you're doing, no, you're not getting gloves, and no masks'."

Workers at one store said they did not have hot water to wash their hands after sorting the clothes.

The employees said they were told not to use gloves so they could tell if the clothing was damp before the unwashed items went up on the shelves.

A former employee at the Napier store said they eventually complained and brought in the union, but the store was closed down and they lost their jobs, only for the outlet to reopen again with new staff after several months.