No gloves despite soiled goods - Save Mart workers say

Save Mart workers sorting donated items say they are barred from wearing gloves despite dealing with things like soiled underwear and used vibrators.

The workers say they are threatened with dismissal if they complain.

Save Mart - which has 31 stores around the country - sorts and sell clothing donated in the blue bins found in many neighbourhoods in New Zealand.

Some of the proceeds go to the Child Cancer Foundation but Save Mart is also a business, with many staff earning minimum wage and several complaining about inadequate protection offered to the workers who empty the bins. 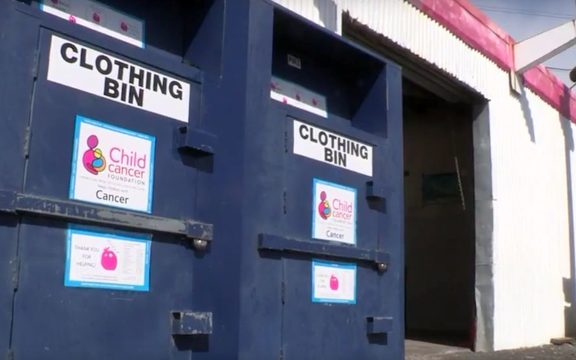 The workers - who did not want to be named - told Checkpoint With John Campbell they had come across used vibrators, hospital clothing with bloodstains on it, dead rats, kitchen rubbish, broken glasses, soiled nappies and used needles.

"You've got to watch what you're picking up."

Despite the material they are handling, the workers say they have been specifically told they cannot wear gloves.

"When I first started we were told we weren't allowed to wear gloves, because we couldn't feel whether the clothing is wet."

The workers say they have queried it as a health and safety issue, but were threatened with dismissal.

However, Save Mart has rejected the workers' claims and said gloves are available when required.

In a statement, owner Tom Doonan also said "everything is pre-sorted before it goes to the sorter".

"A lot of what we handle comes from charity shops."

First Union organiser Graham McKeen said he has been aware of the complaints since April, and has attempted to get in touch with Save Mart but they have ignored him.

"I had no response from the company at all ... I went back on the 9th of June and hand-delivered [a] legal letter ... I've since gone through a number of email exchanges, of which I've had no response. I finally got a response by fax saying the company has blocked my email."

Mr McKeen said while workers would like a pay rise, First Union's involvement was chiefly to ensure they were being treated according to Health and Safety laws.

He said Save Mart had utterly refused to engage with the union on any level.