Two Fonterra truck drivers were humiliated after being stood down from their jobs for being overweight, says their union.

The drivers have collectively worked for the company for 20 years, but were stood down three weeks ago after the company cited health and safety issues regarding seats on two models of trucks. 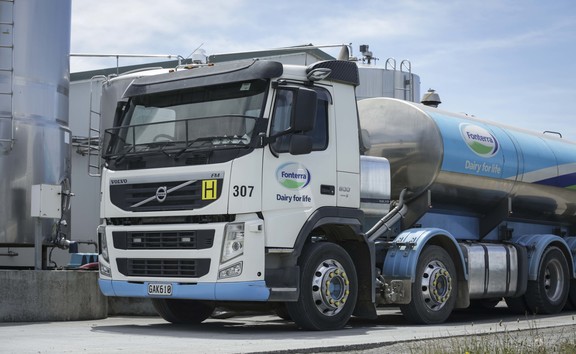 The drivers were too big to safely drive their trucks, claims Fonterra. Photo: RNZ / Rebekah Parsons-King

Union delegate Mark Holmes said the pair weighed what they did when they were first employed by Fonterra, and there had been no issue with the seats in their trucks.

He said one had been with the company for seven years and the other for about 13 years, and had not gained weight in that time.

He said while Fonterra's actions were well-intentioned, they had been poorly executed.

"They've pulled them off the road, they've given them no alternate work, so they've just been sitting there.

"Up until yesterday, there was no plan going forward about putting them into a Weightwatchers programme or into a gym programme, which I understand they want to do, which is great and I support it. But they've done this too soon."

"The truck manufacturers have said to us there is a weight rating limit on the seats the drivers are in, and if you're on that weight, the safety functions of the seat may not necessarily perform to standard in a serious accident."

"As a result of some investigations into the safety of our drivers, the truck manufacturers have said to us there is a weight limit on the seats that the truck drivers are in.

"And if you are beyond that weight, the safety functions of the seat may not necessarily perform to standard in a serious accident.

Mr McColl said people above the recommended limit could get more seriously hurt if something went wrong. The seat would not break but it could mean the safety features of the seat would not do what they were meant to.

He said they had only become aware of the weight restrictions last week.