High school students are gearing up for ball season but one South Auckland school is trying to keep costs down.

James Cook High School in Manurewa have set up a Ball op-shop, thanks to donations from the public, where students can hire out an outfit for the big night.

In a room at the back of the school are clothes racks filled with dresses and suits. Jewellery and shoes are laid out for the girls and make-shift dressing rooms help to guarantee that those wanting to go to the ball will have something to wear.

"We've set it up so that anyone in our school can come and have a look. Come and try them on - if they don't want them that's fine. Otherwise they just sign a form that they can take them for the night and bring them back a week later," year 13 student Ashleah Bellve said. 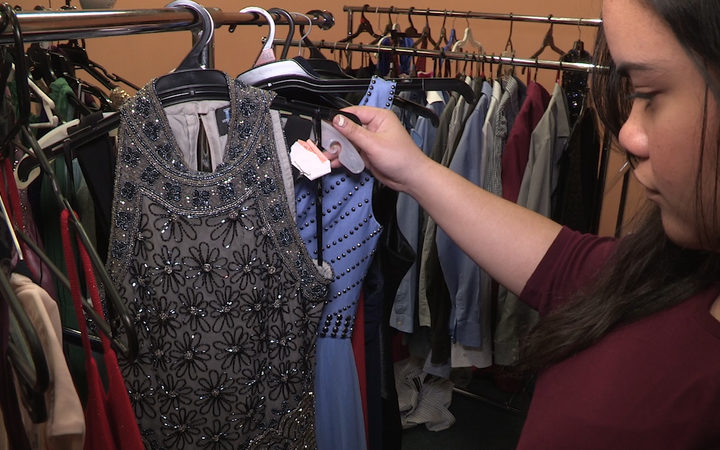 Principal Grant McMillan said the donations were flooding in.

"I believe about 150 dresses have come through already, about 30 shirts, there's been a dozen and a half suits, there's been shoes and other things as well. And it looks like over half of those things have also gone out again to families and to students."

He said Manukau Institute of Technology had also contacted the school, offering free hair styling for up to 70 students.

Another year 13 student, Sialafua Tuu'au, said she had visited the shop but had not found the right dress yet.

"I haven't really found my size so I will be back next week to have a look because usually everyday there's new stock coming in."

Balls could be really expensive, especially for one night, Ms Bellve said.

"Dresses range anywhere from $80 to anywhere up to $500. I know girls have told me about their dress prices. And then shoes are like $50, makeup can range from $50 to $200 so it can get really expensive."

Because of that, this was a good opportunity for people who did not want to spend as much money but "still have a good time," she said.

Miss Tuu'au said she was looking forward to the evening after a stressful experience last year.

"We had to go to different ball dress shops and it was pretty hard. But this is like a closet, a school closet, where you can just try clothes on and then dress it up. So then it doesn't really look similar to anyone wearing it next year."

Year 13 student Brenda Paul said a few of her friends had found dresses at the shop.

"[They] come in here and then they'll go outside and tell all their friends about this if people don't know about it. And they'll come in and it just gets really packed in here - it's pretty good."

Mr McMillian said once the night was over he would talk to other local high schools to see if a central op-shop could be created for students in the coming years.