Saved by drone - the way of the future?

Drones could soon be used to save people from drowning at Auckland's treacherous West Coast beaches.

The surf club at Muriwai Beach is trialling the technology, which it says will allow lifeguards to spot people in trouble within minutes, drop flotation devices and talk them through a rescue from the air.

The beach is part of a rugged and notoriously dangerous coastline. Its raging surf and aggressive rips swallow swimmers and surfers every year. But Muriwai's unusual black sand, native bush and proximity to the city still attracts thousands of locals and tourists to its shores.

While the Muriwai Volunteer Lifeguard Service rescues around 100 of them each summer, sometimes it doesn't succeed.

Its former president and now head of drones, Tim Jago, said the loss of a kayaker two summers ago provided the impetus to seek new tools.

The rescue crews couldn't find him, despite relatively calm conditions.

"It was only when the Westpac rescue helicopter arrived 45 minutes later, and they provided that 'eye in the sky' capability for us, that we found the body almost immediately.

"That really rammed home for us the need to have ready access to [an] 'eye in the sky' out here." 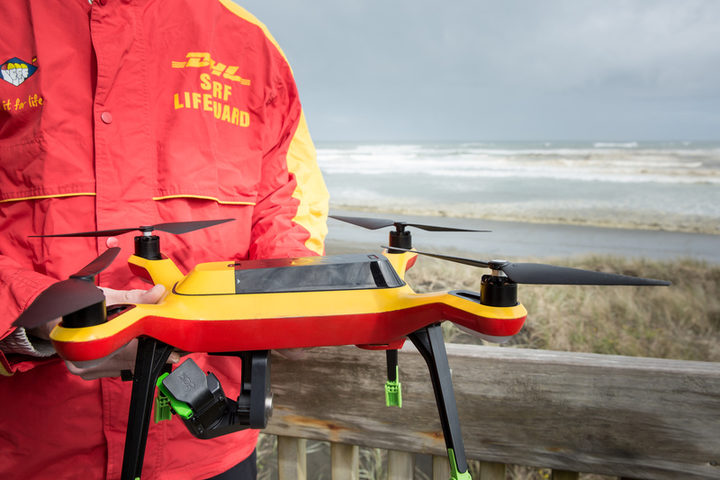 One of the drones being trialled. Photo: RNZ / Claire Eastham-Farrelly

There were a multitude of challenges at Muriwai, including ragged rocks, poor visibility and wild weather, Mr Jago said.

On a good day, a helicopter could still take 17 minutes to get to the beach so a drone could be the difference between someone drowning and surviving, he said.

"We're two to three minutes from ripping open [the] backpack that these things will be stored in to the time we have them airborne."

The drones cost about $5000 each and just a few cents per hour to run, compared with thousands of dollars an hour for a helicopter.

The devices, which would be run by specially trained staff, would also cut risk for the lifeguards, he said.

With its wind, salt and water, the west coast's unforgiving conditions might present particular challenges for flying and maintaining drones, but the technology was developing rapidly, Mr Jago said.

It makes it one of the most difficult testing grounds in the country.

It is on the flight path to Auckland and is near the Whenuapai air base, with the defence bombing unit located at the far end of the beach. Beach-goers also kite-surf, he said.

"We've got to comply with all the relevant regulations and bylaws," Mr Jago said.

And for those worried about privacy issues: all footage would be wiped within days.

The club would not do anything to alarm or distress people, he said.

The head lifeguard at the club, Oliver Tyack, agreed drones would make their jobs easier, especially during the glare of evening sun strike.

It would also provide a new opportunity for others wanting to be involved in rescues.

Mr Tyack believed the drones would be beneficial for everyone and provide an extra sense of security.

It would rely on donations and sponsorship to fund the project.